A Fireside Chat with Yo-Yo Ma

There is nothing that requires more trust than working in a musical situation together. You just have to rely on each other for everything. It is constant fluidity.

What can you say about a man who has become a pop culture icon? That is exactly what Yo-Yo Ma is. Not only is he the premier cellist of his and my generation, he is also the subject of a Seinfeld episode (or at least his name was). That is immediate inclusion in pop culture history. But musically, both classically and otherwise, Yo-Yo Ma has continued to extend the boundaries and conventions of just we are taught to perceive is classical music. Yo-Yo Ma has essentially brought classical music into a time where Joe Millionaire is the top rated show and Lord of the Rings is not a book, but a movie. In fact, Yo-Yo Ma has done more for classical music than anyone in recent memory. He is beyond genres, beyond history, beyond cultures, and beyond predictable. Take his latest offering, Brazil, his first foray into Brazilian music. It was an honor for me to have Yo-Yo Ma as a guest on the Roadshow, as always, unedited and in his own words.

FRED JUNG: Your new release, Brazil, documents your interest in the music inherent to that country.

YO-YO MA: With almost anything, there are probably a lot of beginnings. The interest from the broadest point of view, I remember always being interested in Brazilian music from the time when I had a little transistor radio and would kind of listen at night before falling asleep. Twenty years ago, Aldo Parisot, who is this great Brazilian cellist, teaches at the Yale School of Music, but friend of Villa-Lobos, said that I had to know more about Brazilian music. You have to go to Rio. You have to go to the library and discover his music. More recently, Oscar Castro-Neves, who I was working with on this Astor Piazzolla album, we were in Argentina and he spent a lot of time while we were exploring, just talking to me about how he as a seventeen-year-old guitarist hooked up with Jobim and worked on things and just talked to me about Brazil and what it meant to him. He is an elegant gentleman, very wise and very generous. So I started thinking about it. Over the next number of years, listened to a lot of music and then fell in love with Rosa Passos' voice and thought of including her. Listened to Gismonti and wanted to do something with him and the same thing with each person. It just gradually accumulated.

FJ: Did you have to augment your approach to the cello?

YYM: Absolutely. I come from the school of thinking that to actually learn, and this is the way I have learned anything in life, anytime I learn something and felt that I could participate in a style was because someone took me there. I had the best guide to take me into a language, a style, a country, and a way of thinking. It happened with Edgar Meyer and Mark O'Connor for Appalachian Waltz. It was meeting all the musicians that worked with Piazzolla that got me there and listening to tapes of Piazzolla talking. With Brazil, it was Oscar. It was Mark Suter of The New Power Trio. We played in the Silk Road Ensemble together. But Mark lived in Brazil and Cuba and he, as a percussionist, showed me physically and describing what he thinks of phrasing in a groove, and then finally when I met Cyro and Paquito, it was their incredible generosity and warmth and mastery and willingness to be festive and share that got me through the hump, where I felt I could jump in and swim. 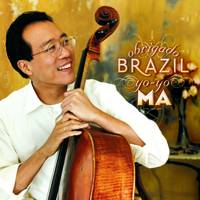 FJ: Are you comfortable with the term "crossover," which has been almost overused in reference to your more recent projects?

YYM: I have a very simple way of working and the simple way of working is this, every time I do something in music, I make sure that the thing that I am doing is not the end, but the beginning. What I mean by that is things have to develop organically and it doesn't make sense if someone sits in a boardroom and says, "We need one of this and one of that." People have to choose each other. There is nothing that requires more trust than working in a musical situation together. You just have to rely on each other for everything. It is constant fluidity. If you don't choose each other, how can you develop the trust? In terms of what I have said to my friends in this recording is that the end of this recording is the beginning of our relationship. We are going to know each other for the rest of our lives and will partake in each other's musical lives in one way or another over and over again. That is what is so nice about longevity.

FJ: Your cello is an integral part of the narration of Crouching Tiger, Hidden Dragon. How do you approach not merely background music, but being essentially what amounts to a voice or character in Ang Lee's film?

YYM: That is a very good question. Working on any film score makes you a part of the largest group of working people that I have ever been part of. It is bigger than an orchestra. In the films that I have worked on, Seven Years in Tibet, Crouching Tiger, everybody has worked very differently. What was neat about the Crouching Tiger score was Tan Dun wrote very little and he is very free with his writing. Ang Lee was at the recording session and we were recording late into the night and it was like playing with two directors, because there was a composer and director, which was wonderful because you have to find the middle ground that would satisfy both. Having the director is a great addition because you get a piece of his vision before you hear it in its final form.

FJ: Much like Pavarotti has sustained a lengthy relationship with London/Decca, your association with Sony Classical is just as significant. What autonomies does such a matrimonial accord allow?

YYM: I think there is a certain wonderfulness about feeling that there is a home that you work from. Having continuity is wonderful. The hope is that you have a stable of people that love to work with one another so that within a grouping, people can continuously choose to find and re-find one another.

FJ: Will you do a jazz recording?

YYM: I have to tell you, Fred, that I love jazz. I also know how specific jazz is. I think it would depend on the comfort level and I certainly would love to experiment because I love to do that anyway. In terms of the specificity, it could be. Let me give you an example of a direction we are trying to head in. We have this Silk Road Ensemble. We have people that are actually really good jazz musicians within the ensemble. We just came back from Central Asia and we did workshops there and we were actually asked to say something about once we left, what is it that we leave behind that is sustainable. We came up with the following template for what we think all musicians need. Let me try it out on you, Fred. A musician needs to know a tradition deeply, any tradition. The next thing they need to know is to be able to work with somebody from any other tradition and in a short time, through improv, through whatever means, jamming, make it work. The third one is that you have to have the wherewithal that you have the ability to transmit the knowledge that you have to somebody from another place, another generation without you necessarily being there physically. You need to be able to find a way so that the knowledge gets transferred organically to somebody else. Those are good goals.

FJ: You are the preeminent cellist of my generation and have become a cultural icon. Somewhere in that time, you have also managed to raise two children, who are essentially grown up to a degree. Can you sleep in now?

YYM: Fred, you hit the nail on the head. My wife and I looked at each other this year. I think this is literally, the first year in twenty years where we didn't have both children in the house all the time, which meant getting up at six in the morning, getting them dressed, homework, getting to bed later and later, and up earlier and earlier. I feel like I am twenty years old again (laughing). We can have a cup of coffee. We can have a second cup of coffee. You can get up late. You can have friends. There is nothing harder, and I would say this for any parent in today's world, to do the balance. That is harder than learning any musical style.

FJ: To have your name mentioned on an episode of Seinfeld signals that you have reached a mountaintop. When you have time to reflect, all the sacrifices and effort sustain meaning.

YYM: What is nice about this profession is that people forget (laughing). You do something for a while, you kick the bucket, and it is gone because other people have new things to say and different ways of saying things. The best you can do is take care of your family. Seriously. There you actually have influence. The thing that I would hope most is that along with political and economical engines, that cultural engines are taken really seriously. That is the part that is missing when things break down. It is when people haven't adequately considered what are the cultural engines that bind people together.

Visit Yo Yo Ma on the web at www.yo-yoma.com .