By DAVE WAYNE
November 8, 2015
Sign in to view read count 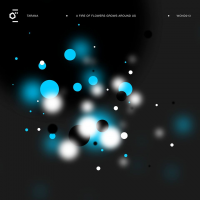 Musical explorations never cease. Jazz musicians are, by nature, curious and intelligent people who listen to and—for more than just economic imperatives—play all sorts of music. The farther musicians stray from their "home base," be it jazz or whatever, the deeper and richer their music becomes. The members of Tarana, Ravish Momin and Rick Parker, are a case in point. Jointly, they've gigged and/or recorded with Tim Berne, Sabir Mateen, the Mingus Big Band, and Kalaparusha Maurice McIntyre. They've also put in significant time working with Wu Tang Clan and Shakira. A Fire Of Flowers Grows Around Us is clear evidence that the duo's musical adventures in the non-jazz world instigated their use of pop and electronic music as raw materials for improvisational expression. Momin has actually been working with pop and electronica elements for quite some time, and has recorded at least four albums under the Tarana moniker over the past decade or so. A Fire Of Flowers Grows Around Us is the debut of the duo with Parker, and marks the first time Tarana has included a horn player.

First impressions being what they are, the surfaces of Tarana's music bear an unmistakable resemblance to electronica. The duo's music simply would not be possible without electronic processing, loops, samples, and synthesizers. Tempos are slow-to-moderate. The influence of iconoclastic visionaries such as Brian Eno, Lee "Scratch" Perry, Bill Laswell, and Nils Petter Molvaer loom large here. Tracks such as the plodding, malevolent "Safar," the gauzy, Middle Eastern-influenced "Tehrah," and the urgent, extraterrestrial grooves of "Batik" and "That Tweaky" orbit close to Laswell's sound-world, while not being subsumed by its gravitational field. On the other hand, the catchy melody of "Gara Guna" is, itself, manipulated and morphed in a way that directly related to dub reggae. Like Molvaer's electronica- infused trance music, Tarana's music moves the body as it tickles the mind.

Parker's trombone sound is electronically modified in a way that many would say resembles Miles Davis' plugged-in sounds of the mid-1970s. But that's just the surface. Really, what Parker is doing here, primarily with chorus effects and digital delays, is much more akin to the work of J. A. Deane and Jon Hassell. The instrument is just a source; the core elements of the music are generated by electronically manipulating that source sound. Similarly, Momin creates rhythms, bass lines and other sounds using a wide array of loops, samples, triggers, electronic pads, and an acoustic drum set. In fact, the electronic sounds here are so carefully layered that the acoustic drums seem almost disruptive. It's an effect that Momin uses often, and quite well.

Though Tarana's music has the feel and sound of electronic dance music, improvisational elements are still a crucial part of A Fire Of Flowers Grows Around Us. This music is made in real time: that much is palpable, and live performances of the duo have all the sweat and soul of real in- the-moment music-making. Lacking drum fills, solos over changes, swinging bass lines and such, it's difficult to call Tarana's music jazz. But it's also difficult to imagine that it matters anymore.