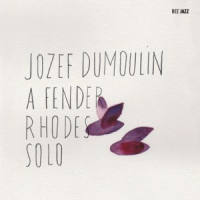 Belgian keyboards player Jozef Dumoulin describes his new solo album, his first solo album, as the the first solo album in the history of the electric piano, the Fender Rhodes. It is also a culmination of a long exploratory journey into the various, weird, eccentric sonic qualities of this vintage instrument, enhanced with electronic effects.

The versatile Dumoulin developed a highly personal voice on the keyboards, including the Fender Rhodes, that always flirted with experimental sounds, whether he played with mainstream jazz musicians as saxophonist Mark Turner or pianist Bill Carothers or with innovative improvisers as guitarist Marc Ducret and saxophonist Ellery Eskelin or with his own trio,

Dumoulin says that he never planned consciously to research the Fender Rhodes sonic possibilities but slowly, organically studied more and more on its myriad characteristics. When he decided to record a solo album of the Fender Rhodes he insisted on four constraints—to use the Rhodes and only the Rhodes, to only record improvisations, to isolate tracks within 'regular' duration within these improvisations and to avoid overdubs. Dumoulin allowed himself to add any effects that may fit to each improvisation.

Dumoulin takes the Rhodes to new sonic terrains, liberating it completely from any funk, psychedelic, fusion, rock or jazz associations, and suggests evocative, often enigmatic and cinematic soundscapes. On the 16 concise improvisations recorded in his home he emphasizes the Rhodes almost infinite, resonating and vibrating possibilities while sustaining the instrument sounds, turning these mellow sounds into a meditative, drone improvisation with a series of overtones on "Observing Disorder" and atmospheric, space journey on "Sungloves"; investigates the options to distort, mutate and color its deep sounds with darker, disturbing shades as on "Warm Black" and "The Red Hill Medicine," and structures subtle dramatic narrative as on "The Entry Point."

Eventually Dumoulin succeeds to transform this instrument to a machine that generates experimental sounds that partially brings to mind sounds emanating from the sixties and seventies, the golden age of the Rhodes, but more as futuristic, otherworldly ones, still, all sound fresh.