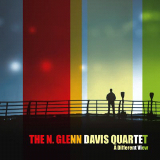 Some drummers have a tendency, whether deliberate or involuntary, when leading an ensemble to turn the spotlight on themselves. Not Glenn Davis, who lets his splendid compositional skills and purposeful timekeeping speak for themselves on A Different View, on which he leads a crew of fellow Clevelanders in an enticing session of buoyant post-bop Jazz.

Pianist Larry Porter, a longtime friend who now makes his home in Germany, is a clever soloist and perceptive accompanist, splendidly complementing front-liner Dave Sterner who triples on alto, soprano and tenor saxophones. Rounding out the quartet is another seasoned pro, bassist Dallas Coffey, with whom, Davis says, he has played "hundreds of gigs." The rapport and camaraderie is palpable throughout, as everyone plays his part well while taking care not to intrude on anyone else's space.

The program consists of ten compositions by Davis as well as Porter's "Eadie Is a Lady," written for the pianist's mother who passed away shortly before the recording was completed. While none of these tunes is likely to become a jazz classic, neither are any less than well-designed and invigorating. The sense of variety that imbues the session is underscored by shifting moods and tempos and by Sterner's impressive versatility. Best known for his fluency on alto, Sterner plays that horn on five selections, soprano and tenor on three each.

The group enters swinging on Davis' buoyant "Happy People" and exits the same way, laying down a relaxed yet breezy groove on "It's Late." Other highlights include the boppish "Sliding," easygoing "Hometown Waltz," cheerful "Ashley's Samba" and syncopated "Bright Roads." A sharp and synchronous quartet that makes listening a pleasure.