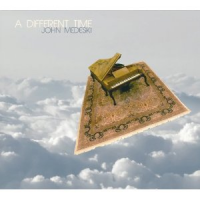 John Medeski's A Different Time certainly lives up to its title. It is both everything and nothing like what might be expected from a musician whose stock in trade is a concerted effort to avoid the predictable, as a charter member of Medeski Martin & Wood, in the course of his many live solo efforts and in group settings with guitarists Will Bernard and David Fuczynski or last year's tribute to Tony Williams Spectrum Road.

As such this solo piano recording bears little of the familiar influences (Thelonius Monk, Art Tatum) Medeski has utilized to forge his unique approach to the keyboard. "His Eye Is On The Sparrow" does evince the gospel strains that weave in and out of Medeski's playing (and for the foundation of his collaboration with The North Mississippi Allstars and Robert Randolph in The Word). But most of this album, such as its opening title song, is comprised of the bell-like clarity of the Gaveau piano with which Medeski recorded these nine tracks after the project initially appeared complete.

The delicacy of touch required by the historic instrument elicits a fastidious approach in which John Medeski's patience comes into full play to allow the notes to ring in the air. It's an effect all the more engrossing when he's in the high registers, as on the one other cover tune here, Willie Nelson's "I'm Falling in Love Again." This versatile keyboardist usually thinks and plays with lightning speed, so not only is his more unhurried approach here a marked change of pace, it's an all-together remarkable illustration of the breadth of his technique and the command of an instrument that, prior to these sessions, he had never utilized.

Acting upon the suggestion of producer Henry Hirsch to play the rare 1924 instrument is an expression of Medeski's improvisational nature, not to mention his self-confidence. "Luz Marina" and "Ran" sound both fresh and fully-thought out, a testament to this musician's well-developed improvisational sense as well as his ability to immerse himself in the moment(s) of his actual playing. This music radiates a vibrant quietude, as the sounds of the piano seem to echo out off and around the surrounding tranquility of the nighttime sessions.

As such, it's virtually impossible not to get caught up in the mood of A Different Time. Stark though it is, the sound of this acoustic instrument billows throughout the course of the CD's playing time, the cumulative effect discernible as the tracks progress toward the ending represented by "Otis," a twenty-one year old original that first appeared on the MMW debut Notes from the Underground (Gramavision, 1992). Given that a healthy portion of this music is wholly improvisational makes it all the more enthralling, even if you're familiar with the bountiful imagination of John Medeski.

A Different Time; I'm Falling In Love Again; His Eye Is On The Sparrow; Ran; Graveyard Fields; Luz Marina; Waiting At The Gate; Lacrima; Otis.