Phil Traynor: A Dichotomy of Silence 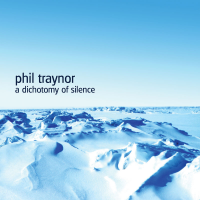 Phil Traynor's debut release on his new independent label, Llarion's Lair Music, is titled A Dichotomy of Silence. Traynor became relatively well known to a significant number of worldwide listeners because his music was initially distributed exclusively on the internet. The realization of this album in CD form demonstrates how technology has given more musicians access to professional production and distribution. This project is well done and could easily find a happy home in most any smooth jazz lover's CD collection.

The opener, "Dewpoint," settles into a comfortable groove. The mood is peaceful, as the title might suggest, however there is enough spice within the unique chord progression to draw the listener into the inviting guitar work of New Jersey native John Kelly. "Sunday Morn'" features another New Jersey native, Mike McKinley, on two noteworthy guitar solos which present his versatility in performance styles. Again, the listener is invited into the music without being overwhelmed by simultaneous complexities. The smooth groove and uplifting mood of the music stand foremost.

The next tune, "Across the Miles," features Traynor in several roles. The haunting (and mostly improvised) muted trumpet sample does indeed recall the later contemporary work from the great Miles Davis. Traynor's fans should enjoy this one too. "Shades of Gray" features another smooth jazz groove with synth melody and pads, punctuated by electric guitar. A melodic bass solo highlights this piece, along with a Joe Sample-like rhodes piano solo.

A personal favorite, "Legacy #5," captures the unique smooth jazz concept that Traynor has displayed glimpses of to his online listeners for a few years. A nice song to listen to while doing most anything in your life, from driving to dining to just "chillin' out with loved ones and/or good friends"...

"Footsteps" follows in the similar mold of legacy... Those who enjoy the music of Oregon, Paul Winter, or Paul McCandless will appreciate the mood of this song. Rick Garner presents another thoughtful solo here with an able demonstration of his roots in the blues, along with his own unique and versatile artistry. "Aicha" is probably the most "urban sounding" piece on the disc, with its Latin groove and darker mood than most of the other compositions here. A nice change of pace.

"The Night We Met" is the closest thing to a ballad on A Dichotomy of Silence. The bass maintains the pulse with no percussion during the entire song. Another interesting aspect about this piece is the combination of digital instruments with instruments (other than keyboards) played by a human. The impact of the piece recalls a Bob James-like presence... The groove tune "To the Summit" has a melody that recalls influences of soul music from the late 1960s - which is cool. Again, the listener isn't necessarily encumbered by superfluous material unrelated to the pulse and smooth vibe. It is a good finale to the pieces presented on this debut.

Most songs on this CD also come across as compositionally focused. The improvisations may sometimes wander beyond the point for some tastes, but the creative impact of the solos never loses focus. Listening to A Dichotomy of Silence elevates one's thoughts to just the music being shared.

For more information about this release and the music of Phil Traynor, visit www.llarion.com .