A Day With Dave Liebman 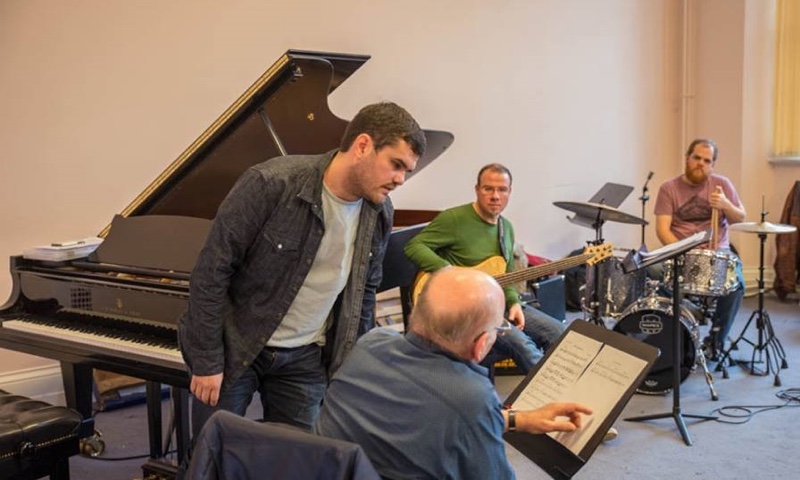 By IAN PATTERSON
February 16, 2016
Sign in to view read count

Bebop was the same thing over and over again. These days we have more colors, more timbral choices for the listener to respond to &#151Dave Liebman

Lasting the course in jazz, that's to say, building a successful career that, just like any other job, spans more than half a lifetime, brings with it a wealth of knowledge and experience. Sharing that knowledge with young, aspiring jazz musicians has long been a part of jazz culture, even if the mentoring role of myth and legend in late-night jazz clubs or 'on the road' has, so it seems, largely been replaced by college/university jazz programs.

NEA Jazz Master Dave Liebman has been giving back for decades, in a variety of influential roles. The multi-instrumentalist has travelled the world giving motivational talk inspired by his story; a pedagogue of international renown, Liebman's clinics and workshops also taken him far and wide; as a musician and band leader Liebman continues to explore the myriad avenues of music with the same passion and drive as when he first set out as a professional musician, almost five decades ago, in the bands of Elvin Jones and Miles Davis.

The National Concert Hall, Dublin, was the venue for an insight into the first two of Liebman's facets; a talk from the great musican about his life in music, followed by an ensemble coaching master class with young, up-and-coming musicians; an evening concert in Whelans brought Liebman together with some of the cream of Irish jazz.

The day-long program was the initiative of Improvised Music Company, founders of the 12 Points Festival and Down With Jazz and arguably the most important promotor of jazz and improvised music throughout Ireland this past quarter of a century.

"Well, let me welcome you properly," Liebman said to the audience, appropriately made up of jazz fans, students and musicians, before launching into an unaccompanied soprano saxophone solo. Without much preamble, Liebman explained his musical roots, with his mother a pianist and his father into Pyotr Ilych Tchaikovsky, Arturo Toscanini and Enrico Carusso. For Liebman, (b.1946) like so many of his generation, however, it was the advent of rock 'n' roll that set the cat amongst the proverbial pigeons.

Bill Haley's 1954 version of "Rock Around The Clock" (penned by Max C. Freedman and James E. Myers) grabbed Liebman by the scruff of the neck, in particular the tenor saxophone solo, played by Joey D'Ambrosio. "I loved the sound of it," said Liebman, "and I wanted to play tenor saxophone."

Liebman would have to wait, however, as his parents obliged him to study piano for two years first. Though it may have seemed like a drag at the time, Liebman remains eternally grateful to his parents for such a musical grounding. "It was the best decision of their lives," admitted Liebman, "because the piano is the gateway to musical knowledge."

Having complied with his parents' wish, at the age of eleven Liebman was ready to roll with teacher Nat Shapiro, who insisted Liebman study clarinet first for a year. Even today Liebman doesn't quite see the advantage of starting off first on clarinet, but regardless, a year later he was studying tenor saxophone.

Liebman recalled taking Saturday afternoons lessons at Carnegie Hall studios with Joe Allard, who Liebman describes as "the guru of saxophone instruction." Allard taught, amongst others Eddie Daniels, Steve Grossman, Michael Brecker, Harry Carney, and even John Coltrane took one lesson. "The long and short of the story," said Liebman, "is that it changed my life. That was pivotal."

If Allard's guidance gave Liebman the solid grounding in the mechanics of playing the saxophone, then a defining moment for Liebman came with seeing jazz live for the first time. On his first visit to Birdland on 52 Street, as a wide-eyed teenager, Liebman encountered the Gerry Mulligan Tentet and Count Basie's Big Band. Liebman was immediately hooked on the thrill of live jazz.

Liebman recounted returning to Birdland a couple of months later with his girlfriend, to see a double bill that featured the Bill Evans Trio and the John Coltrane Quintet with Eric Dolphy. "If there was an epiphany it was that night," said Liebman. "That night my life changed. I had intended to be a doctor. Not after that night."

Interestingly, Liebman's description of the Bill Evans gig suggested a less than ideal environment—of a retrospectively idealized time—from a musician's point of view. "You cannot hear a note," Liebman recalled of the evening. "It was Saturday night, people are talking...I'm talking too..."

The bebop, hard bop and 'New Thing' era of New York club jazz continues to be mythologized and perhaps even pined for by many of today's jazz musicians and fans alike, yet Liebman's picture of an environment so noisy that a piano trio was all but drowned out—and not just any piano trio—raises questions as to jazz's social role, the make-up of jazz fans and accepted protocol back then.

Not all musicians were as non-confrontational as Bill Evans. Famously, as recounted in Bill Crow's Jazz Anecdotes (Oxford University Press, 1990), Charles Mingus responded to a noisily self-absorbed audience in the Village Vanguard by saying: "Okay, we're not going to fight you. On the next number, we'll take turns. We'll play four bars and then you all talk four bars. Okay?" And as Crow relates that's exactly what Mingus and his band did; the audience, seemingly oblivious to its role, applauded at the end.

Crow recounts another anecdote whereby, in an unnamed club, a rowdy audience provoked Mingus to say: "As long as nobody wants to listen, we might as well get something to eat," whereby, the story goes, Mingus had the waiter bring food to the stage and the band duly ate for half an hour instead of playing.

In light of Liebman and Crow's anecdotes, perhaps it's little wonder that jazz musicians, critics and sympathetic historians alike, pushed for the music to be understood as high art—music to be respected and experienced in hushed concert halls—after all, how many jazz musicians could happily endure the noisy indifference of an audience night after night before jacking it in and looking for a day job?

Could it be that for some of its practitioners free-jazz was, in part at least, a voluble response to the seemingly not infrequent indifference of rowdy club audiences, where hipsters and revellers were maybe more interested in getting loaded and having a good time than listening to the music?

Coltrane—whose own ensembles got progressively louder and more intense in his final years—certainly impacted Liebman greatly; the rest is history. Liebman then went on to tell the National Concert Hall audience that his main mentors were Pete La Roca, (with whom Liebman played in 1969), Elvin Jones and Miles Davis (1970—1974), all three universally regarded as jazz masters; it's a title—often capitalized—that confers hefty status. As Liebman stated: "I'm one of the last to have gone through the system the way it used to be, which was of apprenticeship; you played with a master, you got accreditation first of all from the whole community, and business."

It might be a little disheartening for many jazz musicians to be made to feel that, in a sense, they have missed the boat. The master-apprentice legend, according to Liebman, seems to be regarded as the preserve of jazz's so-called Golden Age and a dying breed of trail-blazers. Of course, adherence to such legend is part of the canonization of jazz music and of its elder statesmen (women?). It's also a heavy legacy that today's musicians have to contend with to some degree, like it or not. How can an individual be acknowledged as a great jazz musician—never mind a master—without referencing the music's historically important figures, and without sacrificing their own inimitable identity?

In the Q&A session that followed Liebman's talk, one person asked Liebman how he would define the term 'master musician.' For Liebman, the definition was "head, hand and heart" -the perfect balance between knowledge, technical ability and feeling. Based on that criteria, there are an awful lot of jazz musicians out there today with important discographies who are surely worthy of access to the exclusive club of the National Endowment of the Arts Jazz Master, yet who have to scuffle to make a living. It would seem that there are other criteria involved as well.

Liebman shared some fascinating insight into the musical character of his mentors, in particular Davis; most of these anecdotes, and many more, are recounted and expanded upon in Liebman's fascinating autobiography What It Is—The Life of A Jazz Artist (Scarecrow Press, 2012) -wherein Liebman describes in detail his upbringing, his battle to overcome the obstacle of polio, his phenomenal—and surprisingly diverse career—his musical milestones and his relationship with some of jazz's leading figures.

It will come as no surprise to anyone present at Liebman's Dublin workshops/master classes that his entire career has been built on an extremely strong work ethic.

As interesting and as thought-provoking as Liebman's talk had been, the veteran's master class with three successive groups of musicians of varying degrees of experience gave real insight into the mechanics of sound manipulation and group dynamics.

All the musicians were, or at some point in recent history had been, students at Newpark Music Centre—the sole educational facility in Ireland to offer jazz studies. Whilst the opportunity to have Liebman offer his critical ear clearly doesn't come around every day, it was still brave of the volunteer groups to allow themselves to be put so minutely under the spotlight, and in front of an audience to boot.

The first group to experience Liebman's masterclass was CEO Experiment, a promising new band on the Dublin jazz scene, whose eponymous debut (Self-Produced, 2015) holds the promise of greater things to come.

CEO Experiment is an exciting trio still searching for its defining sound, though already on its debut album the one electronica-influenced track suggest avenues inviting further exploration. That the trio was prepared to go under Liebman's critical microscope is a healthy sign of a band open to new possibilities.

The second group featured pianist Luke Howard, bassist Daragh Kinch, drummer Jameel Matar and vocalist Conor Ryan—second-year students at Newpark. On hearing of the possibility of a masterclass with Liebman these students had come together just a couple of days before and consequently had little time to rehearse together. Their version of Wayne Shorter's "Footprints" lacked spark. Liebman suggested that both the pianist and drummer should sing their rhythms and then transform this to their instruments. Liebman also urged intensity from the cymbal as it enables greater room for manoeuvre for the other musicians. "The first thing I tune into is the cymbal," Liebman explained.

The second run through of "Footprints," with Liebman harmonizing with vocalist Ryan saw a complete transformation, with a greater sense of purpose from the band, greater rhythmic drive and more energy. "Any time you spend with your instrument is holy time," Liebman told the musicians, "but don't let your enthusiasm overtake your touch, your feel."