By DUNCAN HEINING
August 30, 2017
Sign in to view read count 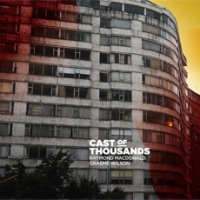 Raymond MacDonald and Graeme Wilson are two of the leading figures in the Glasgow Improvisers Orchestra. The music on Cast Of Thousands may be freely improvised but the emphasis here seems very much upon structure and form. One suspects that MacDonald and Wilson's lengthy experience playing together allows each man to trust the other and that it is this that gives A Cast Of Thousands its sense of completeness and coherence. Mutual awareness and communication are key to the record's success.

The opener "Montelimar," for example, has an appealing ballad-like feel, while "Thawing Out" and "Bongo Billy Up A Tree" both unfold like slow blues, even if the turnaround is prolonged almost indefinitely. Somewhat ironically given its title, "Slap and Wobble" has the quality of a berceuse at times, albeit one written by the Scottish eccentric Ivor Cutler.

Frequently on Cast Of Thousands, MacDonald and Wilson seem to follow different and divergent paths in their improvisations. This creates a kind of melodic and rhythmic counterpoint within the improvisations. On other occasions, as on "Bucket of Kimchi" and "Crow and Skylark," the impression is less of dialogue and more of glossolalia. At its best, which is often, one has the feeling that one is eavesdropping on two friends playing together. "On The Roof And Up the Stairs" illustrates this beautifully, as if MacDonald and Wilson are having a fine time pushing and goading each other.

Pondering its clearly ironic title, I found myself thinking of the afflicted soul in the Gospels, who, when asked his name replied, "My name is Legion; for we are many." On the other hand A Cast Of Thousands might equally illustrate the old adage—"Two's company. Three's a crowd." MacDonald and Wilson—men of a thousand parts.

Montelimar; The Bucket Of Kimchi; Thawing Out; Slap And Wobble; Crow And Skylark; Bongo Billy Up A Tree; On The Roof And Down The Stairs; Slinking; Romance Is Not Dead.