Random Touch: A Box And A Word

By GLENN ASTARITA
October 13, 2008
Sign in to view read count 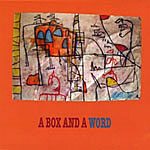 With its tenth release, Random Touch fires phasers and spews electronic sounds into the cosmos.  It’s as if they’re zooming into the outreaches of space via jagged angles, while all notions of physics are completely disregarded.  Nonetheless, the musicians embark upon a free-form, genre-bashing sequence of events.  On the opener, "Floating in a Spiral," they execute a broad, ambient soundscape that segues into avant jazz-rock amid bizarre movements constructed upon wily EFX-based maneuvers. class="MsoNormal" style="margin: 0in 0in 0pt;">The musicians implement spacey interludes while also dishing out a bevy of captivating evolvements, featuring crash-and-burn rock phrasings and harrowing spoken-word diatribes.  Occasionally they lower the temperature with ethereal passages smoothed by James Day’s endearing synth-generated sounds.  The quartet abides by an asymmetrical set of rhythmic flows, where sinewy keys and Scott Hamill’s ravaging electric guitar lines add a bit of angst to the overall program.  And they dissect time into minute fragments, due to their variable dynamics and quirky passages.  class="MsoNormal" style="margin: 0in 0in 0pt;"> class="MsoNormal" style="margin: 0in 0in 0pt;">It’s a fun-filled outing indeed.  In effect, the artists merge heavily distorted grunge-rock with progressive-jazz type proclivities and semblances of vintage, Brian Eno sound-sculpting methodologies.  Oddly enough, it’s a highly listenable outing, sparked by the musicians' zestful reengineering concepts and subtle surprises along the way.  Where many others fail miserably within these frameworks, this unit succeeds at carving out a noticeably distinct group-centric mode of operations.

Floating in a Spiral; Tripping So Fancy; On the Way; Dancing in Moonlight; Changeable Weather; Opera of Vaudeville; The Altar Boy and the Priest; Steady Flux (Dear X); Resplendent; Climbing the Tower11 Air Play; Oh How We Wonder Why; Not on a Wednesday; Velvey Wet; Grass Beneath Our Feet; Over and Under.