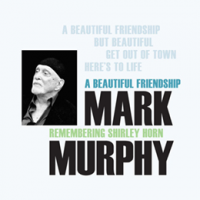 In his time, vocalist Mark Murphy has been described as hip, cool, swinging, fearless, gruff, and eccentric (among other things). Some— but most definitely not all—of these terms could also be applied to Shirley Horn. So it's fitting that Murphy should pay tribute to his compatriot, as he does on A Beautiful Friendship: Remembering Shirley Horn, even though Murphy acknowledges that the two vocal legends didn't know each other too well.

This four-track vinyl EP (accompanied by a download code) was first envisioned by pianist/arranger George Mesterhazy, who had worked with Horn and Murphy but died before the project was completed, so it was left to Murphy's manager, Jean-Pierre Leduc, and Gearbox Records' Darrel Sheinman to produce what became a tribute to Horn and Mesterhazy.

So what of Murphy in 2013—or more accurately, Murphy in November, 2012, when this disc was recorded at the Merrion Inn, Cape May, New Jersey? To paraphrase (very loosely) the lyrics of Jimmy Van Heusen and Johnny Burke's "But Beautiful": he's funny, sad, quiet, mad, cool, hip, lonely, dark, swinging and romantic—and all this in just four songs and 20 minutes.

Murphy's musical collaborators—pianist Alex Minasian, bassist Curtis Lundy and drummer Steve Williams (Horn's percussionist for 25 years)—are in sync with the singer's mood and phrasing on every song. Murphy the laidbaxk hipster is in evidence from the opening bar of "A Beautiful Friendship," his cool bop-inspired phrasing matched by Williams and Lundy. It's the end of a beautiful friendship, but the twist is, of course, that friendship is being replaced with love: Murphy relishes this, barely hiding his delight before the twist is revealed.

On "But Beautiful," Murphy's vocal is a perfect combination of cool and romance. He takes the song at a slow, considered pace, unhurried and relaxed, savoring each syllable. Guest trumpeter Till Bronner—an old collaborator of Murphy's who produced Love Is What Stays (Verve Music Group, 2007)—adds a crisp, economical solo that enhances the mood established by Murphy. This mood changes with Cole Porter's "Get Out Of Town." Murphy's tone becomes darker, almost threatening, as he shifts between declaring love, worrying about heartbreak, and issuing the order to leave: Williams' snare drum punctuation and Brönner's muted trumpet add to the menace until Brönner's solo temporarily breaks the tension with a few bars of swing.

Murphy closes with Artie Butler and Phylis Molinary's "Here's To Life," a duet with the excellent Minasian. It's a celebration of life, of "the dreamers and their dreams," but Murphy brings his 81 years of experience to the lyric and tempers the celebration with regret. He's not done yet, though—"As long as I'm still in the game I want to play," he sings. The result is extraordinarily affecting.

Four songs, four lessons in how to sing. Murphy shows how to craft a vocal and make every syllable sound like it was written about no-one else but him. A superb tribute, from a fine singer who's most assuredly still in the game.

A Beautiful Friendship; But Beautiful; Get Out Of Town; Here's To Life.