By ERNEST BARTELDES
December 26, 2005
Sign in to view read count 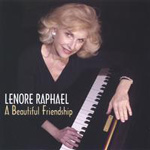 Don't be fooled by the track listing on A Beautiful Friendship, which is mostly made up of classic songs by the likes of Sammy Cahn and Cole Porter. Instead, be forewarned that this gifted pianist does not intend to take listeners through a journey of predictability. Rather, Lenore Raphael brings a new spin on songs that most thought could not be developed further.

For instance, on Porter's "I Love You, she begins with a mellow piano solo and is later joined by her bandmates, who follow her lead and take turns carrying the song, which stretches for more than nine minutes. Bassist Hilliard Greene and drummer Rudy Lawless lend "Alone Together a bossa nova subtlety that opens a lot of space for Raphael to exercise her chops by using large, sonorous chords and clever piano riffs throughout.

The leader does sound more comfortable with more up-tempo moments, as on "We'll Be Together Again and "Stella By Starlight, where she plays several solos, demonstrating amazing speed without descending into the overly technical.

On "Let It Go, the recording's sole original composition, a whole different approach is taken by introducing several percussive elements (tambourine, etc.) not present on other tracks. In the liner notes, Raphael relates that the song started life as "No Holds Barred, until lyricist Marcia Hillman wrote lyrics for it. For reasons untold, they are not included here—which would have made for an interesting close to the album—but it is still a great listening experience, taken by Raphael's trio to some unexpected places.

A Beautiful Friendship; I Love You; Alone Together; Like Someone In Love; We'll Be Together Again; Stella By Starlight; Darn That Dream; Jordu; Let It Go.