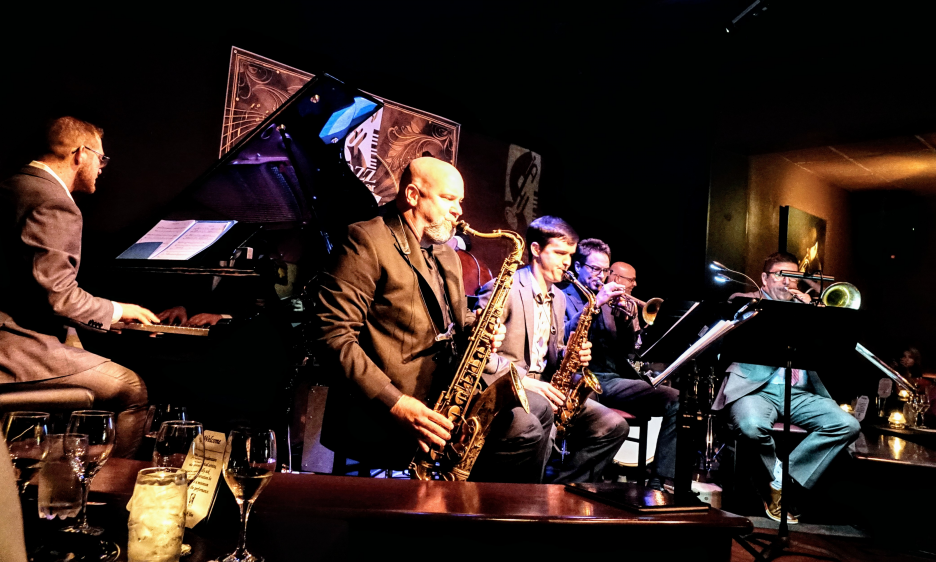 As a precursor to the two main pieces of music in this Sunday lunchtime program, the Justin Varnes Orchestra played the most famous waltz ever written, Johann Strauss' II "Blue Danube." The instantly recognized theme was so well-known it had kitsch value, the audience clapping along in time. There was that ironic, impish humor which Duke Ellington brought to his big band forays into classical music. It was fertile ground for swing and solo improvisations, particularly from the piano of Nick Rosen and the bass of Kevin Smith. Flute laid out the theme first, joined by all the horns as the waltz rhythm carried them bouncing along.

Maurice Ravel always held an interest in writing music to restyle the ballet. When Russian dancer Ida Rubinstein commissioned him, Ravel went through a series of options before arriving at Boléro. He said his "new theme had an insistent, compelling quality which he intended to repeat without development, increasing the intensity throughout one unbroken movement," from pianissimo towards a fortissimo crescendo. Boléro had its debut as a ballet in 1928 at the Garnier Opéra in Paris and was immediately a spectacular success. A year later, Arturo Toscanini conducted the New York Philharmonic debut also to great success, but Ravel later reminded Toscanini his tempo was too fast, leading to an acrimonious exchange. That only added renown to Boléro. Avant-garde ballet master Maurice Béjart produced the work in Lausanne, Switzerland, and toured it extensively. Boléro proved to be Ravel's most famous work, aided by the advent of radio.

This presentation at The Jazz Corner was another in the "Classical meets Jazz" series promoted by owner Mrs. Lois Masteller. The principles are to take classical music themes and blend in orchestral instruments and jazz rhythms. The series has already produced jazz versions of music by Tchaikovsky, Chopin, Gershwin, Grieg, Beethoven, Barber, and Vivaldi.

The Boléro theme is repetitive and has a distinctly syncopated jazz feel with flattened blue notes. Remember here that this music was written in the Roaring Twenties when jazz was everything and everywhere. The work of translating this classical piece into the jazz idiom was structural. The rhythmic changes were paramount, so once again in this series, the producers turned to percussionist Justin Varnes to lead his Atlanta based orchestra. The acoustically balanced Jazz Corner room supported the sound range with ease.

ADVERTISEMENT
Opening quietly, Varnes played the original snare drum introduction then moved to use mallets, followed by Luke Weathington stating an embellished swing version of the theme on clarinet. It was taken up by Mark Rapp on muted trumpet, to which Tim Pitchford replied, drawing baleful notes from the muted trombone. Next at the same theme was John Sandfort on tenor saxophone. Weathington returned, this time on flute with light accompaniment from Rosen on piano. The horns dropped the mutes, and Weathington took up his alto saxophone. The same theme continued, but the volume and intensity gradually increased. Finally, the piano was at full force. The horns were blaring the theme louder and louder. The music cascaded down to a sudden stop.

The zenith of the crescendo that is Boléro was a construct, a ramp up to launch the next piece of music. When Richard Wagner wrote "The Ring Cycle of Nibelungen," it comprised four full operas, the second of which was Valkyries. The thundering "Ride of the Valkyries" was extracted because of its exceptional power and drama, against the express wishes of Wagner himself, who saw his music as one whole. At its 1870 debut in Munich, the total Ring ran to 15 hours of music over three days.

In "Ride of the Valkyries," Brunnhilde and four warrior sisters waited on a windswept mountaintop for the return of magical flying horses from the battlefield. The sisters accompanied the souls of fallen warriors to hero—heaven in Valhalla, home of the gods. The story is from a Norse Saga. Outside The Ring, it is played as an orchestral work. The opening was an uncompromising attack, starting with a crash of cymbals and long trills from the horns before they went straight to the theme swinging hard. Tenor and alto saxophones, trombone, trumpet each took solos. Valkyries is an enormously powerful piece but only ran about nine minutes, so there was time for a piano solo with haunting trombone accompaniment driven along by fast drums.

Once again in this series, the musicians broke new ground, performing these pieces live for the first time. Their challenge and excitement came through in the music. Building the blasting power in an intimate room, thrilled the audience and exhausted the senses.