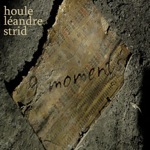 Three exceptional improvisers comfortable in the art of instant interaction join forces and unleash an exceptional aural treat on 9 Moments. They define nine moments which devolve over different trajectories and moods, making each sit up and draw the listener into its soul. They can be animated and soar in exultation, or dip into a soothing well-being. The spell is created by François Houle (clarinets), Joëlle Leandré (double bass) and Raymond Strid (percussion), on this recording of live and studio material. The setting is of little consequence though; the music has the same sweep and impact.

The opening "Moment Premier and the closing "Moment Grave are the signposts. The former is a quick distillation of their approach through scattered tonalities and linear emphasis, the latter a gently laid back ode. Between the two is a transcendence that captures sound and shapes it into several dimensions. Expectancy is belied by surprise, the ordinary by excellence.

The trio cuts right to the groove on "Moment Grave. Leandré bows an angular swath on the bass against the rumble of Strid's bass drum and then gets into full flight, her bow casting deeper hues and trenchant motifs, snuggling against the strings and then darting off. Linearity and the complementing lines of Houle and Leandré cool the tempo and bring in a cohesive flow, but the lull is short lived. Strid renders the mood asunder with a dazzling array of percussive sparks and Leandré takes it into another dimension, juxtaposing Indian vocal rhythms with Vocalese. Houle marks a constant presence. His notes howl, sidle into the vortex and cool the heat, or dance in glee to Leandré's song.

The interaction between the three is best captured on "Moment Tendu. The understanding between them is the cornerstone of the adventure. They read each other perfectly, see the path that is being drawn, and follow before moving into solo tangents. The mood shifts are constant as they go through tempest and calm, dissonance and melody, structure and freedom.

Moment Spatial leans back and breathes. The three leave plenty of space, nothing is hurried. The integration of the rhythm of the bass and percussion and the harmony of the clarinet sit comfortably, the reflective mood soothing and characterizing of yet another aspect of the trio's music.