By ROGER FARBEY
September 25, 2018
Sign in to view read count 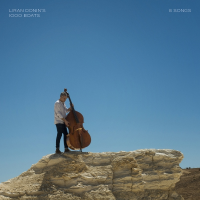 The virtuosic bass solo that opens "I Can See Tarifa" is the prelude to a dynamic ensemble vamp, unleashing torrents of unbridled saxophone . "The Story Of Annette And Maurice" is more reflective and utilises the twin horns in close harmony and Donin's pizzicato bass duetting with Maria Chiara Argirò's piano. The piece gradually picks-up momentum and volume resolving in a crescendo of sound before fading into a wistful piano outro.

"Tel Aviv To Ramallah" is suitably dramatic in conveying the impact these two diverse cities have had on Israeli-born Donin, with Led Bib altoist Chris Williams pulling no punches here, the whole piece wrapped in an engaging ensemble riff. The lyrical start to "Gal And Osh" is bridged by a bass solo before the song increases in tempo and exuberance, augmented by Donin's wordless vocals. The deceptively simple "New Beginnings" has a trance like quality with the strings of the piano initially hand-muffled to emulate a guitar, but as the piece develops the emphasis is placed on three dramatically repeated chords over which Ben Brown's explosive drums are pivotal. The concluding track, "Free," involves some of the most complex yet satisfying arrangements on the album with the ebullient horns jousting for attention and more wordless vocals racing towards the irrepressible finale.

The paradoxically titled 8 Songs (there are actually nine tracks here) is not merely an unashamed vehicle for Donin's melodic bass solos, which are ubiquitous throughout, but also showcases his compositional inventiveness, characterised by a chiaroscuro of serenity followed by dramatically increasing tension and subsequent release. Liran in Hebrew means, literally, "for me, he sings," and judging by this excellent debut, it's a self-fulfilling prophecy and a fairly accurate one too.