By DAN MCCLENAGHAN
April 20, 2009
Sign in to view read count 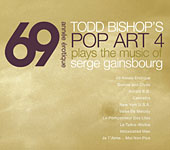 69 Annee Erotique gets extra credit for off-the-beaten-path-ness. It is a work celebrating the music of the late French pop songster Serge Gainsbourg (1928- 1991), by Portland Oregon-based Todd Bishop's Pop Art 4. Gainsbourg, whose name may not be person-on-the-street familiar in the United States, was a pop icon in France from the late-1950s to the 1980s, a musical renaissance man of sorts who delved into jazz, pop, reggae, soundtracks, psychedelia and electronica, all while nurturing a reputation for unseemliness and personal excess in the mode of California poet/writer Charles Bukowski, to whom he has been compared.

The sound that drummer/band leader Bishop has crafted is a curious mix of garage/surf rock and Phil Spector-like wall of sound production, with some gritty saxophone, a dash of Neil Young and Crazy Horse grunge, going with gusto after Gainsbourg's simple and engaging yet ofttimes Brian Wilson (of The Beach Boys) type of pop song melodies.

The title tune opens the set with a memorable saxophone-blown melody wrapped in some psychedelic keyboard swirls and echoing, and recorded-in-the-basement string washes. "Bonnie and Clyde" features the disc's woodwind master, Richard Cole, on bass clarinet and soprano sax—weaving low and high around each instrument's lines, in front of a trudging drum beat and sparkling keyboard rhythm. "Cannabis" has a light and loopy marching band feeling, with Cole out front blowing with straightforward muscularity, while "New York, U.S.A" is full of fast, forward bustle, underlain by a squeaky rhythmic squall that sounds like a nest of rutting rats.

"Valse de Melody" injects a spooky atmosphere into the set, like part of a soundtrack to a noir movie, followed by "Le Poinconneur des Lilas," with its saucy, jazzy and stripped-down sax-and-rhythm section approach.

Todd Bishop and his Pop Art 4 have come up with a peculiar yet distinctively compelling sound with 69 Annee Erotique, a strange and excellent musical experience.