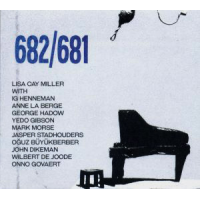 Canadian pianist Lisa Cay Miller has been playing her instrument since the age of four, later taking up flute as well. Her divergent intermingling of improvisation, avant-garde and classical music has been on display in two previous projects with the improvising cellist Peggy Lee. On her unique 682/681, abstract improvisation rules across twenty-two vignettes. The title is a reference to KLM flight numbers between Miller's Vancouver base and her frequent collaborations in the Netherlands.

Miller gathered ten Amsterdam colleagues for these duo and trio improvisations and the pieces (named for the participating musician) range from one minute to just over five minutes. The musicians are not likely familiar names, though violist Ig Henneman recently released Trandans (Wig, 2017) with multi-reedist Ab Baars and pianist Dave Burrell. Turkish clarinetist Oğuz Büyükberber has some solid jazz connections having worked with drummer Gerry Hemingway and pianist Simon Nabatov.

These nonfigurative improvisations are difficult to describe. Intelligent and sophisticated, they are for the most part, intense. Miller and each partner pile on layers of dialogue and given the brevity of most pieces, rarely with a lever to grasp for centering. A particular standout performances is "George," a duet with drummer George Hadow; here Miller works around the low end, providing some thunderous effects while the drummer works in cutting accents. "Ig," with Henneman, is a beautifully synergized piece where the viola and piano engage in a high-speed dialog, fade away and return with a touch of classicism. "Onno, Wilbert," one several trio performances features another drummer, Onno Govaert, along with Wilbert de Joode on contrabass. Miller's lightning quick piano stands out in a traditional trio setting and is both evocative pointed.

Miller's compositions have been performed on four continents and she has written for big bands, chamber ensembles and multi-media events, so 682/681 only provides the narrower scope of her avant-garde style. The pianist explores in ways that are occasionally delicate, sometimes obsidian, and in the to and fro there is a sense that she stops just short of the vanishing point. Her colleagues are more than complimentary components in these pieces as they are sometimes at odds with Miller but always on-topic as each improvisation plays out.