50 Years of Rolling Stone: The Music, Politics and People that Shaped Our Culture 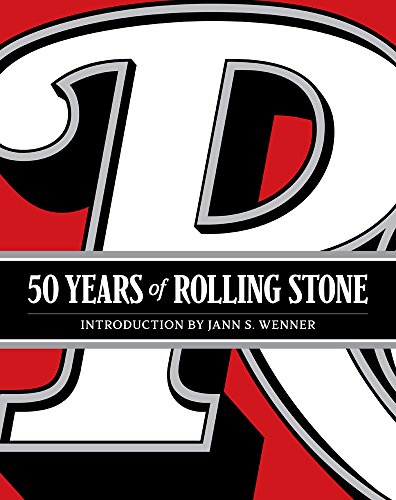 A coffee table book for a generation, this near seven-pound tome entitles 50 Years of Rolling Stone is as philosophically weighty as its subtitle would imply. Or so Jann Wenner would have us believe in his introduction and essentially he's right. Yet he hedges on the fact that, while Rolling Stone Magazine from day one had every intention of carving out a niche for itself with its alternative approach to The Music, Politics and People that Shaped Our Culture, his subliminal intention was to garner the approval of, if not equity with, the mainstream news outlets of its day.

Which is exactly what Rolling Stone accomplished, in fairly short order after it's founding. And it's a standing it's more or less maintained in the subsequent half-decade, except perhaps in the years immediately following the move of the editorial offices to New York city from its original headquarters in San Francisco. Wenner, who co-founded the magazine with late music critic and mentor Ralph J. Gleason, has gone on to become a media mogul in his own right, publishing US Weekly and Men's Journal,' in addition to helping establish the 'Rock and Roll Hall of Fame.'

Yet, sometimes contrary to public appearances, he's preserved a stance much more complex than the glib phrase taken from the original masthead, appearing, in decidedly tongue-in-cheek positioning on the very last page here : for Jann Wenner and his editors, writers and photographers, 'All the news that fits' means moving minds as well as selling magazines (or books for that matter).

As with the personal reflections of an individual, such chronicles as 50 Years of Rolling Stone constitute a challenge in self-awareness and honesty. Perhaps that challenge is less pertinent here because over the course of its half-century, under the publishing imprimatur wryly titled Straight Arrow has published more than a few standalone books, including collections of record reviews and interviews, other chronicles of its own history, not to mention specialty magazines devoted to single subjects such as the Who and it's arguable the designated focus of those items does more to clarify the changes in the magazine as much or more than a panorama like this. But this book works equally effectively in a different way in its appeal to those at opposite ends of the readership spectrum: the loyal long-time follower and the disinterested dilettante.

As such, this particular volume may have been doomed to some intrinsic superficiality by its very concept. And certainly over the course of its two-hundred eighty-eight pages, the level of self-awareness arising from the chronological unfolding of content rises and falls as it aims to court a readership for more than just nostalgia. Still, while it's debatable if this particular version of history is contrived, it's not dated. On the contrary, the end result of processing the publication's timeline within its 11' by 14' hardcovers confirms the resilience of those core traits that motivated its staff during the magazine's so- called heyday; it really is moot whether the individual reader comes away with (or brings) a borderline cynical impression about the magazine's chosen concentration(s) on an arbitrarily designated audience: the magazine may have not exactly flaunted any given stance, but it did not shy away from expounding same (and Wenner doesn't in his aforementioned intro either).

But that observation arises from the theory that 50 Years of Rolling Stone confirms that the publication's fundamental traits remain, if only in the most artfully nuanced terms. Certainly in the heyday of Hunter S. Thompson, it did not fit comfortably into the mainstream with its raw, insightful political coverage, nor does it now as spearheaded by Matt Taibbi as he carries on the legacy of the late doctor (or P.J. O'Rourke and William Greider, for that matter).

And that's not to mention a willingness to run counter to the counter-culture as much as confront the various forms taken by 'the establishment' over the years. Wenner and, by extension his staff, have relied on their overall intuition and their increasingly well-honed instincts to guide them in choosing whether to play it safe or cater to their most discerning audience. This book is a natural outgrowth of the confidence at the heart of striking that balance and, not so secondarily, a tribute to his leadership in that regard.

Balancing appeal to political savants and admirers of serious music as well as the proletarian tastes of mainstream population is a paradox Rolling Stone confronted directly by its emphasis on photography. Thus, it's not surprising there are far more pages of pix than prose here, even if this doesn't qualify as a photo book. But what might come across as a expedient is actually another understated gesture of the magazine's faith in its readers, a belief they can discern when their photographers—from Annie Lebovitz to Richard Avedon and beyond—play on, play off or play with the personae of their subjects: the attraction can be purely ephemeral (Lindsay Lohan) or timeless (Obama) and the fact both of those portraits receive two-page spreads is as telling a gesture as can be about the magazine's utterly (but not shamelessly) pragmatic approach as evidenced throughout its lifespan.

The galleries of covers for each of the decades in sequence may only scratch the surface of that art vs. commerce ethos, but those images accurately represent the more subtly creative shots capturing the essence of the subjects, whether the given portrait purports to reveal character (Bruce Springsteen), caricature (Lady Gaga) or a mixture of both (Bono). Just as this is not a book anyone might buy for themselves-it virtually screams 'GIFT!'-neither its borderline massive format nor its largely truncated features invite sustained and serious reading; casual perusal is more to the point and while it's possible few if any of those who pick up 50 Years of Rolling Stone will do so to absorb the essays or excerpts from interviews, fortunately that's not the only way to digest the meaning of what's inside (and some of it's not profound in any way shape or form anyway).

But to the great credit of Jann Wenner, editors Joe Levy and Jodi Peckman, not mention design director Joseph Hutchinson (whose black embossed cover is the crowning touch on a consistently eye-pleasing layout that could've been, like the current issues of the magazine, too busy for its own good), the book is ultimately a fair-minded take on what is now an avowed American institution. Those who might regard as tokenism the inclusion of content devoted to hip-hop, Kendrick Lamar and Tupac, will have to ignore the pages consumed by observations on punk, the Ramones and Green Day; these not-so-diametrically opposed genres have wield arguably commensurate influences on contemporary music and Rolling Stone's ongoing mission to not only educate but reflect its audience nurtured its growth over the years and not just in terms of advertising revenue.

In keeping with its subtitle though, this publication might best function as a jumping off point for more deeply involved explorations of the artists and the art it references, as well as the socially relevant topics it continues to cover, such as "Fast Food Nation." Still, it's impossible not to take note of the extent to which The Music, Politics and People that Shaped Our Culture gives proportionate attention to figures as seemingly disparate as author Tom Wolfe and Nobel Laureate Bob Dylan (after whose most famous song the publication was named, along with the band of the same name and the Muddy Waters song). It's to Wenner's credit that he points out how his staff, including at various times Jon Landau (now manager of 'The Boss') and filmmaker Cameron Crowe, reflected that eclectic taste.

The great irony in all this, of course, is that, if 50 Years of Rolling Stone is successful as the point of departure described above, it may entice new followers go on-line, rather than buy current issues of the magazine (or rummage around used book stores, eBay or flea markets for dog-eared copies of it in the original newsprint format). It's safe to say Jann Wenner and company would be happy, so long as the dialogue continues in some way shape or form, whether in the now perpetually thin, glossy likes of the bi-weekly magazine, via cellphone and tablet or as vividly contained herein .