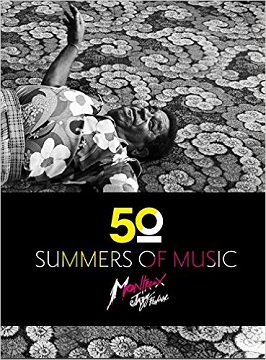 It's neither the oldest nor the largest, but Montreux Jazz Festival is, arguably, the most famous music festival in the word. It's a notable and perhaps unlikely badge of honor for Montreux, described by Deep Purple in the early 1970s as "a sleepy little town full of old ladies and tea rooms."

To celebrate MJF's 50th edition, which was held over seventeen days in July 2016, the MJF has produced this handsome pictorial history, with illuminating mini-essays from an impressive cross-section of the musicians who have graced the MJF stages since its inception in 1967.

Even a casual perusal of the book's near-400 pages suggests that the MJF owes its fame to four principal factors: firstly, the quality and diversity of the music; secondly, the hundreds of live recordings from the MJF's unrivalled audio-visual archive that have been released since the late 1960s; thirdly, the hospitality accorded the musicians; finally, the late Claude Nobs, one of the MJF's original founders, and for forty seven years, a tireless ambassador for the festival and the tiny Swiss town of Montreux.

There's also the beauty of the festival's location, in itself a major draw for musicians and music lovers alike. Nestled on the shoreline of Lake Geneva, with vine-clad hills at its shoulder and Alpine mountains facing it across the water, Montreux is little short of idyllic. Danny Ginoux's double-page portrait of Ray Bryant and Randy Weston, silhouetted against the shimmering lake and rugged mountains, and another of David Bowie skiing, capture the majesty of Montreux's setting.

Then there's that song. Deep Purple's "Smoke On The Water," which testifies to the fire that destroyed the Montreux Casino in 1971, has immortalised both the festival and "funky Claude." Alain Bettex's stark black and white photograph of Swiss bassist Léon Francioli—who passed away a few months before MJF 2016—standing in the rubble of the Casino's burnt-out shell, lugging his instrument, is a reminder that the MJF has overcome significant hurdles throughout its history, regrouping each time and carrying on with a mixture of on-the-fly improvisation and inspired planning.

In author Arnaud Robert's eloquently penned introduction, he describes MJF as ..."a tiny drunken boat that steers by relationships, sympathy and contacts." Nobs, from the off, made all the right contacts, notably Ahmet Ertegun, co- founder of Atlantic records, who sent all the Atlantic artists to Montreux, from Aretha Franklin to Led Zeppelin. In this respect, MJF paved the way for the growing inclusivity of many of the world's greatest jazz festivals. As James Blake observes: "Claude Nobs was one of the first people to understand that if jazz was to survive it had to open its borders."

In one of the book's sixty interviews—which range in style from elegant essay to intimate confessional—Ertegun describes Nobs' talent for getting his way: "He was incredibly good at appreciating musicians. He had a genius for seducing artists he wanted. He managed to sweet talk Aretha Franklin with a fee of 500 dollars and, above all, a box of chocolates. That's quite something." Nob's can-do attitude is neatly summed up by Angelique Kidjo, who appreciated Nob's refusal to pigeon hole her: "Where other people saw ravines he saw bridges."

Black and white photographs of Franklin, Ella Fitzgerald, Roberta Flack, Jack DeJohnette, Dizzy Gillespie, Marion Williams, T-Bone Walker with Chuck Berry, Peter Tosh, Nat and Julian 'Cannonball Adderley, James Brown doing the splits, Stevie Wonder, Ray Charles and John Lee Hooker—amongst others—count as some of the most iconic images of these musicians ever recorded. Danny Gignoux's poignant picture of Charles Lloyd with Michel Petrucciani in his arms at the end of their 1982 performance is especially emotive.

Color photographs that stand out include ones of an angelic looking Prince and a haggard yet intensely focused Miles Davis. Other shots that would grace any gallery wall include Kraftwork, Sarah Vaughan, Etta James, and a spectacular image of Dr. John in flamboyant Mardi Gras Indian plumage.

Some of the most effective photographs, however, are those that frame the musicians in moments of off-stage relaxation: Leonard Cohen standing on his head; Dizzy Gillespie and Zoot Sims playing poker; Ahmet Ertegun and Claude Nobs basking in the sun-kissed lake, a party at one of Nob's chateaus -all attest to MJF's famously chilled-out yet festive ambiance.

Many of the twenty or so photographers whose pictures feature have had long-standing relations with MJF, none more so than Georges Braunshweig -a regular at MJF since 1970. His 1975 picture of Norman Granz handing Oscar Peterson and Roy Eldridge their fees, in cash, in a large money-bag at a garden party, is a lovely illustration of bygone ways and bygone days. Equally evocative of yesteryear is Giuseppe Pino's photograph—also from 1975—of the festival team's logistical blackboard—a veritable museum piece from today's computerized vantage point.

Perhaps the book's greatest strength is the narrative of MJF's evolution that runs through photographs and texts alike. The changing musical fashions—from bebop to hip-hop and from blues to electronica and pop—are well documented. Also chronicled are the MJF's technological strides, which include being one of the very first festival's with an online-presence; in 1994 the MJF sold 150 tickets online. John and Helen Meyer, who have provided MJF's sound system for thirty years, describe sharing with Nobs ..."a sometimes irrational obsession with quality."

Colourfully anecdotal, the texts offer up numerous fascinating stories from MJF's fifty years, which are as revealing of the musician's sacrifices, doubts and inhibitions as they are of their ambitions, inspirations and passions.

Clearly, MJF means a lot to the musicians who have played there; above all, perhaps, MJF seems to have afforded musicians a sense of musical liberation. "If you want to understand my career," advices George Benson, "listen to my shows at Montreux." French journalist Yves Bigot remarks: "The festival made it feel like the music we lived for was really important."

The essays/interviews are not all by musicians, reflecting the numerous personalities that are part of the MJF tapestry: festival producer George Wein; long-standing Nobs collaborator Jaquelyne Ledent-Vilain; graphic designer Pierre Keller; journalist/producer Nancy Ypsilantis; world-renowned chef Fredy Girardet, and Thierry Amsallem -Nobs' life-partner and collaborator. Taken together, their testimonies throw light on the nuts and bolts of MJF, help paint a vibrant collage of Nobs—his personality and driving forces—and ultimately, shed light on the abiding spirit of MJF.

The final forty pages are a photo album of the eclectic ephemera collected by Nobs over close to five decades. From a toy train, a contract with Miles Davis and a harmonica, to posters, LPs, a recipe book and ceramics, the images offer the outsider an insight into Nob's personality and will no doubt stir a thousand and one memories for those who knew him well.

A beautifully designed and presented coffee-table book that draws you back again and again, 50 Summers of Music is a wonderful souvenir for any music fan who has ever experienced MJF—or who dreams of doing so—and an important historical document of a festival that celebrates music without borders.