By EYAL HAREUVENI
September 13, 2014
Sign in to view read count 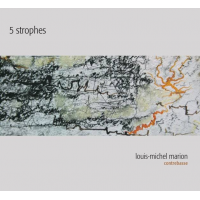 French double bassist Louis-Michel Marion's sophomore solo double bass album (after his debut solo double bass album Grounds, Emil, 2012) blends influences from European schools of free improvisation and experimental, modern composers. Marion—who collaborates regularly with forward-thinking French improvisers like sax player Daunik Lazro, clarinetist Xavier Charles or pianist Sophie Agnel—describes himself as influenced by seminal, innovative double bass players such as Joëlle Léandre, Barry Guy and Peter Kowald and composers such as Giacinto Scelsi, Iancu Dumitrescu and Iannis Xenakis.
>br> Marion frames the five improvisations with a quote by thinker Henry David Thoreau who wrote in his journal that "unpremeditated music is the true gauge which measures the current of our thought;" a quote by composer Malcolm Goldstein emphasizes his search for "finding new and subtle twists and turns as things move." And, indeed, the free improvisations search patiently and methodically for the deep, not only in its tones, and subtle sonic characteristics of the double bass.

"Askings" focuses on delicate sub-harmonics reached with a wise usage of the bow and its precise contact with the strings and the pressure put on the strings. On "First Steps" he creates a profound, meditative drone by focusing on short, repetitive lines that in their turn form a series of resonating, overtones that amplify the meditative spirit of this piece. "Who Talks" stresses the deep-toned, wide, resonant timbral range of the double bass in all its splendor and dark beauty. "The Deep Motion" is another drone piece, deeper and slower than "First Steps" but with similar intense, hypnotic power. Its captivating, emotional effect sounds timeless as if overcoming boundaries of time and space. "Deserts of Vast Eternity" suggests a spare, lighter atmosphere. Marion sketches a mysterious and abstract texture with light, surprising touches of the bow on the strings, employing silence as an integral part of his sonic palette.