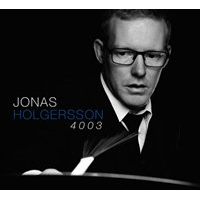 Four young Swedish musicians and one expat Englishman attempt to reverently recreate hard bop from the 1950s and '60s. The title, 4003, was the catalogue number for Art Blakey's Moanin' (Blue Note, 1958). The album features 12 numbers, most of them considered classics, by the likes of saxophonists Hank Mobley and Clifford Jordan, guitarist Grant Green, trumpeters Blue Mitchell and Kenny Dorham, and pianist Herbie Hancock—plus, curiously, pianist Duke Ellington's "Sonnet for Caesar," from Such Sweet Thunder (Columbia, 1957) and pianist Keith Jarrett's "Prism," from Changes (ECM, 1983).

The problem becomes apparent from the opening track, "Deciphering The Message," from Blakey's Live At The Café Bohemia (Blue Note, 1955). In addition to Blakey (drums), that recording featured Mobley, Dorham, pianist Horace Silver and bassist Doug Watkins. Holgersson and his men eschew risk; the gap between their enthusiastic efforts and the real thing is enormous.

It's the same with Blue Mitchell's title track to the trumpeter's The Thing To Do (Blue Note, 1964) and Green's "Idle Moments," recorded for the same label the year before. Not to mention Mobley's "My Groove, Your Move," "Infra Rae" and "Roll Call" or Dorham's "Una Mas." Of course, it's nice to hear such iconic songs given a new reading, but something—a great deal actually—is always missing.

Holgersson is relatively unknown, even in Sweden. He hails from Furulund, a small town in Skåne, the country's southernmost province. His compatriots on this session are equally untried and even the presence of accomplished English trumpeter Gerard Presencer, who now lives in Copenhagen, fails to lift the proceedings. They remain one-dimensional, haunted by the ghosts of yesteryear.

The whole exercise is reminiscent of the traditional approach to jazz in which young enthusiasts tried to recreate the sounds of New Orleans at the turn of the previous century—though this was more valid, perhaps, because there were no means to capture those sounds at the time.

Jazz shouldn't be static. Nostalgia is a thing of the past and all that. But, after a few glasses of aquavit on a cold winter's night in Skåne, it might be pleasant to relax in a local jazz club and pretend to be in Café Bohemia or listening in at Rudy Van Gelder's studio in Eaglewood Cliffs, New Jersey, to those Blue Note sounds being created. With its vaulted ceiling made of laminated Douglas fir arches, they say it has a decidedly Scandinavian feel.