Arturo O'Farrill: 40 Acres And A Burro

By EDWARD BLANCO
February 28, 2011
Sign in to view read count 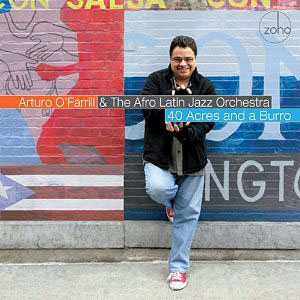 Founded in 2002 by Artistic Director Arturo O'Farrill, The Afro-Latin Jazz Orchestra of New York's Lincoln Center was created to perform compositions from Latin music masters including the pianist's father Chico O'Farrill, as well as Machito Tito Puente, Antonio Carlos Jobim, and others. The group separated from Lincoln Center on 2007, becoming part of the new Afro-Latin Jazz Alliance (ALJA), a non-profit organization dedicated to developing a new audience and educational opportunities for young performers. 40 Acres And A Burro, refers to the Civil War-era practice of providing farmland to Black slaves, newly freed from the chains of the Confederacy. For O'Farrill, the album refers to the freedom the group now has, as the resident big band at the Symphony Space, on the Upper East side of Manhattan, no longer constrained by the limitations of its previous host.

The group's philosophy looks at Latin and jazz music as one and the same—and, in a sense, does not consider Latin jazz as a separate genre but, rather, music that shares the same DNA building blocks of swing, blues and improvisation. Nevertheless, Latin swing is certainly a part of 40 Acres And A Burro, with Afro-Cuban rhythms playing a major role in the music's texture. The percussive swing and gyrations begin immediately on the opening "Rumba Urbana," with heated solos from alto saxophonist Bobby Porcelli, trombonist Gary Valente, and long-time O'Farrill band mate, trumpeter Jim Seeley.

There's a lot more swing on "A Wise Latina," O'Farrill's tribute to Supreme Court Judge Sonia Sotomayor, and more of the same with a lively salsa beat kicking in on the Chico O'Farrill arrangement of "Almendra." The great Paquito D'Rivera appears as a guest, contributing clarinet to "Um A Zero," a choro-styled Brazilian number from composer Pixinguinha. A descendant of Irish stock, O'Farrill pays tribute to his heritage by including a Celtic composition from David Bixler, featuring the saxophonist's wife, Heather Martin Bixler, on violin, and accompanied by a delicious tenor solo from Peter Brainin. In recognition of O'Farrill's Cuban heritage, he includes the tribute, "Ruminaciones Sobre Cuba," actually penned while visiting the island.

Rounding out the repertoire are Astor Piazzolla's "Tanguango," Hermeto Pascoal's "Bebe," and an absolutely dazzling big band arrangement of Dizzy Gillespie classic "A Night In Tunisia." Despite the dictates of the group's new philosophy on Latin and jazz music, 40 Acres And A Burro is nothing less than a sizzling and pulsating big band project. A failure at any attempt to erase the boundaries between Latin and straight jazz music, perhaps; but an unquestioned success as an articulate Latin jazz big band album.

Rumba Urbana; A Wise Latina; Almendra; Um A Zero; El Sur; She Moves Through The Fair; Ruminaciones Sobre Cuba; Tanguango; Bebê; A Night In Tunisia; 40 Acres And A Burro.