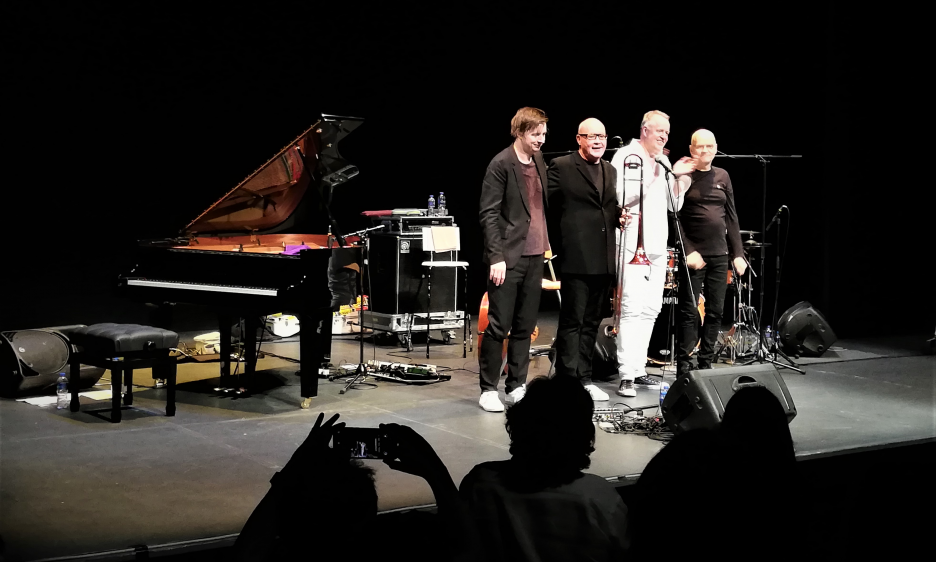 When exactly did jazz artists covering pop music shift from being a cheap and/or twee—but near-universally frowned-upon—novelty, to an almost obligatory rite of passage?

Some will point to the pioneering piano deconstructions of Radiohead, The Beatles, et al by Brad Mehldau, others the more recent hip-hop collabs and Robert Glasper Experiments—more may reach further back to Herbie Hancock's really quite prescient The New Standard (Verve, 1996).

In any case, it no longer feels all that noteworthy that a supergroup of four European jazz nobles might gather for the modest goal of reassembling lightweight chart fare in their image, although the decidedly uncool selections collected for 4 Wheel Drive's eponymous debut—largely '80s cheese by Sting, Billy Joel and Phil Collins—might appear especially construed to furrow brows.

Or maybe this material just suited the raspy, controlled cords of vocalist/trombonist Nils Landgren, who sings more than he blows on the group's eponymous debut, 4 Wheel Drive (ACT Music, 2019), and who serves as nominal leader alongside fellow Swede Lars Danielsson on bass, and two Germans, drummer Wolfgang Haffner and pianist/junior partner Michael Wollny: Four names often glimpsed next to one another, but never all at once, it seems—and certainly never quite like this.

The latest visitors via Hong Kong's wonderful Jazz World Live Series (which in the past month alone has already brought us Kamasi Washington and Marcus Miller), 4WD's opener—a pin-drop lounge-flavoured take on Joel's "She's Always A Woman"—felt like a delicate but worrying exercise of restraint, Wollny mining deep into the skeletal chart to uncover harmonies it seemed were always there, over Haffner's tumbling mallet rolls.

Built around Danielsson's nod-wink wandering bass, The Beatles' "Lady Madonna" was recast as a playful cartoon jig on wax, but this live take swiftly built into a cresting tumult—Wollny stabbing frantically at the keys to summon the first of several ecstatic harmonic meltdowns, conjuring something elemental from Lennon/McCartney's whim.

Landgren stripped any ambiguity from Collins' "Another Day in Paradise," his throaty reflection probing the inherent moodiness of the lyric—an observational lament left suspended over Danielsson's mournfully droning pedal point, which makes it clear we're living anywhere but. More effecting still is The Police's "Shadows in the Rain," introduced by a round of icy, bowed-bass soundscaping before several minutes of enthralling, unaccompanied piano—moving from an elegant pitter-patter to a torrential head-banging, key-whacking, limb-spasming storm of sound which made it clear Wollny can stand tall against any of the great solo keys improvisors—yes Keith Jarrett included.

Such explosive episodes make one wonder if this group has already grown restless with the restrictive material they chose (or likely Landgren did—although he denied so in the signing session afterwards). Exhibit A: The four token originals which padded out just a third of the album's runtime here become the main event.

Danielsson's "4WD" is a gripping, grungey, staccato stomper which, after breaking down to an arena-style clap-a-thon, bursted into an outro plod which appeared to deliberately recall Nirvana's "Smells Like Teen Spirit" (incidentally, a beguiling progression previously mined by Mehldau, Glasper, The Bad Plus , and every garage guitarist with a distortion pedal).

Playfully introduced by drumming on his own body parts with toy percussion pieces, and dedicated grandiosely to his six-year-old self, Haffner's "Lobito" unfolded into a delightful summery groove with a trace of Afropop; the counterpoint to Landgren's mournful, rainy day lament, "Le Chat sur Toit."

The set closed where the album begins, with Wollny's "Polygon," another furious stomper, this time in 7/4 and penned two decades earlier in a fit of dental angst—broken here by a spellbindingly unaccompanied bass solo, Danielsson unravelling chiming chords and rumbling arpeggios that you might expect from a flamenco guitarist.

Wollny gota sole second tune, a ballad introduced as "Silent Night," fleetingly sketched as an encore tease before Haffner struck a big four-to-the-floor beat to introduce the true finale: a foot-tapping, dad-rock trounce through Sting's "If You Love Somebody Set Them Free" which offered Landgren a platform for his most joyously hackneyed projections—with horn and without.

Before sitting down to the show I wondered out loud why these four players—and especially Wollny who, two decades younger than both Swedes, and midway through a widely-feted solo career on an ever-upwards trajectory—would take time out to play such flimsy material. But the answer was etched onto their faces all night, unfashionably wide grins betraying how much fun the entire quartet was having together. And with musicianship this high, these guys could turn nursery rhymes into art song.

A live record has already been bottled and will be released on October 25—hopefully it captures half the energy witnessed here in Hong Kong.