By PHILLIP WOOLEVER
March 29, 2019
Sign in to view read count 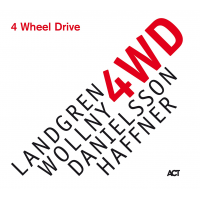 Sometimes it's not so much who's doing the playing as how well they play together. Just as some bands seem to perform beyond their individual skill sets, there have been heavily heralded, much hyped "super groups" that amounted to almost nothing of substance.

In the case of 4 Wheel Drive, a quartet consisting of established headliners from the German jazz-based ACT label, both the components and the product have resulted in an excellent album that not only qualifies as true jazz but also carries abundant mainstream appeal. That is a relatively predictable outcome since most of the record is comprised of familiar songs, from four musical star sources, that were huge international hits. Considering the musicians' pedigree and their selections, this is a pretty safe bet.

Still, while that formula might seem like a no-brainer, there's always an inherent danger of falling short of such well-known, established standards. Considering the level of material chosen, it was probably quite a challenge to achieve versions near the previous heights.

Most of the new adaptations work well, though not always. Listeners with a deep attachment to current classics could find issues since some takes are quite different from the original. That is no real fault since reinterpretation is the point here, and the band comes through fine on that count.

The disc opens with "Polygon," an original by pianist Michael Wollny. Lars Danielsson's pleasantly throbbing bass tones immediately confirm the album's fine studio specs and the song picks up speed as the rest of the quartet kicks in, while drummer Wolfgang Haffner's light touch on cymbals and rims carries a force of its own. The covers begin with Phil Collins' "Another Day in Paradise," one of the record's strongest takes. Trombonist Nils Landgren's vocals fit extremely well with the sublimely subtle touch of each player.

Positive momentum continues with an off-speed, instrumental slant on The Beatles' "Lady Madonna," with crisp dynamics between Wollny's keys and Landgren's horn, which sings on its own. Sting's "Shadows in the Rain" comes in a slower, bluesy version and Billy Joel's "Just the Way You Are" follows suit.

The same cannot be said for Joel's "Always a Woman." Landgren's whispery vocals usually fit well with the band's revisions but not so much in this case as the track drags on and on like an uptown girl's revenge. A dreamy "Maybe I'm Amazed" contains undeniable extra syrup compared to what Paul McCartney cooked up, but it's still tasty enough.

Haffner's "Lobito" is another masterfully-played, upbeat original that balances well with Landgren's "Le Chat Sur Toit," a two-part mini-suite that starts as a ballad and pumps up into a modern jazz jam before winding back down.

Sting's "If You Love Somebody Set Them Free" races towards the finish line and mirrors the song's original timing, transferred seamlessly from a pop to a jazz aesthetic. One can assume this rollicking remake will close the show if the quartet performs in concert.

A nicely warped version of the Genesis song "That's All" combines surprising sound and fury in a deceptively subtle package, and is one of the strongest reinterpretations.

Danielsson's compositional contribution, "4WD," provides an excellent coda to the record and adds similar themes from the project's opening track. If the intention was to create something that could fit an ongoing loop, that goal was achieved. The album definitely holds up to repeated play.

The primary question of any review is whether the recording is worth adding to a listener's collection. In the case of this dynamic quartet, that answer is: 4 sure.

Polygon; Another Day in Paradise; Lady Madonna; Shadows in the Rain; Lobito; Maybe I'm Amazed; She's Always a Woman; Le chat sur toit; Just the Way You Are; If You Love Somebody Set Them Free; That's All; 4WD.