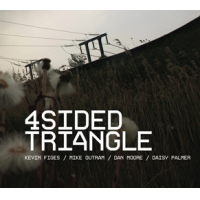 4 Sided Triangle offer up a set of tunes that mix jazz, rock, blues and funk on their eponymous debut album. It's an often-quirky set of tunes from an impressive quartet of British musicians led by Bristol-based saxophonist and composer Kevin Figes.

Figes also leads the Kevin Figes Quartet, which has released two albums, but 4 Sided Triangle is a different beast altogether: only Figes himself is present in both bands. Two things give 4 Sided Triangle a distinctive sound—Figes' baritone sax and the distinctly rock-oriented approaches of his band mates.

Guitarist Mike Outram shares lead roles with Figes, crafting some powerful, hard-edged solos. Keyboard player Dan Moore regularly plays with Bristol musicians from different genres, including saxophonist Andy Sheppard, drum and bass DJ and producer Roni Size, and with veteran funksters like Fred Wesley. He has relatively few frontline opportunities, staying mostly in the role of rhythm section partner with drummer Daisy Palmer, who has played with Goldfrapp and Get The Blessing. It's an effective partnership; Palmer in particular, matches Outram's rockier moments, while Moore has a great feel for concise and telling phrases.

The band impresses on the tougher, more up-tempo numbers. "The Bear" is a big, fat bluesy number centered on Figes' baritone sax. Figes' sound is at its richest and coziest here, readily conjuring up rather friendly ursine images. Outram's guitar solo, by contrast, paints a tougher, more threatening picture of the animal. The lengthy "Evel Minx" is characterized by a rougher edge to Figes' baritone, giving the tune a darker mood than most of the tracks.

There are quieter moments as well. "Still" is a gentle tune, featuring Figes' alto and Outram's guitar playing is at its prettiest and most restrained. "Reflection" finds all of the quartet's members in a restrained mood but always seems close to breaking out with some hard-core riffage. "The Grind" is another fairly relaxed number, despite the title. There's a distinct jam session vibe as the players solo in turn over Palmer's slinky groove. There is an unusual choice of cover in Badfinger's "Name Of The Game." Composed by Badfinger singer and pianist Peter Ham, it's pretty but not especially memorable, despite the sing-along vibe of its chorus and Figes' throaty baritone.

4 Sided Triangle doesn't fit neatly into any single genre. On balance, its music is more rock than jazz, even though Figes' baritone provides the band with its most distinctive voice. Is this a problem? Commercially, perhaps: radio programmers, among others, still like a neatly definable group. Musically, of course not: transcending boundaries is what a lot of good music does, so more power to 4 Sided Triangle.