By KARL ACKERMANN
October 17, 2019
Sign in to view read count 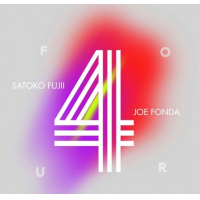 When pianist Satoko Fujii and bassist Joe Fonda first teamed up on Duet (Long Song Records, 2016), neither was familiar with the work of the other. Three short years later, "other" no longer applies, as the instantaneous rapport Fujii and Fonda found has led to a growing portfolio of cutting-edge music. 4 is the latest entry from these exceptional innovators.

The prolific Fujii has released more than eighty albums, including a dozen in 2018, in recognition of her sixtieth birthday. She leads numerous groups and three orchestras, and has recorded with Myra Melford, violinist Carla Kihlstedt, bassist Mark Dresser and drummer Jim Black. Fonda has worked with Anthony Braxton, Wadada Leo Smith, Archie Shepp, Barry Altschul, Jon Irabagon and many other top artists in multiple genres. He has released more than a dozen albums as a leader or co-leader.

Fonda's deep, woody bass ushers in "Painted By Moonlight," a melodic, deliberate piece. Fujii and Fonda move seamlessly from lyricism to complex avant-garde with the brief "Diamonds in The Rough," then shift completely to the classically inspired "Cannot Do More," Fonda's bowed bass adding a profound sense of melancholy. The centerpiece of 4 is the twenty-two-minute "Stars in Complete Darkness." A marathon of shifting ideas, it introduces guest trumpeter Natsuki Tamura who takes the elegant opening theme, briefly joining in before descending into his trademark assortment of noisy effects. The trio allows the piece to drop into silence, brought back to life by Fonda, now on flute. What follows is a patient, dramatic build-up, another wave of near-silence, and a stunningly rhapsodic close with Fonda again on arco bass. Tamura remains on board for the closing "We Meet As Three," a lengthy experimental tone and noise piece.

4, like each of the Fujii-Fonda albums, is unswervingly gripping, full of striking surprises and an endless array of colors. There is no standard fare here. The duo does not have a characteristic sound; they discard doctrine, and embrace an open philosophy of mixing jazz conventions and free improvisation around minimal structures. It is adventurous music from far outside the box.

Painted By Moonlight; Diamonds in The Rough; Cannot Do More; Gift From Billy; The Wind As It Bends; Stars in Complete Darkness; We Meet As Three.