By GENO THACKARA
March 9, 2019
Sign in to view read count 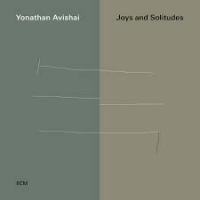 Though Yonathan Avishai isn't exactly in solitude on his debut as leader, half the recording is well suited to quiet times away from the world, or perhaps being enjoyed with minimal company—the trio at hand is comfortable with silence as any ECM ensemble should be. To suit its title, Joys and Solitudes alternates those contemplative spots with inviting pieces of timeless soft bop. It's a potentially conflicting mix on paper, but the results here make those halves seem like the most content of partners. On the first recording under his own name, Avishai's rich history (from his Third World Love and Modern Times bands to ongoing work in the Avishai Cohen Quartet) provides a spectrum of colors to shade the recording.

The worldly pianist has a natural feel for minor noir and classy meditation, but there's a persistent streak of soul that lingers even in the moodier moments. The loping "Song for Anny" is almost mischievous with a smile, before "Tango" brings the pace to a trot and Donald Kontomanou's clatters simulate lively footsteps along the sidewalk. When "Joy" simmers, it does so with lovely understated romanticism; the playful classical-tinged portrait of "Lya" makes the charming highlight of the affair at its most rosy peak. This is a beauty, a warm-hearted listen that shows inviting promise at first and fulfills it admirably with further visits. 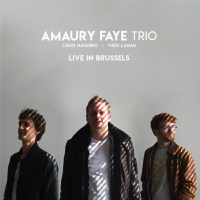 Amaury Faye honors a long tradition of ivory-ticklers from Bill Evans to Fred Hersch with a combination of restlessness and respect: the moods and modes are familiar, though those influences are really just a launching point for a sound noticeably more modern. This band takes their greatest cues from those forbears when it comes to playfully unpredictable interplay, and their classy European sensibility still doesn't stop things from reaching an occasional boil.

Faye sounds misleadingly easygoing as Live in Brussels kicks off, holding a patient pattern as his trio-mates shade the trance with non-static vamps. By the time they've gently swung through a surprisingly harmonic Thelonious Monk piece and followed with the aptly-titled "Fascinating Rhythms," the leader's right hand takes over with some nimble capering at too-much-caffeine speed. The jitters soon infect the others until everyone's hopping like mad—and yet sure enough, at the next turn, they're downshifting to a smooth romantic ballad for a mid-set interlude.

Louis Navarro and Théo Lanau are happy to join in the rhythmic games, bouncing through bouts of skewed harmonies and helping build each piece with a keenly deliberate ear for structure. Most impressive is "The Old Escalator," which almost chugs to a halt like the sound of a rusty machine itself before they get everything back into smooth working order. This release is only the start of a cycle, projected to be followed by several other live recordings in other European capitals. It'll be a fascinating pleasure to see how the group is shaped by each place as they go. 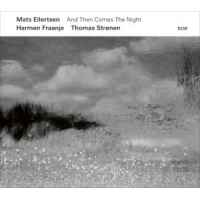 Mats Eilertsen
And Then Comes the Night
ECM Records
2019

The vibe is also a European one for Mats Eilertsen on his second ECM release, though this one leans more toward a quiet-hours trip through the countryside. Reducing the lineup to a trio after the septet featured on Rubicon (ECM, 2016), he likewise slims the song forms to make a series of impressionistic musings. These aren't the kind of pieces that follow familiar or recognizable charts. Instead the trio spends this session evoking moods in the abstract.

Those moods lean toward the melancholy, most strikingly with two variations on the mournful "22" that bookend the affair. Emergent behavior seems to be the guiding principle for what happens in between. The pieces were only loosely sketched to begin with, and the trio's light strokes are just enough to make the empty space speak most eloquently as they drift.

Eilertsen's bass is like a breeze barely making ripples in the water. Backed by rhythmic colorings just as restrained, it leaves Harmen Fraanje's piano to take the lead with the gentlest washes and ebbs. At their loosest, the three almost let the likes of "The Void" or "Albatross" dissolve into empty air. Other spots let hints poke through, such as the barely-there hopefulness of the leader's subtle arco on "After the Rain" (not the John Coltrane piece). Eilertsen and company are willing to follow as nature takes its course, and the trip makes a work of unpredictable and often arresting beauty.

And Then Comes the Night