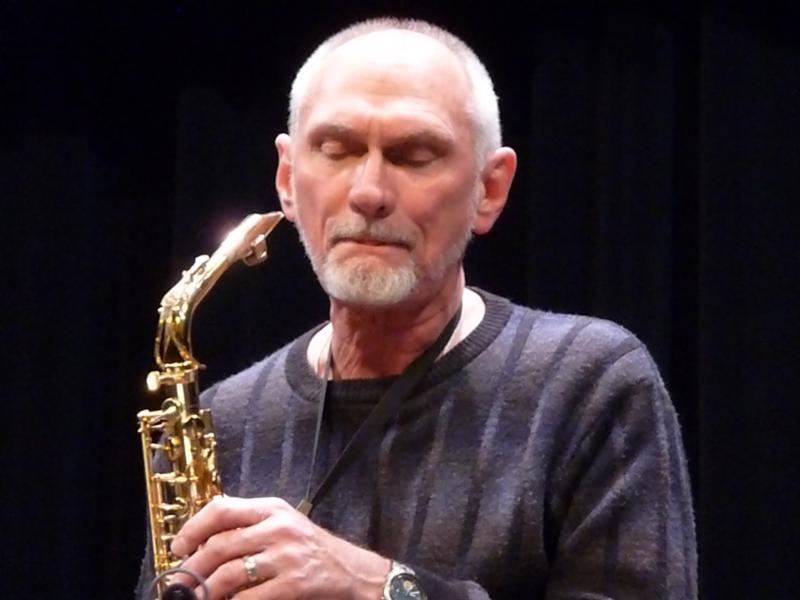 By MATT MARSHALL
March 9, 2011
Sign in to view read count
39th Annual Lakeland Jazz Festival
Kirtland, OH
February 24-27, 2011
The Lakeland Jazz Festival routinely catches the ire of Mother Nature, with winter storms often hampering travel of artists and fans alike, at times limiting attendance or even necessitating the cancellation of a show here or there. But that's life for a February festival in the heart of Northeast Ohio's snowbelt. Yet Lakeland's festival, now in its 39th year, soldiers proudly on. Its organizers even opted for an all-out effrontery to Old Man Winter this year by adding a third day of performance—a Sunday matinee—to its regular program of Friday and Saturday night headliners and roughly 15 hours of performance by junior high, high school and college musicians over the course of the weekend.

Friday night boasted a strong double bill of two of Northeast Ohio's more forward-looking jazz acts. First up was Organ Ism, a tight, energetic organ trio formed in 2007 that features saxophonist Howie Smith, organist David Thomas and drummer Bill Ransom. The group opened with a haunting, spatial take on Gershwin's "Summertime," cemented at opening and close by a slightly eerie, Ellingtonian coupling of Smith's soprano and Thomas' Hammond B3 on the melody. Thomas took the first solo, fracturing what up to that point had been a majestically orchestrated piece. From jagged steps he built a mosaic of sound—an arc he often follows on piano, as well—the cacophony expanded here by the Hammond's Doppler warble, as Thomas set the woofer baffle in the Leslie speaker cabinet into a twirling blur. Smith switched to tenor for his solo, releasing smooth, pressurized lines, compressed to zip through the molded pipes of his imagination. On his "Say It Again" and Thomas' "Chaz Jazz," Smith cut release valves for his solos—screaming desperate on his own tune (while retaining a very pure tone); releasing fluttering bird noises in the early going of "Chaz," then replying to himself later in his solo with more urgent avian squabbling. Ransom was reliable thunder on the kit, firing the trio down the track with a thrilling, engineered propulsion that echoed Smith's. "Fool on the Hill" was the group's departure from the headiness. Yet they kept their heads appropriately in the ether: Ransom moved to the Cajon box drum to underpin Smith's spiritual ascent up the mountain with alto. Organ Ism then rose an angular, R&B wall of sound on the closer.

After this, the fusion of saxophonist Bobby Selvaggio's Grass Roots Movement felt perhaps even more stretched and moody than it might have otherwise. Selvaggio stuck to originals—four of the set's five numbers came from his Grass Roots Movement (Arabesque Records) album that was for release four days later. The fifth tune—"Flow"—was newer still, and played, so the saxophonist said, at his band's insistence. Bassist Kipp Reed was the lone Grass Rootist from the album, joined on this night by keyboardist Andrew Lawrence and drummer Chris Baker. The crew started, as indicated, with a few slowly evolving tunes—"Signature Needed," "Fish Food" and "Movement"—that allowed Selvaggio and, to a somewhat lesser extent, Lawrence, broad room to explore ideas and construct solos in a novelistic vein. The band maintained an involving ebb and flow with Selvaggio and Lawrence countering one another with distinct voicings and manners of telling a story. Reed lent a grungy bass fuzz to the affair, while Baker kept matters chugging along. "Flow," which Selvaggio dubbed a "fun little thing," actually took the group into deeper, darker waters, and proved a nice change of pace—thickly flowing with more gut and bottom than the previous numbers. The closer, "No Turn On Red," amped the groove, launching from a rush-hour-like stop-and-go propulsion, into free-flowing, weaving, wind-in-the-hair soloing and back round to traffic lights and city congestion.

Guitarist Kurt Rosenwinkel unleashed his full, reverberating tone on Saturday night. Backed by pianist Taylor Eigsti, bassist Eric Revis and drummer Ted Poor, Rosenwinkel ran through a set of mostly originals, starting with the title track from his 2010 release Our Secret World (Word of Mouth Music) and ending in the encore with "Under It All," the title track of an unreleased album from his days at Verve. Throughout, he crafted masterfully complex, speedy improvisations, packed with dramatic tension. Yet despite any pyrotechnics—and there were plenty, with the guitarist's blistering fingerwork garnering hearty bursts of applause and joyous calls from the audience on "Brooklyn Sometimes" and "A Shifting Design"—Rosenwinkel housed his art within a slow burn, never rushing to spill bucket loads of technical prowess onto the listener, but taking his time (especially on the second number of the night, "Déjà Vu") to construct richly woven tapestries, intricately involved with themselves and the overall framework of the music. The guitar-hero peaks were always well-founded and they relaxed organically back into the whole. Eigsti was a bit more economical in his outlay, but still set loose his share of solos to tangle the body and soul. Revis and Poor kept up a powerful drive, and by the end of a harried run through "Turns"—the final number before the encore—each member of the quartet was happily panting. "That was fast!" Rosenwinkel gasped. And, indeed, the show did feel to be over too quickly. 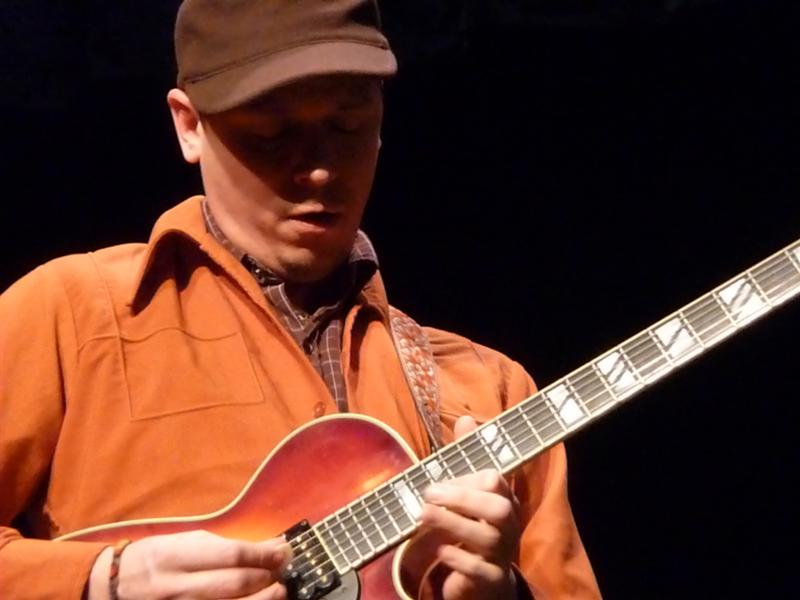 The matinee on Sunday brought out two local big bands, both comprised of musicians spanning the generations. The Lakeland group is comprised of Lakeland Community College students and other musicians from the local community, under the direction of Dave Sterner, who also serves as the festival's co-director. On this afternoon, the jovial bunch ran through eight Sammy Nestico compositions, distinguished by the sprightly rhythms of Troy Creagh's Fender Strat and allowing for ample soloing throughout the band. 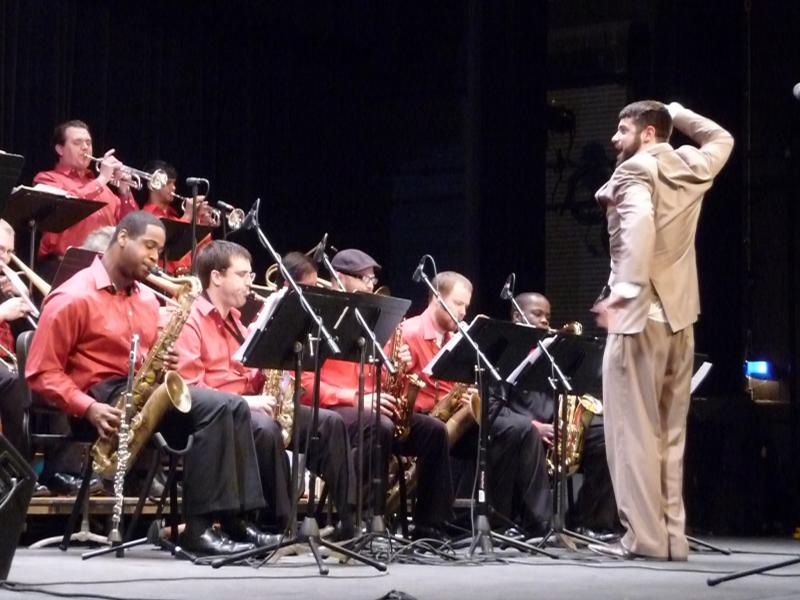 MOJO's reach seems a bit more broad, as it finds chairs for everyone from the scully capped hipster to the white-haired granddad, the sweater-vested prof to the wunderkind student on his way to Berklee. Under the direction of the always energetic Matthew Bott, the band hit the usual suspects—Ellington, Thad Jones, Benny Goodman, even Sammy Nestico—but also made room for Wayne Shorter's "Yes or No." Tenor saxophonists Johnny Cochran and Jevon Bogart, and altoist Keith McKelly were granted a lot of solo time, the tenors favoring bop runs, the alto man blowing mean soul. Trumpeter Mike Hazlett provided a nice arrangement of Charlie Chaplin's "Smile," while trombonists Chris Anderson and Sam Blakeslee traded inventive solos on Nestico's "The Plunger." Both bands supplied all the oomph, blare and danceable melodies one could ask for on a chilly Sunday afternoon. Their playing was a fitting close to this little Northeast Ohio festival that can.