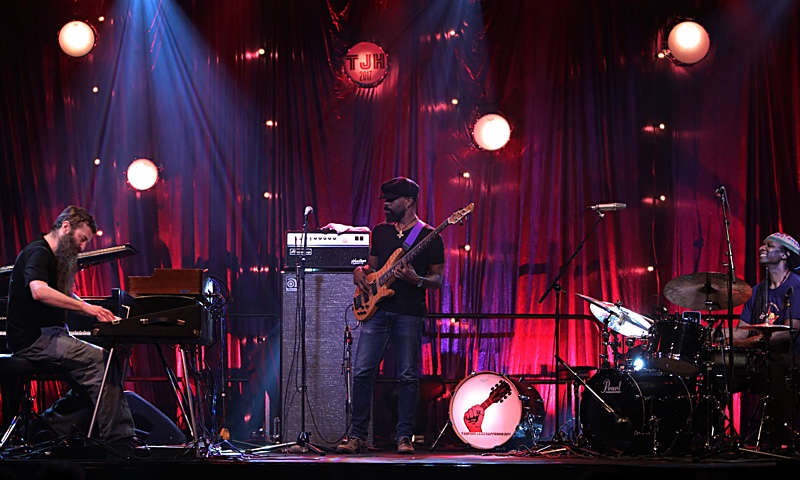 They were the winner of this year's Europe Jazz Network (EJN) Award for Adventurous Programming. Receiving the award at April's jazzahead! conference in Bremen, Tampere Jazz Happening and Artistic Director Juhamatti Kauppinen celebrated what has become 35 years of top-drawer programming. The 36th International TJH edition in November mightily continued that tradition.

In all, there were ten events, in which, altogether, 25 ensembles performed, every one of the shows filled if not to capacity close to it. The festival's three venues were once again home to all this great music: The intimate Klubi club (400 seats); the nearby large, acoustically resonant Tullikamarin Pakkahuone (600); and across the way, the rustic, cozy Telakka club (200), which also hosted an upstairs, mostly seated crowd with true-to-life video of the real thing downstairs.

Of the American bands at this year's festival, one that stood out for special mention was the New Zion Trio with keyboardist Jamie Saft. Joining Saft was longtime NZ bassist Brad Jones and drummer Hamid Drake. Performing in Pakkahuone to a full house in a mid-afternoon show on Sunday, the accent was on the upbeat, both temperamentally as well as rhythmically. With Jones flanked on either side by Saft and Drake in what felt like a friendly face-off between drummer and keyboardist, the result was a kind of sanctified party music as one tune inevitably rolled into another, everything marinated in some form of dub, reggae or an admixture of the two.

Serving as a kind of motif, Saft began the concert on the piano, playing beautiful almost classical lines that subtly allowed for an eventual dub vibe. What followed had as much to do with rock as the music became more animated with his pivot to the electric keys. This was Saft's "Twelve Tribes," a medium-tempo piece that let Jones' bass come forward for a spell as the lead instrument. This pattern repeated itself: a fully acoustic approach on the Steinway eventually giving way to a light touch on either Saft's Korg CX-3 or his Rhodes Stage Piano. As the band moved through "Twelve Tribes" and into "The Red Dies," Saft's funky electric chords tastefully laced with some blue chords led to Drake's first solo, a powerful yet restrained groove that enhanced the upward pulse.

And while Drake (new to the band on drums) and Jones were essential partners in fomenting the unique blend of dub and reggae that is New Zion, it was clear that this was Saft's program and show. The playful bounce of "Chalice Pipe" maintained the set's buoyant spirit, Saft's playing continually mixing piano virtuosics up and down the keys with a slew of chords and arpeggios, the sound of an churchly, funky organ suddenly front and center. Another two-chord vamp, "Chalice Pipe" suggested that kind of sanctified party music where anyone could get up and dance (no one did, at least not from where I was sitting). It was very rhythmic, greasy even, Drake's command of the skins and cymbals deep in the pocket.

The Mighty Diamonds' "Pass The Kutchie" came next as the band's first of two covers. Another playful trip, the group's instrumental take made you forget the usual lyrics that streamline this song. It was one long groove that built in intensity, the pulse behind the melody hypnotic if sluggish at times. Drake's snap-crackle snare and bass-drum accents combined with Jones' thick, resonant notes deepened the groove further. And with concert-closer "Hear I Jah" it was as if in making love to the dub, the vibe, the trio itself had become the music.

New Zion's other cover, Pharoah Sanders' "Thembi," served as the band's encore number. Breaking the spell, if only temporarily, "Thembi" contrasted with everything that came before, the tune's syncopated up-tempo Latin pulse (almost a samba) a move off the upbeat even as it centered around another two-chord vamp. Lines from Sanders' familiar "The Creator Has A Master Plan" made their way into Saft's playing. And, as if on cue (probably), the stage lighting gradually moved from purple to ruby red as the band, seemingly unable to resist, slipped back in and out of the dub.

Away from the excitement generated by the music at this year's TJH, a few other ingredients were apparent. The first had to do with the city of Tampere itself. As mentioned, culturally rich Tampere (population just under 230,000) served as an ideal setting for a eclectic, four-day music festival. The city's impressive restaurants, resource-filled Tampere City Library and elegant, well-endowed Tampere Hall (home to the Tampere Philharmonic Orchestra and world-famous Moomin Museum) all point to a remarkable jewel in the heart of Finland, a city with its sights on becoming Europe's 2026 Cultural Capital.

Having now experienced three TJHs, I was once again reminded that, in addition to great programming, there are a few other constants that come with the festival. The first has to do with the degree to which so many of its volunteers dedicate their time and energy, everyone playing their part to help make for a great cultural experience. Along with those who are instrumental in pulling off the successful succession of concerts (offstage and behind it), from ticket and booth operators to the drivers who provide transportation for the many visiting artists and journalists, to the many office staff and promotion people, there are the equally dedicated people who serve in the artist and guest lounge. The kitchen staff consistently offers delicious, gourmet-style eats for the lucky, steady patrons on hand, enhancing the important give and take between artists, journalists and other music professionals who linger. And, similar to the TJH's music presentations, this kitchen runs like a German train schedule: on time, and without a hitch.

Speaking on behalf of the many kitchen staff volunteers this year, when asked to comment on their participation at TJH, one of the best quotes came from Anna: "One of the main reasons to come to work as a volunteer in the TJH is the atmosphere. Especially in the lounge, the atmosphere is always warm, people feel good and they appreciate the food we make. It feels really nice. It's important to make the artists and guests stay as nice as possible. And, of course, "music is the main thing" [2017's TJH banner message].

"I appreciate the opportunity to hear excellent jazz music from all over the world," Anna added. "And I guess that's what makes the atmosphere so magical: people gather here from around the world to share the same love for jazz. So this festival and lounge create a space for different people who share the same passion. It feels important to be part of that. To help make it possible."