By TROY COLLINS
October 7, 2009
Sign in to view read count 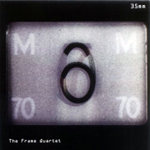 Chicago-based multi-instrumentalist, composer and bandleader Ken Vandermark is widely known for paying homage to artists of various disciplines, regularly including dedications in his song titles to those who have inspired him. On 35mm, the studio debut of his newest ensemble, The Frame Quartet, Vandermark reveals his longstanding debt to cinema, not only in name, but in approach.

Filmmaking is an intensely collaborative medium, and The Frame Quartet embraces this concept implicitly; Vandermark is the sole writer, yet each of the album's five compositions is conducted by a different member of the quartet, except for "M.E.S. (for Merce Cunningham)." Though only "Lens (for Ennio Morricone)" is dedicated to an artist directly involved in film, all of the pieces embrace the art form's predilection for linear development. Eschewing conventional forms, these labyrinthine structures transition suddenly between modes, emulating cinema's narrative flow with dramatic shifts in tone that parallel the sudden splice cuts found in celluloid editing.

The session unveils an array of evocative styles, including bluesy noir, pungent funk, and austere impressionism. "Multi-Chrome (for Peter Brotzmann, Han Bennink, Fred Van Hove)" opens the record with an ominous vamp that suddenly vanishes, leaving an electro-acoustic cello cadenza in its wake. A serpentine pulse materializes, leading the group through myriad changes before downshifting into a somber tenor and bass duet that precedes the recapitulated theme. The remainder of the album follows similarly unpredictable patterns.

"Lens (for Ennio Morricone)" modulates from pliant swing to syncopated grooves, intensified by blistering solos from Longberg-Holm and Vandermark before dissipating in a tranquil coda. The sober pointillism of "M.E.S. (for Merce Cunningham)" features the session's only completely acoustic performance, while "Theater Piece (for Jimmy Lyons)" is the album's epic centerpiece. Careening between movements, the piece vacillates from frenzied interplay to hushed aleatoric discourse, featuring numerous solo cadenzas and intimate duets. Ending the record with a burst of amplified abandon, "Straw (for Steve Lacy)" highlights Lonberg-Holm's spiky cello and Vandermark's scorching tenor in a variety of settings, from pensive silences to slashing electrified downbeats.