By BRUCE LINDSAY
April 4, 2012
Sign in to view read count 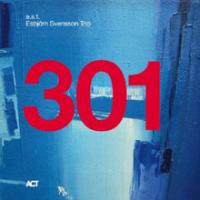 Australia in January 2007, the height of summer, a time for relaxing on the beach and for taking it easy in the post-Christmas comedown—but not for the Esbjörn Svensson Trio. Hiring Sydney's Studio 301 for a couple of days, the band spent its time jamming and improvising, yielding what would seemingly be the groundbreaking trio's final studio album, Leucocyte (ACT, 2008), for Svensson's untimely death was less than 18 months away. In late 2011, bassist Dan Berglund and drummer Magnus Ostrom returned to the unreleased music and, in collaboration with sound engineer Åke Linton, prepared 301.

301 refers to the recording studio, but it can also be read "3 as 1" or "3 minus 1." Semiologists might wish to linger on those options, but for e.s.t.'s many fans, the music remains the priority. Unsurprisingly, there is a distinct similarity in sound between 301 and Leucocyte: a mix of acoustic instrumentation and electronica in which first one, then the other, takes center stage.

Of the electronica-led tunes, the most successful is "Three Falling Free Part II." Öström's powerful drumming dominates initially, and a heavy dose of electronically created noises gives the tune a decidedly prog-rock sensibility—e.s.t. channeling the spirit of ELP. The overall feel is pretty lighthearted, but elsewhere there are times when the electronics tend to detract from, rather than enhance, the acoustic instruments. The wholly electronic "Houston The 5th" sounds oddly anachronistic and out of place.

When the bass, piano and drums are given control, the organic beauty of e.s.t.'s music shines through. "The Childhood Dream" combines Svensson's delicately sorrowful piano with Berglund's restrained bass playing and Öström's hand drums, the result sounding like a valediction. "Behind The Stars" is a Svensson solo, apart from Berglund's occasional sparse arco bass. It's a graceful, contemplative ballad. On "Three Falling Free Part I," Svensson's moving, emotive piano has a real "after hours" sound thrown into relief by the freer, more fragmented bass and drums. By contrast, the lengthy "The Left Lane" is a more upbeat, jaunty number. Driven by Öström's percussion groove, Svensson and Berglund gradually rack up the tension across 13 minutes, before the release comes with the bassist's pizzicato solo. It's a quartet of tunes that stand with the best of the e.s.t. canon.

The jazz and rock catalogs are littered with posthumously released recordings that do nothing to enhance the reputation of the musicians concerned. There need be no such concern about this album. 301 carries on where its predecessor left off. While it doesn't feel quite so innovative—it does, after all, appear four years after Leucocyte—it's still stylish and at times hauntingly beautiful. It's a worthy, welcome reminder of the majesty of e.s.t.