By DAN BILAWSKY
August 6, 2013
Sign in to view read count 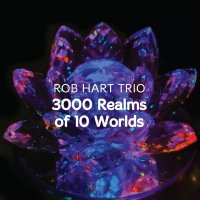 Drummer/percussionist Rob Hart may be based in the San Francisco Bay Area, but his music knows no one particular home. On 3000 Realms Of 10 Worlds, Hart works from a world-wise vantage point, liberally utilizing, tweaking, and mixing the stylistic vocabulary and components endemic to various locales. In this respect, he creates something of a broad-minded statement that varies from track-to-track but doesn't feel disjointed; some artists look to create a cohesive-and-consistent sound when they make a record, but Hart intentionally produces something that's a bit more sprawling in nature.

Hart, a graduate of Berklee and member of Vic Firth's education team, has long embraced diversity in his sideman pursuits, working with everybody from The Isley Brothers to in-demand bassist Larry Grenadier to Poison's C.C. DeVille. That love of different styles and sounds comes through in his own work, as he references everything from Indian music ("Saffron") to reggae ("Xaminer") to Brazilian samba grooves ("Samba De-Luchia") during the course of this wide-ranging program. In addition to the various originals that make up Hart's travelogue, he delivers two interesting rewrites—a flute-enhanced take on The Beatles' "I Will" and a dynamically expansive trip through Led Zeppelin's "Kashmir." Both numbers put the spotlight on the drummer's inventive arranging skills.

The album has its downsides, which include a lack of melodic riches and the tendency to occasionally come off more like a stylistic guide or overview than a single, solidly packaged artistic statement, but its upsides make up for that; 3000 Realms Of 10 Worlds features more than its fair share of fine playing and engaging grooves. That's enough to keep spirits high and ears pinned to the speakers throughout this inventive record.