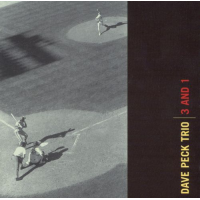 One of the more enduring combinations of musical instrumental expression, whether it be for jazz or classical, is the piano trio. The great jazz pianists from Teddy Wilson and Art Tatum through Bill Evans and Oscar Peterson to Brad Mehldau and Keith Jarrett have used this vehicle to present their personal jazz expressions. With this offering, Seattle-based Dave Peck has made a legitimate claim to be admitted to this exalted company. On the jazz scene as a performer, arranger and composer for more than 25 years, Peck is no newcomer. His performing credentials include many sideman assignments with such notables as Chet Baker, Sonny Stitt, Lee Konitz and Art Farmer. He has worked with Bud Shank as arranger/composer since 1985.

Peck's approach to the piano falls somewhere in between Bill Evans and Oscar Peterson. Admittedly a wide gap, but plausible here. He has that wonderful thoughtful lyricism which characterizes Evans' work but he appends a bit more embellishment to his playing than the late master, nudging him closer to (not close to) Oscar Peterson. This respectable uniting of styles is apparent in a perceptive 71/2 minute exploration of "Star Eyes" where every aspect of this popular 1943 classic standard is probed, pushed, pulled and prodded by Peck and his cohorts. And his cohorts are critical to the success of this session. Dean Hodges' drums set the pace without ever becoming intrusive staying with the traditional role of a drummer in a small group. Deardorf, on the other hand, gets ample opportunity to enliven the musical feast with his refreshing bass solos. He is especially telling on If "I Were a Bell" and on Monk's "Eronel".

With a play list of jazz and classic standards, Brazilian rhythms and an original by Peck, 3 and 1 is welcomed to the jazz piano trio literature with open arms. Recommended. By the way, the crazy label moniker Let's Play Stella finds its derivation in a joke about the naming of Peck's dog, now dubbed Stella.

If I Were a Bell; Soul Eyes; Eronel; If..Then..; Star Eyes; Alone Together; Ana Luiza; 3 and 1; Every Time We Say Goodbye