By IAN PATTERSON
September 27, 2012
Sign in to view read count 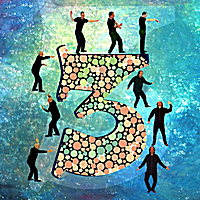 Stalwarts of the Chicago music scene and veterans of an impressive array of collaborations with a who's who of jazz, pianist Bradley Williams, bassist Eric Hochberg—who together penned all the tunes— and drummer Jim Widlowski make their debut trio recording with 3, an elegant, straight-ahead set of originals. Much of Williams' recorded output over the past twenty years has reflected his love of the music of Cole Porter, Jimmy Van Heusen, Frank Loesser and The Great American Songbook, so the unhurried, melody-driven lyricism in the playing here should come as no surprise. Whilst the music reflects a more romantic era of the classic piano trio, there is nevertheless, a subtly contemporary air about the music.

The collaborative nature in the play is underlined by the fact that the three are rarely heard in isolation. Apart from the delicate piano miniature of "Twilight Prelude" and Hochberg's pretty solo vignette, "little 'e,'" there are barely more a few seconds of drum improvisation here and there when the others lay out. When piano is flowing, drums and bass never let go of Williams' tail; similarly, even on the most intimate bass solos—with Hochberg releasing a few notable ones—flickering piano, and cymbals as quiet as gently ticking clock are almost never absent.

Gently undulating improvisational waves ebb and flow throughout these compositions, though in lieu of overtly lead lines there is, rather, a sense of subtle shifts in the balance of the trio, such as on "Penultimatum" and "The Garden." Three distinct voices are ever at play, sometimes in disciplined unison, but more usually in independent, interweaving patterns whose aim is the higher goal of a collective voice. The more traditional "For Crowley" is evocative of a charmingly lazy Duke Ellington blues; rhythmically loping, Williams casts tumbling lines between shorter phrases and there's a lovely lightness of step in the trio's gait.

The distinctive melody and vibe of "In the Delta Valley" leans towards the classical piano jazz of yore; walking bass and ride cymbal stoke the trio's engine as Williams stretches out, followed in turn by Hochberg. Both musicians boast terrific chops, but never at the expense of the narrative, which with this trio is essentially soulful and melodic. The trio juggles and flirts with yet another pretty melody on "Waiting...Waiting...," shaped by a repeating piano motif and gorgeous bass line, though Widlowski's inventive, light touch significantly defines the tune's folds and contours.

The grooving, celebratory New Orleans-esque shuffle of "Clybourn Strut" is followed by Hochberg's quietly rhapsodic "Song for Sarah." This lyrical gem might have made a better closing trio statement then the bop-inspired "Plumb Bob"; whilst exuding plenty of energy, this tune, tossed around between the musicians, has more the feel of a rousing first set closer. This, however, is a minor criticism which fails to detract from a fine recording where three musicians on one wavelength produce elegant, timeless sounds.