By JAKOB BAEKGAARD
April 9, 2014
Sign in to view read count 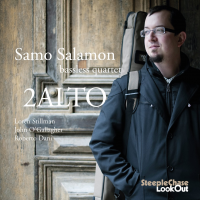 2014 has already been a productive year for Slovenian guitarist Samo Salamon. Earlier this year, Salamon released the ambitious Orchestrology where he recorded with strings and now comes an album with focus on the sound of alto saxophones.

2Alto finds the guitarist in the familiar company of drummer Roberto Dani, who also played on Orchestrology. The new faces this time are the alto saxophonists Loren Stillman and John O'Gallagher. Salamon wrote new music, specifically with these master stylists in mind, and the result is a true feast of contrapuntal playing that revives the legacy of saxophonists Lee Konitz and Warne Marsh.

The material Salamon provides gives the musicians plenty to work with. There are both beautiful and breathy themes like the motif on the opener "Fairy Tale" and the irresistible intertwining lines on "Monder Bag," an homage to guitarist Ben Monder, but also explorations into wild territory on the knotty "Mr. Cynical" and "Man of Mystery" where Salamon plays with all the colors on his instrument. The latter finds him in an experimental mood, playing an abstract intro that sounds like a drunk spaceship before he introduces a catchy riff and the saxophones enter in a rhythmic dance.

2alto is another winner from an adventurous guitarist who continues to find new ways to challenge his instrument by providing new contexts that expand his sound and compositions.