By SARA VILLA
August 3, 2010
Sign in to view read count
Imagine traveling by car for hours in the summer heat of Italy's July 2010. At last it is early evening, and you reach the borders of a breathtaking medieval town. A soft breeze blows around you while you walk through the steep slopes which lead you to the centre. You follow the sounds you so eagerly waited for; they are as welcoming as you had imagined them. The elegant, sharp notes of Sonny Rollins' sax fill the atmosphere, Arena Santa Giuliana is packed with jazz enthusiasts, and you know, for sure, that it is going to be a memorable night.
Since 1973, its foundational year, Umbria Jazz has given to its aficionados an endless series of similar astonishing moments, always distinguished by the desire of creating brand new collaborations among jazz musicians from all over the world. This year, for example, the last of the six concerts belonging to the special ECM concert series was led by Enrico Rava with Stefano Bollani, Tore Brunborg, Anders Jormin and Manu Katche; an original quintet designed by label head/producer Manfred Eicher, who personally discussed the history of his award-winning record label with Gary Giddings on 12th July 2010.
Another original ensemble was organized for the free Brazilian event which closed the festival. On 18th July, Arena Santa Giuliana was the stage of Sons e Movimentos do Deseo, a dance and capoeira performance of former meniños de rua, rescued by the charity association Projeto Axé, with music by Hamilton de Holanda,Yamandu Costa, Giovanni Hidalgo and Horacio "El Negro" Hernandez, with Italian singer Fiorella Mannoia as special guest.
Celebrating a century after the birth of gipsy jazz icon Django Reinhardt, Umbria Jazz's program also included a four concert tribute to the guitarist, opened by the Reinhardt, Manetti and Eche-Puig Trio, followed by Florin Niculescu Trio, Christian Escoude Trio Gitan, and The Rosenberg Trio with Bireli Lagrene.

Besides the quality and number of its concerts, another peculiarity which makes of Umbria Jazz such a unique jazz festival, is the educational and historical approach to jazz music. For twenty-five years the Berklee College of Music has been holding a Summer School at Umbria Jazz. To celebrate such a special occasion, the college of music awarded its honorary degree in jazz music to musician, composer and jazz historian Renzo Arbore, jazz pianist Stefano Bollani, and Cuban drummer Horacio "El Negro" Hernandez, during a special event on 15th July.

The following day Renzo Arbore introduced a documentary dedicated to Italian American jazz legend Nick LaRocca, entitled Da Palermo a New Orleans e fu subito jazz ("From Palermo to New Orleans. Jazz: There It Was"), which seemed to dialogue with the other documentary released this year, My Main Man—Appunti per un film sul jazz a Bologna, which focused on Festival Internazionale del Jazz di Bologna. 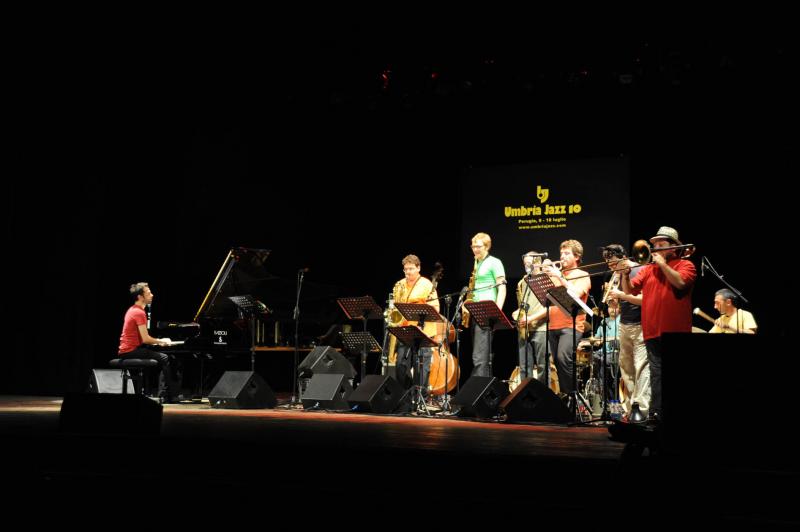 The festival was also a good occasion to meet Ashley Kahn and discover his analysis of Miles Davis' Bitches Brew (Columbia, 1970) ("Bitches Brew at 40: Fusion or Confusion?") and get hold of the second volume of Adriano Mazzoletti's Il Jazz in Italia, the most impressively detailed historical text of the evolution of jazz in Italy to date.

For those who, on top of the normal concert sets and educational events of Umbria Jazz, wished to fill their days with improvisation even at lunch and dinnertime, a special series entitled "Musica e cucina" followed the traditional jazz club combination of music plus tasty food, in this case a variety of Umbrian delicacies at Bottega del Vino, Ristorante La Taverna and Hotel Brufani. The artists involved in this year's culinary experience were Italian pianist Renato Sellani, a regular performer and iconic figure of the festival, with Massimo Moriconi on double-bass, Kim Prevost and Bill Solley, Hilary Kole's Quintet, Mitch Woods, and Alan Harris, who enchanted his audience with his smooth versions of the major 1950s ballads.

Now let's go back to your 24 hours of Umbria Jazz. If you are not an early bird, and you prefer your oneiric state to dwell a little longer on the unique Colossus experience of the night before, you could wake up late and reach the city centre around 11. You would be just in time to join the New Orleans Coolbone Brass Band, marching together with a crowd of bouncy fans along the notes of "Down By the Riverside." All of a sudden they bump into a couple of newlyweds, and they switch to a slow, romantic version of "You Are So Beautiful to Me." The groom and bride start dancing, people clapping hands around them, and the general atmosphere takes an unexpected romantic turn.

At 12:00 noon, David Binney's Quartet welcomed the audience at Teatro Morlacchi. Binney displayed an intense, yet sensitive style, never crossing the line that separates energetic and masterful technique from pure instrumental athleticism. With him were the musicians seen often in his 55 Bar performances in New York City: Jacob Sacks on piano, Zack Lober on bass and Dan Weiss on drums. Sacks and Weiss turned their solos into an amused rhythmical battle and seemed to stage an ironic jazz version of High Noon. Almost to counterbalance them, when Lober's turn came, he preferred a smooth diminuendo, full of pathos. Then Binney came back, and the audience kept asking for more. 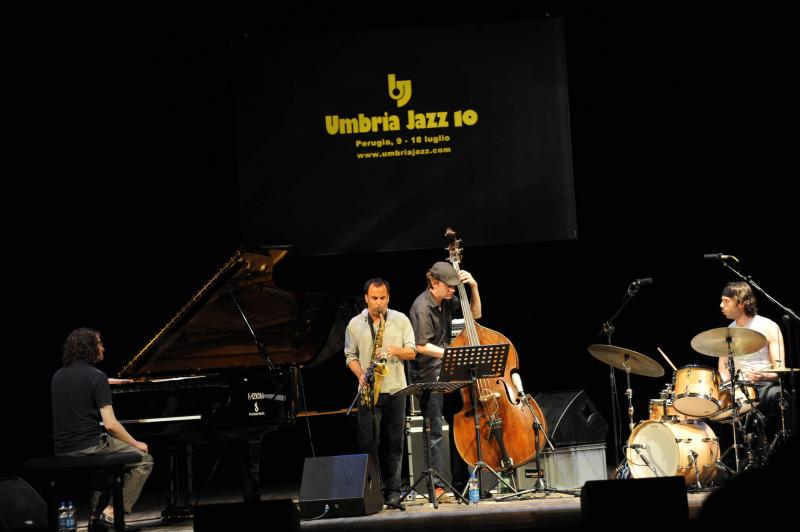 In the afternoon, two concerts awaited: Giovanni Guidi and his Unknown Rebel Band, with trombonist Gianluca Petrella, at Teatro Morlacchi and the De Vito/Warren Duo at Oratorio Santa Cecilia. Guidi, a talented young pianist with an already impressive series of projects in his portfolio, was discovered by Enrico Rava—as happened to Stefano Bollani some years ago—and now regularly features in the trumpeter's New Quintet.

The Unknown Rebel Band stems from the paraphrase used by Time Magazine to describe the Tien An Men student who faced the tanks during the 1989 revolution. The music, composed by Guidi and arranged by Dan Kinzelman, took inspiration from sources as diverse as Charlie Haden's Liberation Music Orchestra, Carla Bley's compositions, and Max Roach's "We Insist! Freedom Now Suite." The other rebels of the band represented the most interesting brass musicians of the new Italian generation of jazzmen: Gianluca Petrella on trombone, Flavio Sigurtà and Mirco Rubegni on trumpet, Daniele Tittarelli on alto and soprano sax, Dan Kinzelman on tenor sax and clarinet, David Brutti on baritone and bass sax, Mauro Ottolini on trombone, Giovanni Maier on double-bass, João Lobo on drums and Michele Rabbia on percussion.

The other concert of Perugia's afternoon featured Italian singer Maria Pia De Vito and Welsh pianist Huw Warren, who presented a duet developed on the Aristotelian concept of dialektos. As De Vito pointed out, their aim was to refer not only to the complex articulations of human language, but also to the similarity between our idiom and the singing of birds. Taking inspiration from this parallelism, the duo performed a completely acoustic set—De Vito's trills almost literally metamorphizing into a nightingale's song— in the ethereal atmosphere of the fully restored baroque Oratorio Santa Cecilia.

A quick walk along Corso Vannucci, with an Italian ice cream in your hands, and it's time to move towards Arena Santa Giuliana for the evening concerts. It's an hour before the beginning of the performances and the open air tiers start filling right now with jazz lovers, some happily wearing T-shirts of previous editions of the festival, their eyes sparkling with expectations. Herbie Hancock and Tony Bennett's names are filling the air.

From the very first minute, Hancock's concert revealed itself to be twofold. On the one hand, he presented his new Imagine Project, with songs such as John Lennon's masterpiece—which was inspirational to the whole work—and "Don't Give Up," featuring vocals by Kristina Train. On the other hand, he contoured these pop selections through arrangements interspersed with rhythmical changes, heightened by drummer Vinnie Colaiuta's sensitivity. The heavily synthesized sounds introduced some of his funky 1960s/1970s jazz hits, starting with "Watermelon Man" and "Chameleon" and ending with a reprise of "Cantaloupe Island." Hancock's choice of hyperbolically distorted notes, backed by Greg Philliganes on keyboards, reached its height when he finally embraced the keytar and started jamming with Tal Wilkenfeld on bass and Lionel Loueke on guitar. 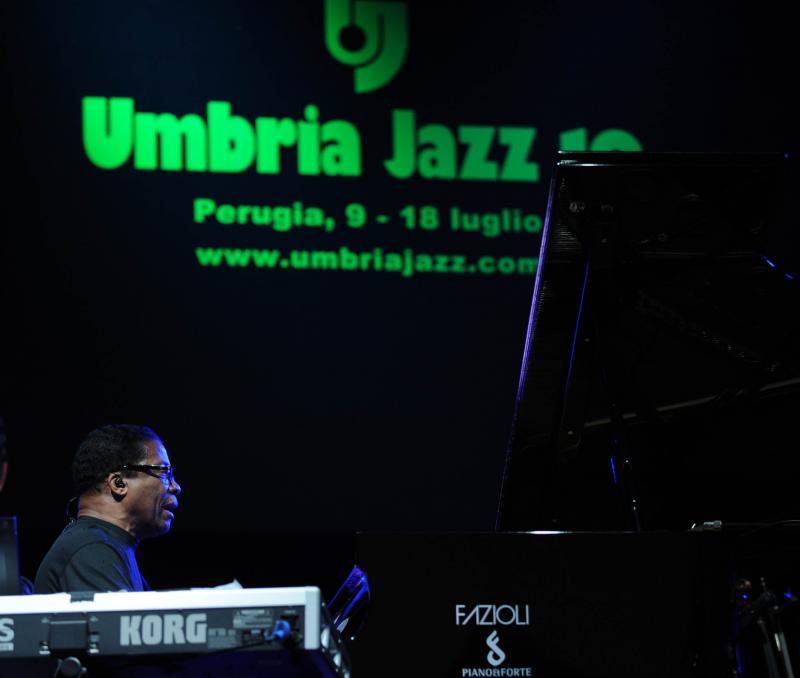 A short break, with just enough time for a few comments, and Tony Bennett's performance began, opened by his daughter Antonia, with Lee Musiker on piano, Gray Sargent on guitar, Paul Langosh on bass and Harold Jones on drums. Bennett, his voice, charm and charisma unscathed by the passage of time, tipped, tapped and twirled on his classic crooner repertoire, with the smooth, at times softly whispered, "The Way You Look Tonight," his touching version of Charlie Chaplin's "Smile," and a joyful "The Good Life," jokingly dedicated to Lady Gaga. With his energetic presence and long-held final notes, Bennett seemed to gentlemanly mock the mythicizing of youth, reminding us that it's still hip to be square.

The evening was reaching its end, but there were still some stunning concerts left for the night owls, including legendary Ron Carter Golden Striker Trio, featuring Mulgrew Miller and Russell Malone at Teatro Morlacchi. If was your first time at Umbria Jazz, at this late hour at night you would realize, with crystalline clarity, that you want to be back here, and would start checking the dates of both the 2010 winter edition in Orvieto (29 December—2 January) and of Umbria Jazz 2011 (8-17 July 2011). If it was your second to nth time here, it means by now you've got it... under your skin.

All Photos By Giancarlo Belfiore, Courtesy of Umbria Jazz