By WOODROW WILKINS
November 23, 2010
Sign in to view read count 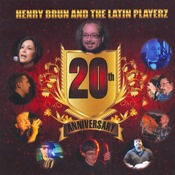 A collector's edition is only as good as the source material. In the case of Henry Brun and the Latin Playerz, the source is an eclectic representation of their work.

Brun, a native of the Bronx born to Puerto Rican parents, plays congas and a variety of other percussion instruments. His career includes an international tour with the U.S. Air Force band, Tops in Blue, and work with Maynard Ferguson, Bob Hope and Lucille Ball. He formed the Latin Playerz in 1989, an ensemble that mixes Latin, rhythm and blues, swing and straight-ahead jazz.

20th Anniversary is a mix of old and new—songs recorded as far back as 1992, combined with some previously unreleased material. Scattered among some American pop standards, that have been covered by numerous jazz artists, are a handful of Latin tunes.

"Stirring My Emotions" is a pop ballad, featuring vocalist and percussionist Judi DeLeon, who co-wrote it with Brun and sings like a hybrid of Gloria Estefan and any of several R&B singers. Tenor saxophonist Gabe Pintor contributes some fills and a solo in the middle, while Billy Satterwhite's bass line gives the piece a smooth groove.

Phillippe Vieux plays flute on an enchanting arrangement of "Besame Mucho," where DeLeon's lead vocal add an ethereal quality. The piano, bass and percussion are clean, as DeLeon and Vieux blend beautifully.

Prominently featuring the horns, the sassy "Get It While You Can" spotlights co-arranger Adrian Ruiz occasionally grinding trumpet solo, while Satterwhite also enjoys an extended solo. Pianist Travis Davis follows with a lengthy exchange with the percussionists.

20th Anniversary is a more appropriate title than "Greatest Hits" would be. Rather than suggest that all of these songs are "great" or even "hits," Brun and co-producer DeLeon have assembled a diverse sampling of the band's work. A few of the songs were recorded in 2010, but even some of the older selections are previously unreleased.

About Henry Brun and the Latin Playerz