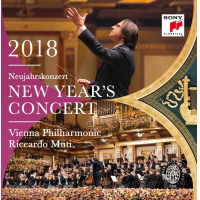 It is a yearly ritual. Rather than watch the ball drop on Times Square, I tune into my local Public Television station to watch the Vienna Philharmonic's annual New Year's Day concert. This yearly event features a different conductor every year, leading the orchestra through a program of waltz music, not the least of which comes from the famous Strauss family (Johann, et al. not Richard). Hell, there is even some polka and marching band music. Now, I know what you are thinking, "This is some silly claptrap from a guy who watches Lawrence Welk reruns from the 1970s on Saturday night." And, so what if that is true?

With its origins in the early 19th Century, it would take the program a century to solidify. In 1939, Austrian conductor Clemens Krauss inaugurated a New Years' concert tradition with the Vienna Philharmonic Orchestra dedicated to German Winter War Relief effort. After the end of World War II, this concert series survived, as its German wartime origins faded imperfectly from the picture. The inaugural performance was the only time that the concert was not presented New Year's Day, but instead on December 31st of that year.

As the program evolved, certain traditions appeared. Popular in the later post-war programs, there were originally no encores performed in the early programs first being introduced by Krauss in 1945. Encores were not instituted in the concert program until 1945. During Krauss's tenure, he almost always included Johann Strauss, Jr.'s "Perpetuum mobile" either on the concert or as an encore. The waltz "The Blue Danube" was not performed until 1945, and then as an encore. The Radetzky March was first performed in 1946, as an encore.

Today, the typical program goes something like this: the concert is performed by the Vienna Philharmonic on New Year's Day morning in Vienna, Austria. The concert is presented at the Musikverein at 11:15 AM. The orchestra performs the same concert on December 30th, 31st, and January 1st but only the last concert is regularly broadcast on radio and television. The concert is typically composed of 14-20 compositions, plus three encores. The published program typically includes waltzes, polkas, mazurkas, and marches. Of the three encores, the first is typically unannounced and is often a fast polka. The second encore is Johann Strauss, Jr.'s "The Blue Danube Waltz" whose introduction is interrupted by applause of recognition and a New Year's greeting from the conductor and orchestra to the audience. The third and final encore is Johann Strauss, Sr.'s "Radetzky March" always including spirited audience participation.

The first recording of the Vienna Philharmonic's New Year's Day concert was January 1, 1979 with Willi Boskovsky conducting the orchestra. Notable recordings made since that time include Herbert von Karajan's 1987 performance and Carlos Kleiber's 1988 and 1992 performances on Deutsche Grammophon; Nikolaus Harnoncourt's 2001 and 2003 performances on Teldec and DG; and Daniel Barenboim's 2009 and 2014 performances on Decca. Each release has its own personality, typically reflecting that of the conductor and the tone of the times.

So, what of maestro Riccardo Muti's fifth appearance (his previous ones being 1993, 1997, 2000, and 2004)? Historically, Muti has been universally noted for his performances of Verdi operas. When Muti was at Philadelphia, his Beethoven Symphony Cycle was the first recorded exclusively for compact disc. And, in 1992, Muti conducted performances of Leoncavallo's Pagliacci with Luciano Pavarotti in the lead tenor role. A recording was also made of these performances. Muti's Viennese thinking ca. 2018 is one of organic richness. If a certain quaint pastoral flavor can be drawn from these light classics, Muti does so, like some journeyman regional musician stopping in a salon to entertain. His performances here have an intimate, close-up feel, almost tactile in its realization. The opening, Johann Strauss, Jr.: Entrance March from the Operetta "The Gypsy Baron," is rollicking, its percussion marching-band ebullient and freshly presented.

If the program contains any surprises, they are the appearance of Franz von Suppe's Overture to "Boccaccio" and Alphons Czibulka's "Stephanie Gavotte." Suppe's piece inserts itself in the program providing a contrasting carefully executed performance against the earthy grain of the standard pieces. Tuneful and resolute, the Overture to "Boccaccio" is a study in total consonance and resolution. Czibulka's contribution reflects his military experience in precision and nationalism in the fold-nature of the melody. Pleasant surprises from the Strauss camps includes Johann Strauss, Sr.'s "William Tell Galop," and Jr.'s sublime "Tales from the Vienna Woods." The unannounced encore before "The Blue Danube" was Josef Strauss' "Unter Donner und Blitz."

Muti obviously enjoyed conducting this concert. Joy is what this music is all about. Muti's conduct of the program was filled with, for lack of a better word, mirth, an irrepressible happiness and hopefulness for the coming year.