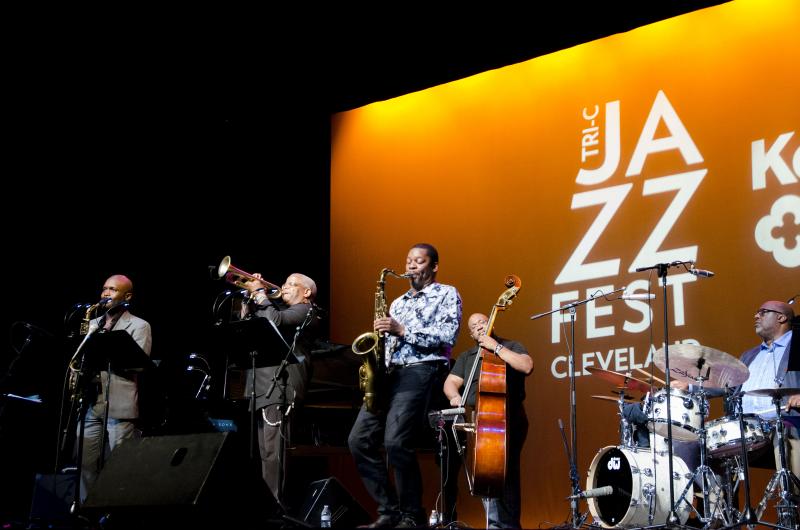 Although the Newport and Reno festivals have had a longer track record, there are many intriguing connections between the Detroit and Tri-C jazz festivals, both of which are celebrating their 38th birthdays this season. Fostering a strong educational component, both concerns sponsor associated events throughout the year. Furthermore, Tri- C's current director Terri Pontremoli served many years as the artistic director for the Detroit festival. This might have some bearing on the current direction she has taken the Cleveland festival. In 2014, festivities moved from the main college campus to the Playhouse Square theater district, as well as moving from an April event to one in June. By doing so, a free outdoor component could be part of an otherwise ticketed festival.

This year the giant outdoor stage featured seventeen regional acts over the course of two days. Nonetheless, with a packed schedule of paid indoor concerts concurrently running all day Saturday, it might have proven a bit too much competition for the event's own good. It is almost as if there were two distinct crowds on hand, one casually taking in whatever was happening on the free stage and the other with tickets in hand for Saturday's cavalcade in the theaters. Another idea popular with Detroit's fans is the talk tent featuring interviews and discussions with the artists. In its debut this year in Cleveland, it didn't appear to quite hit the momentum it deserves as a viable activity.

Although this reviewer has spoken these words about this festival before, they bear repeating. Be it a caveat of the college or the big-name sponsors, there seems to be a tendency in recent years to put much more emphasis on big shows with artists of limited jazz appeal. As such, the following commentary does not include coverage of performances by Boney James, Norman Brown, Chris Botti, or Boz Scaggs. In addition, it should be noted that most of the indoor performances were set up in two-hour blocks, pairing like artists for their own separate, hour-long sets. While packing in a lot of music, it also meant for a particularly long day on Saturday without much down time for breaks or sustenance.

Friday evening's main event was billed as Terence Blanchard's Blue Note Sessions. With a title that was a bit misleading, Blanchard elucidated how director Taylor Hackford gained the services of the trumpeter for his film The Comedian. A fan of the classic Blue Note sound, Hackford explained that he wanted something in a similar vein for the soundtrack. Much of what the sextet played consisted of untitled scores from the film, although Blanchard set up most of them by describing the associated scenes in the movie. Added to the front line, alto saxophonist Khari Allen Lee and tenor great Ravi Coltrane made the most of their time in the spotlight. Wisely, Blanchard offered Kenny Barron a featured spot, with the pianist joining forces with bassist David Pulphus and drummer Carl Allen on a gorgeous reading of "Isfahan." A titillating idea that just so happened to jell surprisingly well, the brief set went off without a hitch, with Coltrane stealing the show on several occasions.

Giving a nod to female jazz musicians, the first pairing on Saturday's schedule were separate sets by vocalist Alicia Olatujah and Jane Bunnett with her group Maqueque. Up first was Olatujah, a singer relatively new on the scene and who seemed to touch on many styles throughout her performance. Not so much jazz-based but shaped by soul stylings, Olatujah's best moments came with her update of Michael Jackson's "Human Nature" and a jubilant take on Djavan's "Serrado" complete with Portuguese lyrics.

Although her work at times can be mercurial while being emotionally detached, Jane Bunnett has never found a better showcase for her talents than in the group of Cuban women that make up her sextet Maqueque. Everything from the writing to the musicianship was nothing short of exhilarating during this, one of the best sets of the festival. Pianist Danae Olano was a marvel, throwing down montuno riffs with the same fluency as she rendered her classically-imbued solos. On bata, congas, and cajon, percussionist Magdelys Savigne added just the right textures to the ensemble, while offering inspired vocals on "Ain't No Sunshine When She's Gone." Violinist and vocalist Elizabeth Rodriquez formed a simpatico front line with Bunnett, who split her time between soprano saxophone and flute.

Mid-afternoon the focus shifted towards the many veins of Brazil's folk music, with Anat Cohen's Choro Aventuroso up first. Known for her diversity and disparate projects, Cohen first became enraptured with Brazilian sounds while attending Berklee College of Music in the '90s. Since 2000, she has made an annual trip to Rio for the purposes of communing with the local musicians. The choro style is marked by fast tempos and virtuosic displays and these elements were to be found in abundance during this intimate set. Sergio Krakowski's pandeiro was the heartbeat for Cohen's rapturous improvisations, with further support provided by Vitor Goncalves on accordion and Nando Duarte on seven-string guitar.

With the flash of the great Flamenco guitarists and the chops of a classical master, Diego Figueiredo wows audiences with his blend of jazz, samba, and bossa nova styles. Although at first it seemed like an odd pairing, Figueiredo's guitar meshed impeccably with the bass and drum sounds of Jeff Hamilton and John Clayton. Familiar numbers like "Bahia" and "Jazz 'n' Samba" brought out the best in the trio, Clayton's smile giving away his obvious enjoyment of the musical synergy. On Jobim's "How Insensitive," Hamilton delicately sculpted a wonderfully creative solo statement using his fingers to tap out tom-tom rhythms and to create shimmering cymbal accents.

Given his prominence on the current scene, Kamasi Washington was allotted his own set at the intimate Allen Theater, with a packed house verging on standing room only. Having seen Washington's presentation in Ann Arbor last fall, this reviewer has some hindsight when it comes to evaluating the saxophonist's performance at hand. Surprisingly, much of the routine, set list and banter from Washington was remarkably similar, an occurrence all too common with rock shows but seemingly the antithesis of a jazz set. Nonetheless, Washington's horn spoke with strength and conviction on audience favorites like "Henrietta, Our Hero" and "Leroy and Lanisha."

As part of a double bill featuring Boz Scaggs, singer Catherine Russell would be part of the evening's main event at the largest theater in the Playhouse Square complex, the 2854-seat Connor Palace. Having worked with some of pop music's most visible acts such as David Bowie, Steely Dan, Paul Simon, and Jackson Browne, it might come as a surprise that Russell would be steeped in the jazz and blues tradition. Fact is her father Luis Russell was a skilled jazz pianist who made a name for himself working with King Oliver and Louis Armstrong.

Russell announced the plans for her set with an opening romp on "Let the Good Times Roll." Her affection for singers such as Dinah Washington and Billie Holiday were abundantly clear in pieces such as "My Man's an Undertaker" and other numbers that revealed a skilled voice and infectious sense of humor. Furthermore, pianist Mark Shane and drummer Jerome Jennings offered the type of seamless support that pushed Russell to take some particularly appetizing risks without need of a safety net.