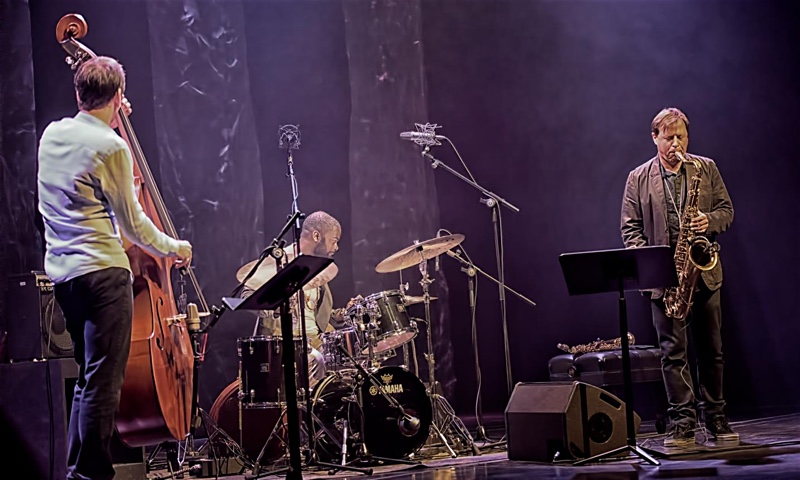 When they say the Montreal Jazz Festival is the biggest in the world, they're not kidding. Several city blocks full of concert venues, outdoor stages, and vendors. There are six seated concert venues on the grounds, and another six just offsite (literally down the block)—so many that I didn't get inside all of them in three nights of concerts. There's simply no way that a map of the grounds can prepare you for experiencing it for the first time.

The festival has always had a stellar lineup of jazz musicians on the bill. But with so many stages to fill—and a street party that draws many who may not be jazz fans—there's also plenty of folk, world music, and pop music of all sorts. Other genres were strongly in evidence during the opening festivities.

The festival's Opening Concert was headlined by the American singer Melody Gardot, with singer Lisa Simone opening. Simone's introduction mentioned her "good DNA," and as the daughter of the legendary Nina Simone it's hard to argue with that. She shares some of her mother's jazz/pop approach, but without the dark corners, and is almost exclusively a singer-songwriter rather than an interpreter of others songs. Most of the material in her set came from her recent album My World (Sound Suveyor Music, 2016), beginning with opener "Tragique Beauty." Electric/acoustic guitarist Herve Samb began the tune to bring Simone onstage, and was her right-hand man throughout the performance. The group gave an energetic reading of their first Nina Simone cover, "Ain't Got No/I Got Life" (a medley from the musical Hair that became a surprise hit). Samb brought the song to its climax with a high energy wah wah solo, one of several times he took his acoustic/electric guitar into pure electric territory.

"Hold On" displayed Simone's comfort onstage, as she moved freely beyond center stage during the performance. Bassist Reggie Washington got the spotlight with a solo introduction to "Expectations." Simone is generous to her band members, contributing to the unified stage vibe. She took her stage wandering to another level with "Unconditionally" (her song about becoming a mother). Most of it was sung from the audience with a wireless microphone as she moved around the perimeter of the main floor, shaking hands with audience members as she went. She returned for a quick encore: "Work Song" by Nat Adderley, with lyrics by Oscar Brown Jr., a classic jazz blues that had also been performed by her mother. Great energy and showmanship: the audience was definitely warmed up.

Melody Gardot is clearly a Montreal favorite. As she entered the stage in dramatic, bright lighting she was greeted with a standing ovation. She immediately picked up an electric guitar and launched into "Same To You" from her recent album Currency of Man (Verve, 2015). Gardot is often labeled as a jazz singer, but there was no jazz flavor in the music I heard. The opener was rock all the way, and she moved to piano for the funk tune "She Don't Know" (a song about a street walker, which she sang after a saucy spoken introduction). She switched back to guitar for the blues "Bad News," a sultry slow burner. Still not jazz, but she definitely has some range.

Scheduling overlap caused me to miss American singer Gregory Porter's opening act. I came in as he was singing his song "On My Way to Harlem," a song about all the great African-American artists associated with the place—Duke Ellington, poet Langston Hughes, even Marvin Gaye (including a quote from "What's Going On"). It's a great statement of what Porter is about: respect for the past, but with a contemporary sensibility. It's immediately apparent that Porter is a jazz singer, albeit one with equal love for classic black pop music and gospel. He possesses a marvelous vocal instrument, a rich baritone that immerses the listener like a warm bath. Porter sang two selections from his current album Take Me to the Alley (Blue Note, 2015) next: the title tune (about seeing the humanity in the man on the street) and "Don't Lose Your Steam" (inspirational advice to a young man about following his dreams).

After another older tune ("Hey Laura") and "Holding On" from the current album, Porter introduced "Musical Genocide" as "a song for the music lovers...which I guess is all of you." A tour de force for the whole band, it was a paean to the heart found in classic black pop, which Porter does not hear in much contemporary music (the recurring line in the chorus is "I do not agree"). The opening bass solo teased a quote from "Smoke on the Water," then Porter entered singing "Papa Was a Rolling Stone." The piano solo morphed into a version of Bob Marley's "No More Trouble" (with an "I Shot the Sheriff" riff thrown in), and the band responded to a lyrical mention of Earth, Wind & Fire with another quote...and so it went. A little gimmicky, maybe, but good "name that tune" fun.

Neo-soul masters Sharon Jones & the Dap-Kings played the big opening free outdoor concert (Le Grand Concert D'Ouverture), a triumphant return after cancelling their 2013 performance for health reasons. Jones definitely looked to be in vibrant good health. After the longstanding soul performance tradition of introducing and spotlighting the band members, she gave an extended dance demonstration. The boogaloo, jerk, tighten up, funky chicken, peppermint twist, and swim all got energetic renditions, closing with a James Brown routine (Jones apologized for not being as good as the Godfather of Soul, but she looked convincing to me). In a large outdoor space with Jumbotrons you have to wonder if the crowd is even paying attention, but Jones got active audience participation when she asked for it.The set ended with two album title tunes: "100 Days, 100 Nights," and "I Learned The Hard Way" as a brief encore. Celebrate the occasion, pump up the crowd: mission accomplished.

New Orleans trumpeter Christian Scott aTunde Adjuah was the prestigious Invitation artist for the first three nights of the series. He started a rhythm loop on his computer and the band launched straight into their first tune, an electronica-tinged sound with a mixture of acoustic and electronic drums and electronically processed double bass (from longtime band mate Kris Funn). Impressive performance by drummer Corey Fonville—the first demonstration of the versatility he would show throughout the set—as well young flutist Elena Pinderhughes and the leader. Alto saxophonist Braxton Cook joined the band for the second tune, which had an electric Herbie Hancock Sextet feel (pianist Samora Pinderhughes moved to electric piano). Scott announced that they were playing music from the recent album Stretch Music (Ropeadope, 2015) as well as recently recorded music to be released early next year in time for the centennial of the first jazz recording. He is proud of this band, and with good reason: they were absolutely smoking.

Another rhythm loop began the next tune, followed by an all-acoustic modal tune, which went into a straight ahead swing feel with walking bass. There was even a round of trading solos (12s, if I was counting correctly: it was a fast tempo). Noting that this was a jazz festival, Scott called John Coltrane's "Equinox" next. The band really stretched out on it, jam session style. At its conclusion Scott went into lengthy band introductions—complete with stories about how they met, etc.—entertaining, but I had to run off to another show. I had very little familiarity with Scott's music before this, but it was a great show. He manages to combine hip-hop elements with the jazz tradition in an exciting, completely convincing way. He was especially complimentary about his pianist, promising to record his compositions in the future. Given what a powerful player he was that is definitely something to look forward to.

Every jazz fan has an opinion about trumpeter Wynton Marsalis, so I should probably share mine. I'm a great admirer of his technical skills on the trumpet, tend to find his composing capable but stiff, and have little use for his ideas about "conserving" jazz. I'm not a fan of the repertory orchestra approach generally, but I accept that it has a place. So I'd like to think that I approached the Jazz at Lincoln Center Orchestra with Wynton Marsalis featuring Wynton Marsalis concert with an open mind. I only caught part of their first set, which included Ted Nash's arrangement of the early Chick Corea classic "Windows," and two Duke Ellington compositions. The first was the infrequently played "Braggin' in Brass" from 1938. Marsalis mentioned that the Orchestra was founded in Ellington's spirit, with several alumni of Duke's orchestra, and that this piece is especially challenging for the trombone section. This was followed by the beautiful "Isfahan" from The Far East Suite, composed by Ellington and Billy Strayhorn in 1966.

Even just this small selection showed a broader stylistic range than I expected. Impeccably played (as expected) but with plenty of energy as well. As always Marsalis was a charming Master of Ceremonies, and he wore the "featuring" label very lightly. He was a member of the trumpet section: he made his announcements from there, and took no more solo time than any other orchestra member. I'm still not a fan, but I was impressed, and wished the evening's schedule had allowed me to stay for the second set.

Saxophonist Chris Potter brought a trio with him to Montreal. They began the concert with a cover of "Synchronicity" by The Police, followed by Potter's "Dr. Benway." Potter explained that he had been reading William Burroughs' novel Naked Lunch when he needed a title, so he used that character's name. He introduced bassist Joe Martin and drummer Marcus Gilmore, who proved to be very flexible playing partners. "Dream 3" (a working title) began with arco bass and soprano saxophone, then moved to a bass solo before the full band finally entered (Potter threw in an "Over The Rainbow" quote). That arrangement is a good example of the way the group made the most of the possibilities with only three instruments.

"Jeep's Blues" was a change of pace, followed by another untitled piece going by "Untitled (11)." Potter seems to have a lot of trouble with titles! This one has already been recorded, so a title was promised sometime before the release. The set ended with two covers. Thelonious Monk's "Ask Me Now" is a tune Potter associates with saxophonist Joe Henderson, who performed it frequently in a trio format. "Little Willie Weeps" is a tune associated with Charlie Parker, which Potter often performed as a sideman with trumpeter Red Rodney, who had been a Parker sideman. The group was called back for an encore, a latin tune I did not recognize (probably another Potter original). The saxophone trio is a demanding format, but this group made it look easy.