By MARK CORROTO
January 3, 2017
Sign in to view read count
The original marathoner, Pheidippides in 490 BC, is believed to have run from Marathon, where a battle was being fought, to Athens to inform an assembly that the Persians had been defeated. It certainly was quite the achievement, taking into account the sorry state of footwear at the time and lack of prepackaged gels and energy drinks. Admirers of saxophonist Ivo Perelman's music have also participated in a sort of marathon in 2016 owing to the fact that he released a total of eleven discs this past year. Unlike the marathoner Pheidippides who died after his race, modern ears should fare much better.

As Perelman has progressed, his music has been thoughtfully documented. There are also the fine discs on Not Two Records, Clean Feed, Cadence Jazz/CIMP, and Boxholder Records. Since 2010, with the exception of One (RareNoise Records, 2013) a session with Joe Morris and Balázs Pándi, all of his output has been on Leo Records. This certainly makes for a consistent product and a great way to follow his progress. 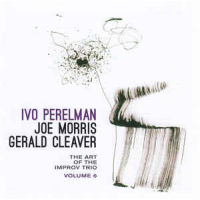 The regularity of his sessions and the stability of lineups also adds a certain equilibrium to the music. As mentioned at the top, he released eleven discs in 2016. There were also six in 2015, four in 2014, and six (delete "in") each in 2013 and 2012. His astounding total for the past six years is thirty-eight!

Each year Perelman's technique gets honed, refining and sharpening itself without losing that edginess heard in his earliest recordings. He has developed his technique to improvise in the highest register of his horn. An amazing feat in itself, but he also communicates and improvises with the players listed above, all masters of their own craft. Of special note is his separated-at-birth collaborator Matthew Shipp. Both musicians' careers have paralleled each other, each creating a distinctive language and each representing a beacon for jazz improvisation.

Highlights for this past year include his latest collaboration with pianist/vibraphonist Karl Berger who can be heard on two recording sessions.

Berger, probably best known as the founder, with Ornette Coleman, of the Creative Music Studio in Woodstock, NY has made a renaissance of sorts. He has of late, recorded with Kirk Knuffke, Aki Takase, and Alexander von Schlippenbach and his collaborations with Don Cherry are steadily being reissued. As with all his musical partners, Perelman's approach seems to connect on a synergistic level that combines for a much greater effect. The Hitchhiker finds Berger on vibraphone and The Art Of the Improv Trio, piano. Both recordings sustain an intimate air, but Berger's vibraphone work even more so. Perhaps it is the austere sound of two metal instruments (vibes and tenor) that causes the players to respect the placement of and the silence between notes. Adding Cleaver, who might be the ultimate colorist as a drummer, adds more metal (cymbals) and his kick-drum is a massage to the solar plexus.

Joe Morris can be heard on four releases in 2016. Two have him playing guitar, Blue (acoustic) and The Art Of the Improv Trio: Volume 5 (electric) and also, bass, Breaking Point and The Art Of the Improv Trio: Volume 6. As you might have guessed, the acoustic guitar elicits a quieter approach than the full quartet that also includes Mat Maneri and Cleaver. Listeners can debate among themselves whether they prefer Morris' guitar or bass work. While he has established a unique, idiosyncratic sound on electric guitar, of which a Rosetta stone is finally being revealed, his bass playing is more accessible, yet just as graphic. These four sessions present four different sides of Morris and just as significant, the versatility of Perelman's craft.

Absorbing Perelman's music requires an act of immersion. Play this music in your car or on a walk and allow it to shape you perception of the world. Spin the discs as the soundtrack to your day or evening and it integrates into your thoughts and speech patterns. It is almost as if the listener becomes a collaborator to this music.

The reference point for all of Perelman's work is pianist Matthew Shipp. They've recorded the duos The Art Of The Duet Volume One (2013), Complementary Colors (2015), Callas (2015), and Corpo (2016), where each player shares equally in the music making. Sometimes, it is as if they are of one mind. Indeed, they speak the same language, one that involves acrobatic flights of improvisation and inventive technique. Even when the saxophonist is not playing with Shipp, the music he creates has the pianist's mark. Or is it Perelman's fingerprints in Shipp's music? You decide. On Volume 3 The wildcard is Cleaver. His expressive nature has graced ensembles led by Craig Taborn, John Hébert, and Chris Lightcap, among many others. Here, he boosts the session into a five star category. The sound is extraordinary, each player alternately maintaining the flow and opening up their book of sound.

With just Perelman's recorded output of 2016 loaded into your mobile deivce, there is enough music to run two marathons.

Tracks: The Shadowy Path; The Well Of Memory; Twilight; Unspoken Feelings; The Hitchhiker; Pride And Prejudice; Extremely Loud While Incredibly Quiet; Engulfed In Flames; Zen And The Art Of Improvisation; The Sound Of Bliss; Well-Behaved Quarter Notes.

The Art Of the Improv Trio: Volume 1

The Art Of the Improv Trio: Volume 6

The Art Of the Improv Trio: Volume 3