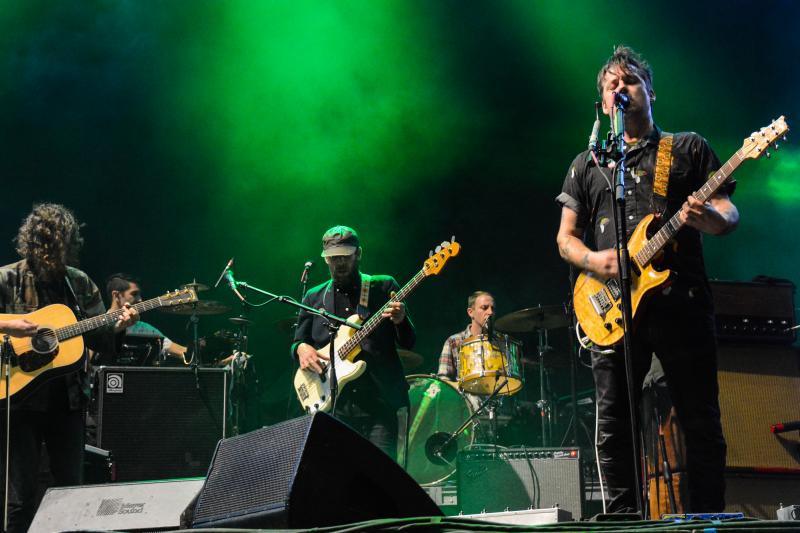 Each year the city of New Orleans melds its mythology, mysticism, religious practices and musical history with the traditions of Halloween when it hosts The Voodoo Music + Arts Experience. The three-day festival, formerly known as The Voodoo Music Experience, given the moniker of the Ritual by some folks, and most-often referred to as Voodoo or Voodoo Fest, is held in New Orleans' City Park. During the past sixteen years, the Ritual has hosted over 2,000 performers and approximately a million fans. The festival is always scheduled on the weekend closest to Halloween. Many times, Voodoo Fest actually encompasses the holiday. That was true for this year's festival as it was scheduled for Friday, October 30th through Sunday, November 1st. That was not to be as Mother Nature had a different agenda. A tornado watch encompassing New Orleans as well as surrounding areas of southeast Louisiana was announced Saturday morning. Though the tornado never touched down, the weather "occurrence" lasted through the afternoon. The rains which started with sporadic drizzles and light storms early on Saturday, ramped up with a late afternoon thunderstorm of almost epic proportions, forcing many festival-goers to seek shelter and miss some of the headliners while others who braved the elements became mud-people as City Park morphed into something of a swamp. Sunday was a complete and total wash-out. The heavy rainstorm lingered overnight and during the morning, forcing the festival's organizer, Live Nation, to cancel the entire day's festivities due to very unsafe conditions.

Because of its diverse artist roster (the musical line-up features performers from almost every genre of music imaginable: jazz, blues, rock, funk, fusion, prog-rock, jamband, hip-hop, pop, EDM, worldbeat and heavy metal), Voodoo is clearly the best yearly concert experience in New Orleans. While the festival's motto is "Worship the Music," it is more than just a musical celebration. It also features world class food, art and many interactive opportunities scattered throughout the City Park festival grounds.

The festival features numerous stages. The largest, the Altar, is the main stage. The Carnival Stage hosts a mélange of older and upcoming acts that fit into numerous different genres. The Le Plur Stage is home to most of the EDM acts, while the Flambeau Stage is home to many of the hot up-and-comers as well as established rock, pop, blues, country and jazz acts with large followings. Lastly, the Toyota Music Den is a small tent that is home to acoustic and intimate performances by acts who have played full sets on one of the main stages earlier in the day. Each stage features fantastic performances that leave the audience deliriously happy.

Flow Tribe: Local heroes Flow Tribe were fittingly chosen as the first act to grace the festival's main stage. Appearing on the Altar Stage on Friday at precisely 2:25pm (a strange start time, but one chosen to allow festival-goers an opportunity to make their way across the grounds to see the act of their choice), the members of Flow Tribe were dressed as pimps wearing bright neon pastel colored suits. The band announced itself with a simple, "What's up Voodoo Fest? Are you all ready to party New Orleans?!!" The crowd cheered and the funk was flowing.

The six piece band offered a high-energy musical gumbo of funk, jazz, reggae, rock, Latin, hip-hop and blues to an adoring audience. For the locals in the crowd it was party time with many audience members not only bopping and dancing to the grooves, but singing along with K.C. O'Rorke (vocals, trumpet), Chad Penot (bass, vocals), John Michael Early (harmonica, vocals, keyboard, washboard), Bryan Santos (guitar, timbales), Mario Palmisano (guitar) and Russel Olschner (drums). As its groove-based funky beats wafted across the festival grounds, Flow Tribe made new fans and friends as the faithful were joined by other revelers who quickly joined in the celebration.

The Joy Formidable: This Welsh band delivered a set of pure energy and clearly knows how to have fun. Appearing on the main stage (in this case the Altar stage) fairly early on the first day of a festival is usually a difficult slot—especially if the performer isn't a local act. In many cases, lots of folks haven't arrived yet. Those who have are milling about trying to get food or find friends.

None of that deterred the Joy Formidable. The trio demanded to be noticed by reeling off searing guitar solos augmented with heavy bass and thumping drums. The band played to its strengths. They rocked hard, loud and fast, foucusing on many of its more rowdy songs and the strategy worked. The crowd took notice and were slowly but surely drawn to watch Rhiannon "Ritzy" Bryan (lead vocals, guitar), bassist Rhydian Dafydd and drummer Matthew James Thomas kick some ass.

The set was highlighted by "The Greatest Light Is The Greatest Shade," "This Ladder is Ours," "Maw Maw Song," "Whirring" (with its explosive chorus and alternative arena rock sound) and the new tune "Passerby" which Bryan announced was "something that is not actually on the fucking album, but it's good for a laugh." The song owes a lot of its DNA to The Queens Of The Stone Age influence and is sure to be a hit if it makes the cut for the band's next CD.

Watch this band. If it gets the right breaks and has a little luck, the Joy Formidable will be huge.

Jessica Hernandez & The Deltas: Appearing on the Carnival stage in the late afternoon, Jessica Hernandez and the Deltas played a rocking set of soul and R&B that had its audience dancing and bopping to the beat.

Hernandez and her band brought their A-game—offering a high-energy set of fun Detroit-influenced soul-pop highlighted by the cover of Barry Mann's "Who Put The Bomp," "Sorry I Stole Your Man" and "Cry Cry Cry." Hernandez offered the funniest line of the day when she slyly introduced "Cry Cry Cry" with, "Do you mind if we play a slow one? After all, nothing's spookier than a love song."

Gerard Way and The Hormones: Former My Chemical Romance frontman, Gerard Way's set was devoted almost entirely to his 2014 solo CD Hesitant Alien (Reprise Records). It was the last performance of his 2015 tour. Opening with "The Bureau," Way and his band sounded great. He was a bit weary and it showed, but he also took the time to interact with the fans closest to the stage.

Way, who was dressed in a black pants, black jacket, black shirt and a bright red tie talked about his love for New Orleans. He stated, "I was here four years ago with My Chemical Romance. I've been looking forward to this show for so long..."

Highlights included: "Zero Zero," "Drugstore Perfume," "Brother" "Maya The Psychic" (a song about mental Illness), "Juarez" and "Millions." Though he didn't play a single My Chemical Romance song, even though fans near the stage repeatedly peppered him with requests, he did offer a cover of Jesus and Mary Chain's "Snakedriver." It was a nice cover that was done well, but it only served to leave the audience wanting something that they didn't get.

Metric: Metric delivered a catchy synth-pop set that was both high-energy and gimmicky. Always ones to become part of the spirit of an event, band members appeared wearing animal head masks while frontwoman Emily Haines was dressed as a very flashy and chic peacock.

Even after almost 20 years, Metric seems to never tire of what it does. The band's fans seem to feel the same way. Metric's performance left the fans wanting more, but in the best possible way.

Ruby Amanfu: Frank Turner & The Sleeping Souls cancelled at the last minute, as a number of band members had contracted cases of food poisoning. The Nashville-based Amanfu seized the opportunity and took his slightly later slot. It was a brilliant choice for Amanfu to be seen by more fans, but it led to confusion among the crowd that was milling about the Flambeau Stage waiting for her originally scheduled performance. No announcement was made when Amanfu didn't appear on the Flambeau Stage at 4pm. No announcement was made when she appeared on the same stage at 5:30pm in Turner's slot. Had there been an announcement, any announcement, voodoo-goers could have and would have adjusted their plans.

Those lucky enough to catch her performance received a pre-Halloween treat. Her smoldering R&B set featured tales of bad love affairs and heartbreak and was highlighted by a sultry cover of Kanye West's "Streetlights" from her 2015 CD Standing Still (Thirty Tigers/Rival & Co Records), "Love Out Loud" and "Bluff. She also treated fans to two additional out-of-the-ordinary covers: Memphis Minnie's "When My Man Comes Home" and "I Wonder" originally released by Detroit singer-songwriter Rodriguez (the man who was topic of the award-winning Searching For Sugarman documentary film).