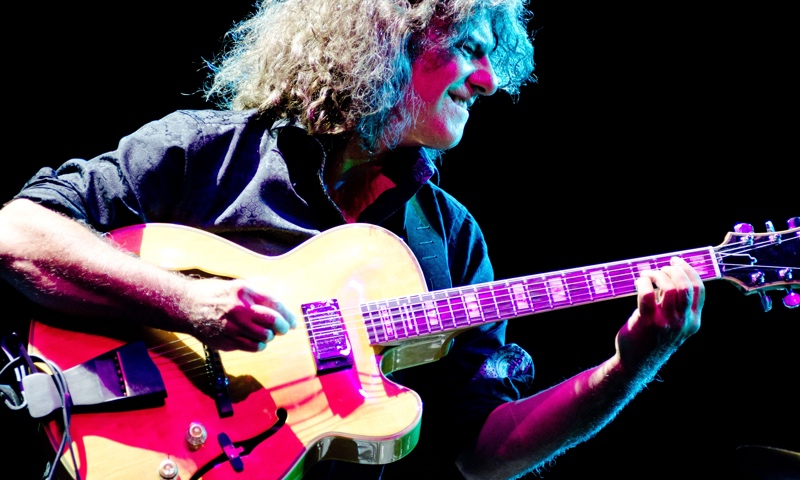 As the world's largest free jazz festival, Detroit's annual Labor Day offering provides a rewarding, but daunting task for anyone set to hunker down in the Motor City all Labor Day weekend. This year about 60 performances were in the offing spread over four stages during the course of the four-day event. It is obviously just not possible to experience it all. The sooner one wraps their head around that concept the better time they will have in accepting the consequences of such. This should serve as a caveat in understanding that the following is a reflection on the choices made by this reviewer and that complete coverage of a festival of this type is not logistically possible.

Let it be said that under the guidance of previous musical directors Frank Malfitano and Terri Pontremoli, there were even harder choices to make between more performances and overlapping sets. In his fourth year as current director, Chris Collins has done a better job at allowing for breathing space between sets. The problem now is that he has performances from similar genres sharing similar times on different stages. Malfitano and Pontremoli avoided this by mixing the styles among the stages, making those choices easier to make. Collins has a decidedly mainstream approach to his programming that does not allow for such a strategy.

It was interesting to notice all the different ways folks utilized in keeping their agendas clear, from highlighters to spreadsheets. How does one decide between Eddie Daniels and the Detroit Festival Orchestra on one stage and the Liberation Music Orchestra conducted by Carla Bley on another? Or, would you rather see Oliver Lake's quartet or the pairing of John Scofield and Joe Lovano? And what happens, as it did several times, when delays throw off the schedule of a given stage entirely? Who likes to make these kind of choices?

Now add to all of this the sheer logistics of getting from one stage to the other. Even with the soaring temperatures and full sun, Hart Plaza was packed each day, no doubt fostered by the wide appeal of festival artist-in-residence Pat Metheny. The guitarist's modus operandi was to play in a different setting on each of the four stages over the course of the weekend. Sounds like a great idea, but the duo set he shared with bassist Ron Carter housed at the space-constrained Pyramid Stage was a fire hazard in the making. People started camping out for a spot early on Sunday morning, so by the time of the pair's 5:15 set, the venue was crammed beyond capacity.

A further learning curve ensued with the first-time use of a wristband system for attendance at the after-hours jam sessions. Housed in the Volt Lounge at the Marriot Renaissance Center, the crowds are always healthy and the need for a change was understandable. Inexplicably, few knew about this system ahead of time and the 250 wristbands were dulled out each evening around 6:30, a time when most folks were somewhere on Hart Plaza taking in the festival performances.

Following a stodgy and pretentious salute to Benny Goodwin featuring Gordon Goodwin's Big Phat Band and a quartet of clarinet virtuosos, Friday's opening festivities really heated up with the first appearance of Metheny in a trio with bassist Scott Colley and drummer Antonio Sanchez. The unit brought new life to Metheny staples like "James" and "Lone Jack," the guitarist letting loose a barrage of Ornetteish runs on the former as he engaged in dialogue with Sanchez.

The crowd certainly understood the gravity of the moment when Detroit legend Kenny Garrett stepped on stage, the pair not having played together for some 20 years. Garrett's "Sing a Song of Songs" brought swells of applause as he and Metheny hunkered down for a true meeting of the minds. Even with a difference in styles and tastes, the pair met each other on an equal playing field that led to some especially incendiary exchanges. A rapturous "Are You Going With Me" provided the closing gambit on a particularly choice pairing of giants.

Saturday the area around the Waterfront Stage filled up quickly and the sun was baking, yet cooler minds prevailed via a tribute to the music of Brazil as offered by Anat Cohen and her quartet. While the spirit of Brazil was to be found in the frameworks of the pieces, the sound was pure Cohen. Aided by the vamp-heavy grooves of bassist Linda May Han Oh and the colorful drumming of Daniel Freedman, Cohen's filigreed clarinet lines revealed a refined insight that went beyond merely grafting her Jewish sensibilities to the samba.

A bit more cerebral was the approach offered by drummer Brian Blade and his Fellowship Band. Featuring pianist Jon Cowherd, bassist Chris Thomas, and the twin reeds of Myron Walden and Melvin Butler, Blade has clearly adopted the stance of his longtime employer Wayne Shorter. Brooding and angular melodies weave complex textures that are intricate and awe inspiring, but sometimes lacking in emotional depth and connection.

In his second appearance at the festival, Metheny would pair up with vibraphonist Gary Burton with whom he debuted way back in 1975. Bringing bandmates Colley and Sanchez along for the ride, Metheny and Burton wasted no time traveling down memory lane on a breezy set that included Chick Corea's "Sea Journey," Steve Swallow's "Falling Grace," and Carla Bley's "Olhos de Gato." These are pieces the two could perform in their sleep, yet there was a renewed spark of excitement in their shared explorations of this material that was palpable. As rewarding as the quartet performances would be, it was during the hushed quiet of two duets ("O Grande Amor" and "Summertime") that this pair's shared chemistry came to the fore, Metheny stepping into close proximity of Burton during both.

The Waterfront Stage seemed as good a place as any to start the schedule again on Sunday, being that the cool breeze coming off the lake seemed to help squelch the heat. Clarinetist and saxophonist Ken Peplowski dished up the kind of nostalgic jazz that is rarely heard from at this festival. The payoff came in spades, due in large part to the personality and joie de vivre of Peplowski himself and the fine support provided by Ehud Asherie, bassist Martin Wind and the effervescent Matt Wilson on drums.

Peplowski also knows how to pace a set and mixed in some neglected gems, like Billy Strayhorn's "Ballad for Very Tired and Very Sad Lotus Eaters" and Noel Coward's "I'll Follow My Secret Heart." An up and comer on the scene, Asheri impressed with some meaty stride passages on Fats Waller's "Willow Tree." Wilson played prominently in the mix, musically lending a fine calypso beat and solo to Ellington's "The Flaming Sword." He also played the foil to Peplowski's comical exchanges, the dapper drummer winning a bet with Ken as to who would take their jacket off first during the set.

For the next few hours, this reviewer tried to split himself between a piquant trio set from pianist Aaron Diehl and the aforementioned Carter/Metheny duo. The latter proved to be a failed attempt if I had hoped to actually see the pair, although if you got close enough to the Pyramid you could hear the two weave their threads to an awestruck crowd on standards such as "Freddie Freeloader," "A Child is Born" and "St. Thomas."

The rest of Sunday evening on the main stage at Campus Martius was some of the most sublime and exciting music of the entire weekend. Last year, Charlie Haden left this world at the age of 76. His Liberation Music Orchestra first debuted back in 1970 and over the years the bassist utilized it as a voice for some of his most dramatic music endeavors. The current configuration has been largely stable over the past decade and Haden's widow, Ruth Cameron, is now involved in keeping the ensemble alive.

One of the main arrangers for this group since its inception, Carla Bley was present at Campus Martius to hold down the fort and provide her own piano interjections. Fittingly, her husband, Steve Swallow, filled the big shoes left by Haden's departure and he did so marvelously. Although this twelve-piece group is stocked with star power, several soloists figured prominently in the mix. On Pat Metheny's "This Is Not America" tenor saxophonist Tony Malaby let loose a muscular and visceral statement that was simply jaw dropping. Equally revelatory were solo spots from trumpeter Michael Rodriguez on "Going Home" and "America, the Beautiful." With a burnished tone and spot on intonation, Rodriguez built the drama in a smoldering fashion, eventually breaking through at the climax of each statement with herculean runs. This is one talent to watch for in the future.

Although the polar opposite of the LMO's performance, bassist Richard Bona and his group Mandekan Cubano were just as soul satisfying with their ebullient Latin jams. A master of so many styles, Bona has hit the right combination with these guys, especially percussionist Luisito Quintero and pianist Osmany Paredes. Catchy melodies delivered by Bona, in his wordless vocal style, were supported by authentic clave beats and Paredes' son cubano grooves. His entertaining delivery brought everyone into the moment with plenty of folks on their feet for the last few numbers. Indeed, Bona lit up the night.

The hottest day of the weekend, Labor Day Monday brought with it a shorter list of performances, although the main amphitheater was host to a bristling set from vocalist Carmen Lundy and a refined offing from the Ron Carter trio featuring Russell Malone. Wrapping up the festival, Metheny would deliver the North American premier of his piece "Hommage a Eberhard Weber." With audiovisual elements and the Detroit Jazz Festival Orchestra directed by Alan Broadbent figuring prominently in the mix, the bravura undertaking was a fine way for Metheny to come full circle with his time spent as artist in residence. He is without peer in his efforts to present himself at a jazz festival in so many different and flattering lights.