2014 Voodoo Music and Arts Experience: The Local Heroes & The Up-And-Coming Stars of Tomorrow 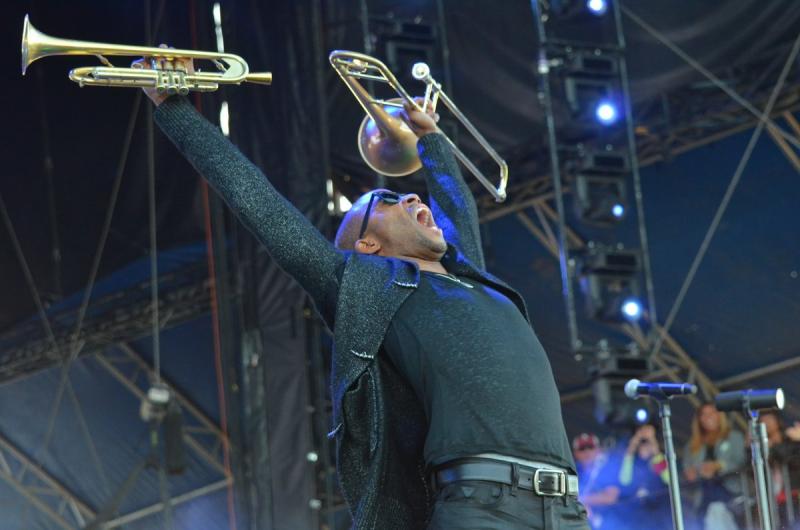 In 1974, after seeing a performance at the Harvard Square Theater, Jon Landau once wrote, "I saw rock and roll future, and its name is Bruce Springsteen. And on a night when I needed to feel young, he made me feel like I was hearing music for the very first time." What a bold, prophetic and accurate statement. Now, forty years later a similar statement could be made about Trombone Shorty (Troy Andrews). Trombone Shorty is the future of musical fusion. He mixes elements of all musical genres.

His 2014 Voodoo performance on the Ritual Stage on Sunday, November 2, was a rocking mélange of pop, blues, R&B, jazz, funk, brass, hip-hop and good old-fashioned rock 'n' roll. According to his website, Shorty calls his style "SupaFunkRock." As Landau stated about Springsteen so long ago, Shorty makes the listener feel like he or she is "hearing music for the very first time." Quite a heady statement. It is, however, more than that. Talent courses through his veins and the veins of his family members. His grandfather is the late Jessie "Ooh-Poo-Pah-Doo" Hill. His brother is trumpeter James "Satchmo of the Ghetto" Andrews. His cousins are trombonist/vocalist Glen David Andrews and the Rebirth Brass Band's Derrick Tabb. That's quite the pedigree. DNA is one thing, but individual talent is quite another. Shorty is an amazing player and singer. As a performer he is unparalleled. His vitality, energy and charisma is infectious.

His Voodoo performance and that of his band, Orleans Avenue, was astonishing—even for those familiar with the New Orleans legend. It was a musical onslaught. Shorty played trombone and trumpet, danced across the stage and sang. A quadruple threat, Shorty and his band were clearly "in the zone" and enjoying the performance just as much as the audience. The band played flawlessly. Highlights of the tour-de-force performance included a number of energetic and lively instrumentals, "The Craziest Things," the cover of Green Day's "Brain Stew" and "Fire and Brimstone." Trombone Shorty has a presence about him. He is a rockstar, though he doesn't act like one. And, he is humble. His talent outshines his unassuming attitude. He truly is the future of fusion.

Following Trombone Shorty, the festival's headliners Foo Fighters took the Ritual stage. Introduced by former New Orleans Saint safety and ALS sufferer Steve Gleason (who had introduced the 2013 festival headliners Pearl Jam), Foo Fighters performance was lengthy and legendary. After the band opened with "All Of My Life," lead singer Dave Grohl interspersed the band's hits-filled performance with tales about his travels through New Orleans and his love of the city.

He told a story about an encounter he had earlier in the day. He said, "You never take a day off before you play in New Orleans because you go out and have too much fun, and you have to work in the evening...I was walking through the French Quarter about three hours ago. I walked into a bar and these three old ladies asked me, 'Will you do a mind eraser with us?' I said 'No' and the whole bar booed. So I did it, then I walked in here tonight feeling just right." He told also told another story about shopping at Rite Aid for the pants that drummer Taylor Hawkins was wearing and proudly showed off to the audience. He also asked, "Ever see a Foo Fighters show? You know, we keep playing until they kick us off the stage. So tonight we're going to play some new songs and some old songs and play until they make us stop." And they did.

Highlights of Foo Fighters' set included: "This Is A Call," "My Hero," "Ain't Talkin' 'bout Love" (a cover of the Van Halen rocker), "Something From Nothing," a cover of Tom Petty's "Breakdown," Queen's "Under Pressure," and the closing song "Everlong." The evening's highlight was when Grohl brought Trombone Shorty out on stage with him to perform "This Is a Call." The incredible performance, which featured a dynamic trombone solo during an extended instrumental interlude, was so electrifying that people were commenting that the hair on their arms was tingling.

The sixteenth Voodoo Music and Arts Experience definitely closed on a high note. The festival (overall) was one to remember. This version of Voodoo (as evidenced by Trombone Shorty's breathtaking performances) was all about the local and up-and-coming acts. The headliners and bigger name acts including: Foo Fighters, Outkast, Arctic Monkeys, Slayer (who, as expected, were loud, fast and out of control), Thirty Seconds To Mars (highlighted by the covers of AC/DC's "Back in Black" and Metallica's "Sad But True"), the Melvins, City and Colour (who delivered a killer set from the Carnival stage on Saturday evening), Zedd and Skrillex—all delivered strong sets as expected. But, in addition to Trombone Shorty, it was the performances by acts like AWOLNATION, Royal Teeth, Flow Tribe, Manchester Orchestra, the Revivalists, Wild Feathers, Rise Against, Benjamin Booker, Rebirth Brass Band, the Soul Rebels, Pretty Lights, Dirty Bourbon River Show, Bonerama, Peelander Z, Honey Island Swamp Band, John Butler Trio, Gogol Bordello, Big Freedia, Sturgill Simpson, Lindsay Lowend, Twenty One Pilots, Bleachers, Barcelona, Drew Holcomb & The Neighbors, GIVERS and Crass Mammoth that defined the festival.

Sturgill Simpson is a rising outlaw country star. Some even call him the savior of country music. His early in the day performance on the Carnival Stage on Friday gave some creedence to that point. In reality he is a throwback to the originals outlaws of the movement that bears that name. His music isn't slick like what passes for country pop like much of what currently gets airplay on terrestrial radio. He is often compared to Waylon Jennings—both vocally and stylistically. That's a pretty heady comparison. He and his twangy four piece combo even covered Jennings' "Waymore Blues" during his set. As one of the only true Americana acts at the festival it was also a pleasure to hear his cover of Lefty Frizzel's "I Never Go Around Mirrors. His vocals along with guitar work of Laur Joamets, made Simpson's performance stand out. Known as an existential thinker, prior to playing "Turtles" Simpson even told a story about how the song is a peyote fantasy based off of a joke about the universe being balanced on an infinite number of turtles. Another highlight of his set was the medley of The Osborne Brothers' "Listening To The Rain" morphing into T. Rex's "Bang A Gong."

For the uninitiated, Bonerama is a funky rock, soul, reggae, fusion, pop, jazz, brass, blues band from New Orleans formed in 1998 by trombone players Mark Mullins and Craig Klein. Along with Greg Hicks (also on trombone), Mullins and Klein's band is one of a kind. The group's three trombone attack backed by electric guitar, bass, drums and, on this day, tuba give a different edge and feeling to rock 'n' roll. Not only does it work, but it gets the audience on its feet and dancing. The members of Bonerama arrived on the Flambeau Stage dressed in costume. Craig Klein stepped forward and announced, "Hey! How're y'all doing? It's a beautiful day in New Orleans, LA. We're called Bonerama. You're spending the day with Bonerama!" The crowd which (at the early hour) was comprised mostly of New Orleans locals shrieked its approval, sang along with the band, pantomimed playing trombone and danced until it was exhausted. Highlights included: "Let The Four Winds Blow," a Bonerama-ized version of the traditional Mardi Gras Indian chant/song "Indian Red," the brass band cover of Black Sabbath's "War Pigs," "Shake your Rugalator" and the cover of Edgar Winter's "Frankenstein."

Another local and home-grown band, Royal Teeth arrived on the Ritual stage dressed in Halloween costumes and hats. The New Orleans indie pop group is comprised of guitarist Gary Larsen, singer Nora Patterson, guitarist Thomas Onebane, bassist Joshua Wells, and drummer Josh Hefner. In 2013, the band played one of the festival's smaller stages, By 2014, as the band's popularity had increased, they "graduated" to the main stage. The Ritual stage. The Royal Teeth performance from the big stage did not disappoint its fans. The group played an energetic eleven song set that was highlighted by "Hold Me," the cover of Pat Benatar's "Love Is A Battlefield' (on which Patterson shined), a superb unnamed new song that the band stated was a work in-progress and its most well-known song "Wild."

Twenty One Pilots hails from Columbus, Ohio. The indie pop/rap rock/indietronic duo consists of Tyler Joseph and Josh Dun. Prior to signing with Fueled by Ramen Records in 2012, Joseph and Dun released two independent albums, Twenty One Pilots in 2009 and Regional at Best in 2011. Twenty One Pilots released its major label debut Vessel on Fueled by Ramen in 2013. Dressed in black with their faces covered Joseph and Dun appeared on the Ritual Stage and opened with "Guns for Hands." During the set the guys both donned numerous outfits and surfed the crowd. Highlights included the ukulele renditions of Beyonce's "Drunk in Love" and Elvis' "Can't Help Falling in Love," "Addict With A Pen," "Holding On To You" and "Car Radio."

As the sun began to set New York City-based Bleachers graced the Carnival Stage. Led by Jack Antonoff, the band's performance was a modern-day version of what can only be described as a "wall of sound." Featuring tons of harmony, happy, upbeat and vital songs, Bleachers should be getting the same amount of airplay that the similarly influenced and sounding Youngblood Hawke and AWOLNATION are receiving. Highlights of its nine song set included: "Wake Me," "Rollercoaster," "You're Still A Mystery," the cover of the Cranberries' "Dreams" (which was announced as being "for those born in the '90s) and the band's final number "I Wanna Get Better" (which was played following a costume change). The band members momentarily left the stage only to race back dressed in matching Little Orphan Annie outfits. It was quite a spectacle and an amazing performance!

Politically and socially active (they support Amnesty International, PETA, straight edge and vegetarian causes) Chicago punk rockers Rise Against's ritual stage performance was nothing less than spectacular. Lead singer Tim McGrath quipped that he'd never seen so many banana costumes and that the band should consider selling banana merchandise, he also got the crowd into his band's performance by asking if there was a punk scene in New Orleans and by getting the audience to react by asking, "Can you scream?" Naturally, the crowd members obliged. Highlights included "I Don't Want to Be Here anymore (from the 2014 DGC/Interscope Records release The Black Market), "Give It All," "Help I Son The Way," "Audience of One," "Like the Angel" and "Savior."

Thirty-five years into its career, Fishbone is still bring an amazing and insane fusion of alternative, ska, punk rock, funk, hard rock and soul mixed together with a very distinctive and off-kilter sense of humor to every performance. As darkness began to descent on the first night of Voodoo, Fishbone on the Flambeau stage delivered a set of total zaniness that carried over to its set later that evening at the Joy Theater in Downtown New Orleans.