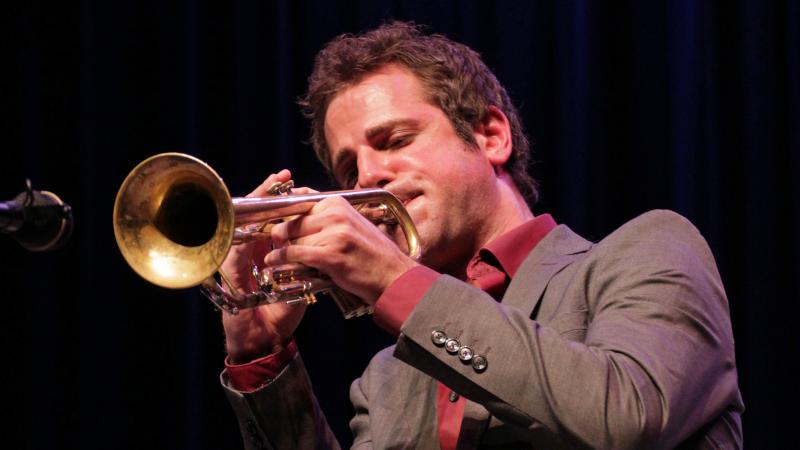 By MATT MARSHALL
May 8, 2013
Sign in to view read count
34th Annual Tri-C JazzFest Cleveland
Cleveland, OH
April 19-April 27, 2013
There was a determined effort by Tri-C JazzFest Managing Director Terri Pontremoli to give this year's event more of a festival atmosphere than it has perhaps enjoyed in years past. For starters, many of the outlying venues, such as the East Cleveland library, a regular festival haunt, were scrapped in order to concentrate events downtown, with most concerts staged either in the grand theaters of Playhouse Square or on the Tri-C campus. Additionally, the first and second Saturday schedules (a third, one-show Saturday on May 4 was oddly set off from the rest of the festival by a week) were programmed to allow festival goers the opportunity to attend three shows in succession without leaving the confines of the Playhouse Square theater complex. Filler events—Q&As with artists, concerts by local bands —were also set up in a theater lobby to keep attendees engaged in between shows. These changes did add something of a new atmosphere, and certainly added convenience for those attending multiple shows, but it still seemed like people were coming out for individual shows and leaving. But maybe ticket sales will refute that observation.

Something that didn't change was the diversity of acts; the eclectic mix, as always, tried to cater to every niche of the jazz and jazz-like listening community of Greater Cleveland. Kicking off with a broadly appealing Friday night show by New Orleanians (and, apparently then, de facto jazzmen) singer Aaron Neville and pianist Dr. John, the festival went on to seek youth (pianist Robert Glasper), adult contemporaries (singers Natalie Cole and Michael Feinstein), traditionalists (saxophonists Kenny Garrett and Javon Jackson), smoothers (keyboardist Brian Simpson's Smooth Jazz All-Stars) and many others who represented varying degrees of musical experimentation (pianist Orrin Evans, clarinetist Anat Cohen and guitarists Bill Frisell and Lionel Loueke). And, of course, there was no skimping on homegrown flavors, with big shows by saxophonist Joe Lovano, whose set featured a cavalcade of local artists, trumpeter Dominick Farinacci, who introduced young phenom singer Cecile McLorin Salvant to the Cleveland market, and the festival's house band TCJF SoundWorks, which teamed with Jackson to pay tribute to the late saxophonist Dexter Gordon.

That first stacked Saturday kicked off with the Robert Glasper Experiment. Taking the stage after a short technical delay (the amiable Glasper seems always to face some kind of interference when performing in this town, be it from the sound system, the building, a clueless, noisy audience ...) with an altered lineup that retained only saxophonist/vocoderist Casey Benjamin from the Grammy Award-winning Black Radio (Blue Note, 2012), Glasper's group chugged out sounds at once futuristic and nostalgic. Without the aid of the R&B vocal talent that graces the record, singing duties fell to Benjamin, whose vocoder rendered quickly passing lyrics unintelligible, but gave a nice, outer-spaceway warble to refrains. 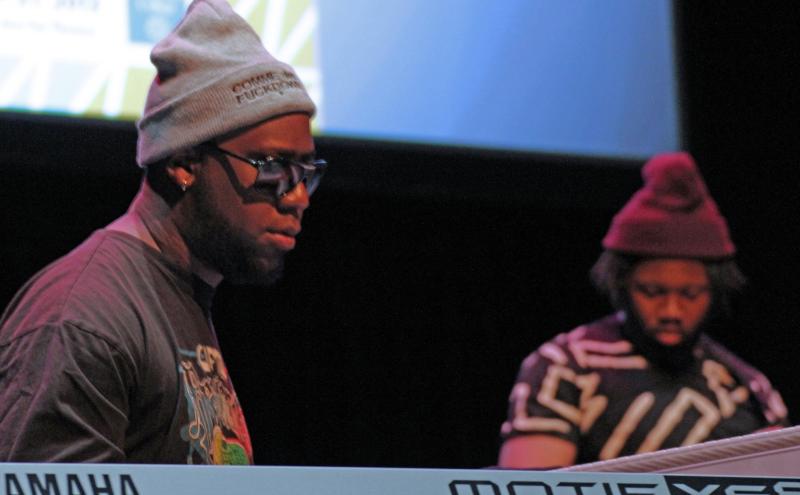 With the altered words reverberating over the steady, funky beat laid down by drummer Mark Colenburg and bassist Burniss Travis, and Glasper's rising and falling electric sprinkles, an undulating pulse was broadcast to the room, lifting some from their seats to flex in commiserate boogie. But after a few numbers, and despite some interesting interludes from Glasper and Benjamin's occasional shift to saxophone, a sameness took over the music: there was little difference between the vocodered beats carrying "The Consequences of Jealousy" and "Smells Like Teen Spirit." Still, the early Saturday afternoon crowd seemed to dig it and confirmed its affirmation by gamely, if falteringly, singing along during the encore—a cover of Floetry's "Say Yes."

There was a more partisan reaction to Orrin Evans' set a few nights later, unless the front exits of the Tri-C Auditorium simply revealed departures more readily than the Ohio Theatre that hosted Glasper. The audience sent vocal affirmations reporting through the air, with the spent powder settling on the heads of those filing out after each number. Strange. Not, surely, a straight-ahead player, Evans also is no wild experimenter. So the love-it/hate-it response he garnered on this night was odd—and unfortunate, since this trio's performance was the most engrossing of the festival.

Sticking largely to tunes from 2012's Flip the Script (Posi-Tone), Evans and his mates—drummer Donald Edwards and bassist Ben Wolfe—unleashed strong, exploratory music. And maybe the thundering drum assaults, blown into and left to expire in open spaces, or the light pianistic musings that changed course—after Evan leaned back on his bench to consider—to storm down a new path with a new plea, unnerved some. Their loss. 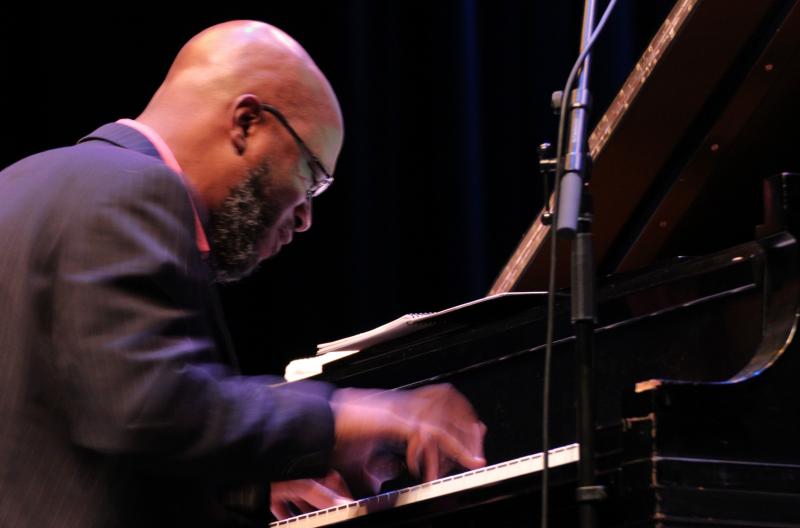 Through "Appointment in Milano," "Big Small" (a standout that opened on Wolfe's deep, thick tone, moved into piano-drum fury then to more avant terrors before finishing on single notes poked from the piano with an index finger), the anxiously melancholic "The Answer," the cinematic "When" (fed by Edwards' mallets and twisting its way through an emphatic, but never-inevitable course), and "Blessed One the Eternal Truth"—a praise song lifted, through Evans' voice, in a manner that recalled Al Hibbler if a good deal less steady and attached to key, crooned over sparse piano and brushed drums with genuine feeling—the set was one of constant musical renewal.

While exploratory, Anat Cohen's set two nights later—played in the same Tri-C Auditorium along with Israel's Rimon School Jazz Ensemble, which featured the accomplished novelty of Tali Rubinstein on recorder and the fine, rhythmic complexity of Yogev Gabay on drums—wasn't nearly as tight. But Cohen snaked admirably through the thumping mix of funk, blues and Israeli folk music—an invigorating set of music composed, save for the closer, "Hello Dolly," entirely by the students.

Conversely, Frisell's Beautiful Dreamers set, on the second Saturday, April 27, weaved a mood-drenched tapestry, strung from American musical thread. Along with violist Eyvind Kang and drummer Rudy Royston, the guitarist fashioned a haunting stream that fed through "Hard Times," "Lush Life," "Misterioso" and "Nobody's Fault but Mine," the final number featuring a viola that morphed into mandolin and blues guitar under Kang's expert fingers. The group then shifted to a three-song tribute to drummer Paul Motian: "Dance," "Abacus," and "It Should've Happened a Long Time Ago," the latter bringing Joe Lovano out from the wings in an unexpected reunion (to Frisell's telling) of Motian's one-time saxophonist and guitarist.

Lovano stuck around for a go at "Hot House" (a tune the saxophonist would call again a few hours later in his own set), and then departed as the trio closed with "Old Man River," a sense of the tragic and the spooky caught up in Frisell's melodic loops, and the tune automatically causing clips from the movie, The Great Flood (to which Frisell supplied the soundtrack), to replay through the heads of any audience member lucky enough to have caught the flick a few weeks earlier at the Cleveland International Film Festival. 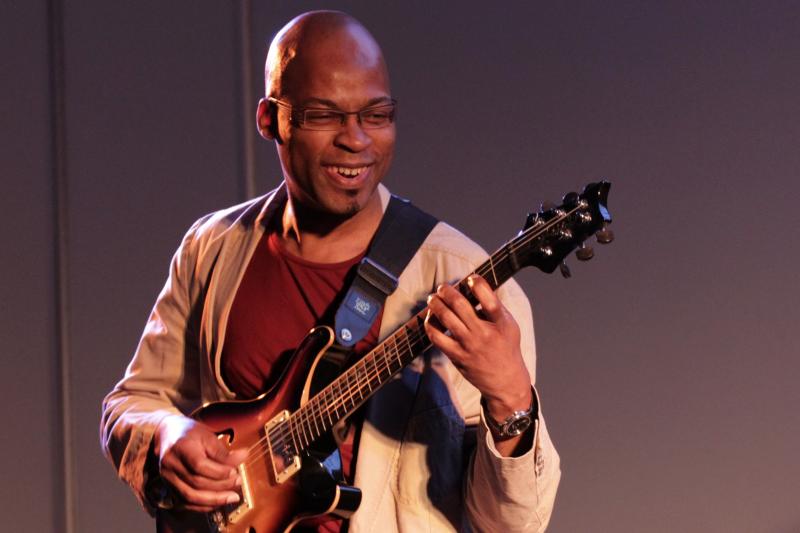 Loueke's show, one of two festival concerts staged east of downtown—this, at the Museum of Contemporary Art's new uptown digs; the other the Gordon tribute held at Nighttown in Cleveland Heights—brought surprise after surprise. Playing only material from his latest release, Heritage (Blue Note, 2012), but in trio with bassist Michael Olatuja and drummer John Davis, and thus working without the keyboard services of album co- producer Glasper, Loueke was free to fill a lot more space with his diverse guitar talents.

Over driving, rock-steady beats, Loueke employed blistering finger work and well-placed pedal effects to push the blues into the 22nd century, accelerating his lines at one point from loose, John Lee Hooker-like accompaniment to the high-pitched whirl of tape playing in fast-forward. There was a single, vibrating note, as if spun from a finger tracing the rim of a glass, and, elsewhere, electronic scramble and crackling alarm dissonance. All this mixed in easy communion with sweet, jumping African melodies. On "Ifê," Loueke applied an echo effect to his singing, giving it the force of choir.

Kenny Garrett's quintet turned in a powerfully memorable set, taking the Ohio Theatre stage after Glasper on the first Saturday. Playing five numbers from Seeds From the Underground (Mack Avenue, 2012) plus the crowd-pleasing closer, "Happy People," the saxophonist adopted the tone and posture of one conducting a ceremony (or revival, perhaps), as he paid tribute to his forbearers and his native Detroit. Whether on alto or soprano sax, his playing seemed a natural vocal extension of himself, and his band supplied the requisite tumult or swing. On a few occasions, Garrett motioned to the crowd to continue its applause as he kept the music going, but, otherwise, the performance came without artifice.

Javon Jackson, who played the following night at the Cleveland Heights jazz club, Nighttown, was likewise sincere in his playing, but offered few surprises in two straight-ahead sets with TCJF SoundWorks that featured tunes composed or associated with Dexter Gordon. Pianist Chip Stephens was, perhaps, the most intriguing player of the evening, moving from bouncing Art Tatum-isms to crashing, angular approaches as the tune dictated. Saxophonist Howie Smith cut distinctive, howling, laughing lines on the opening numbers of each set (before Jackson came on), offering up the most notable composition/arrangement of the night with a piece he called "It's Happening Again" (culled from the same changes as Gordon's "Fried Bananas," which itself borrowed from "It Could Happen To You"), a duet that pitted Smith's alto lines in harmonic counterpoint—and then as melodic paths twisting—with lines from trombonist Chris Anderson. 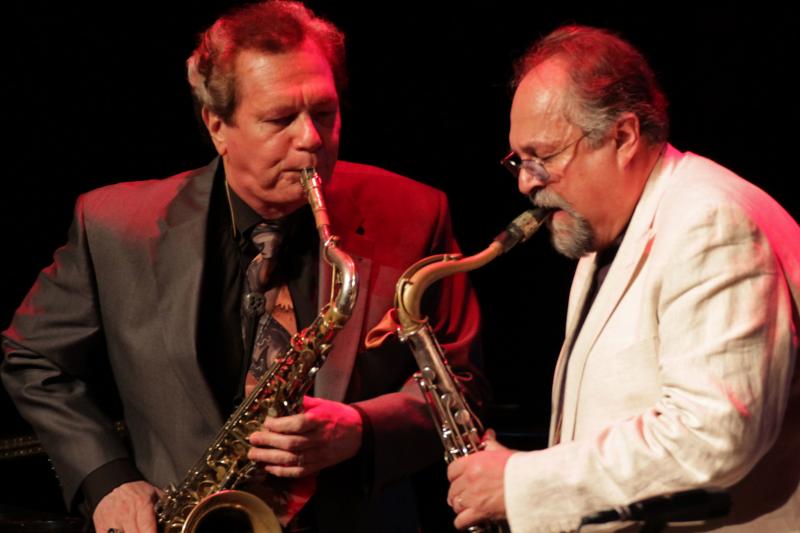 The festival always places a strong emphasis on local talent and on bringing back native Clevelanders who have made a strong national and international impact. Lovano, one of the greatest jazzers ever to come out of Cleveland, regularly fills a festival slot, as does Farinacci, a graduate of the Tri-C jazz program. Both used their stage time this year to highlight others. In a show billed as a celebration of his 60th birthday (which actually rolled around last December), Lovano appropriately made the event a family and friends affair, much as he did in an appearance on the eve of his 58th birthday at Nighttown.