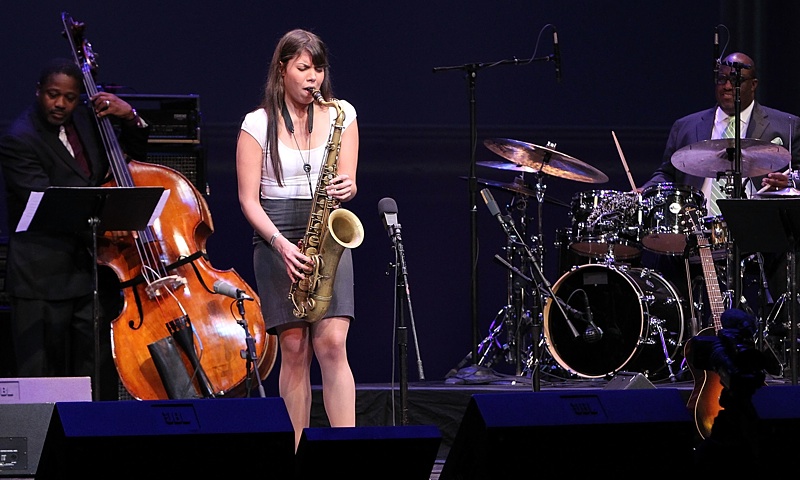 By FRANZ A. MATZNER
October 9, 2013
Sign in to view read count
The saxophone is the most iconic of jazz instruments. Its image is all that is needed to invoke the music's essence, its history intimately entangled with the cultural arc of American music and urban culture. Its masters are the most recognized outside jazz circles and its sound most closely identified with the art form. To many, jazz is defined by the sax and the sax defined by jazz.

For that reason, it was fitting that this year's Thelonious Monk Institute International Jazz Saxophone Competition divested itself of much of its hallmark pageantry, opting instead for a paired back presentation that put the saxophone, its players, and the music front and center. Speeches were truncated and more organic, the production less lavish, the itinerary foreshortened. The atmosphere transformed from elaborate celebration to intimate recognition and soulful introspection.

And the music—both the three saxophone finalists and the gala concert to follow—reflected this change and seemed, in some ways, better served for it. After all, the saxophone is most regaled for its reflection of the human voice, for its ability to shape moods, to channel emotions, and to conjure from thin air evocations of our innermost depths.

In keeping with the Institute's important focus on education, the evening opened with a sprightly rendition of "ETA" by a collection of student players before turning to the heart of each year's Monk Institute concert, the competition. Held annually at the Kennedy Center for the Performing Arts the competition draws contestants from across the globe to vie for the prestigious and lucrative first prize scholarship and Concord Music Group record deal.

Winnowed to three finalists, each of whom played two selections with accompaniment by Carl Allen (drums), Reginald J Thomas (piano) and, Rodney Whitaker (bass), this year's presentations were defined by a judicious constraint that substituted artful readings and subtlety for technical pyrotechnics and genre-challenging explorations. All three finalists strove for soul over sonics, grounding their work with historical touchstones and orienting their performances inward, thus reflecting a growing tendency of modern jazz towards recontextualizing versus decontextualizing.

Playing on alto, Harlem-born Godwin Louis performed a powerfully personal interpretation of Hoagy Carmichael's "Skylark." Displaying an unusually patient pace of development and a cunning use of dynamics, Godwin crafted a hypnotic mood both engulfing and enticing. Unfortunately, Godwin stumbled on his second tune, the original composition, "Our Father," which though intriguing in design, failed to captivate.

Last to perform was Chilean-born and New York-based Melissa Aldana. Throughout both Jimmy Van Heusen's "I Thought About You" and her original composition "Free Fall" Aldana consistently impressed with her deep, sonorous tenor and unpredictable development. Equally grounded in tradition and reflective of the night's minimalism as the previous contestants, Aldana's approach was less codified and, though extremely subtle, more adventurous across both her selections.

Ultimately, her exceptionally personal voice and expressive control established her as the first female instrumentalist to secure first place in the Institute's history. The significance of passing on the saxophone torch to a woman pleased judge Jane Ira Bloom whose own career has been defined by pushing the creative envelope. Bloom explained Aldana's victory stating, "The general impression of the judges was that Melissa has an original voice. She had really absorbed a great deal of information that many of the other performers had from the past, but what particularly struck me was how she used it to make a melodic, rhythmic, and harmonic vocabulary that was hers. We are all artists and I think that is what surprised our ears...She was expressing her feeling for old and new." 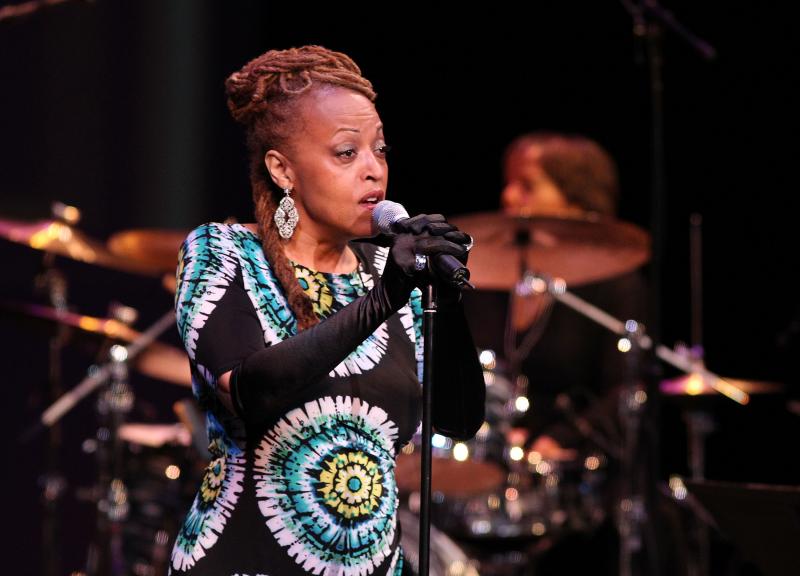 In 2007, the Institute introduced its Blues and Jazz curriculum with an extended educational tour of Mississippi public schools. Since then, the Institute has been expanding its focus on the blues to highlight the music's history and relationship with jazz.

To underscore this growing attribute of the Institute's extensive educational programing, Cassandra Wilson joined blues guitar veteran Robben Ford to perform Charlie Paton's "Saddle My Pony." Wilson coyly flipped the gender roles of the original and extracted every ounce of innuendo from the classic tune, while Ford accompanied her powerful singing with appropriately gritty guitar work. Ford then assumed the spotlight for an electric-blues romp that elevated the concert hall's energy level and underscored the blues' many manifestations and influences.

No celebration of the saxophone would be complete without mention of Wayne Shorter. The Institute took full advantage of his 80th birthday to honor his enormous contributions to jazz and to shine a much deserved spotlight on his long-standing involvement with the organization as an educator. Shorter received the Institute's rarely presented Lifetime Achievement Award, bestowed only one other time to Quincy Jones in 1996. Perhaps more meaningfully, Shorter was saluted by his friend and colleague, Herbie Hancock, who delivered a touchingly personal and poetic speech describing Shorter's brilliant career and enigmatic persona. The best honor, however, was the tour of Shorter's musical history presented by an impressive roster of rotating guest artists, including, Herbie Hancock, John Patitucci, Gerald Clayton, Kurt Elling, Roy Hargrove, Jimmy Heath, Branford Marsalis, Marcus Miller, T.S. Monk and more. 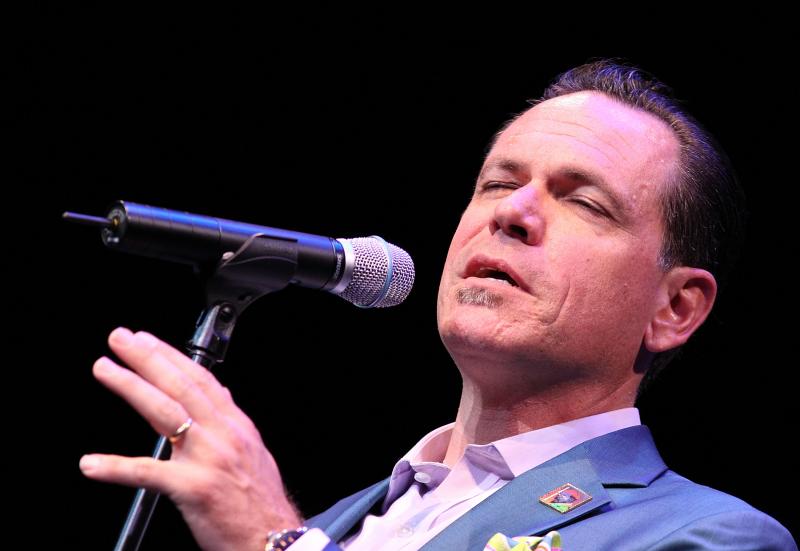 A septet of Shorter's own students performed a smooth take on "One by One," with Diego Urbano's vibe playing standing out in particular. This was followed by a combination of "Black Nile" and "Dolores Dream." On the later, Kurt Elling joined to deliver his patented ultra-hip, stylized take and provided a dose of humor to the proceedings, while the band's rendition of "Black Nile" highlighted the continued fertility of Shorter's famous Blue Note solo recordings. "Fall" and "Footprints" were chosen to document Shorter's Miles Davis Quintet period and his contribution to the seminal group. Here the assembled performers once again used the two pieces to simultaneously depict the longevity of these works and the vision of Shorter as a player and composer. Shifting gears, the next performance recognized Shorter's path breaking forays into fusion with the group Weather Report. To do so, John Beasley, Danilo Pérez, Marcus Miller, and the vocalists Take 6 broke out the electric instruments for a rendition of "Palladium" decked out in full Seventies funk regalia. 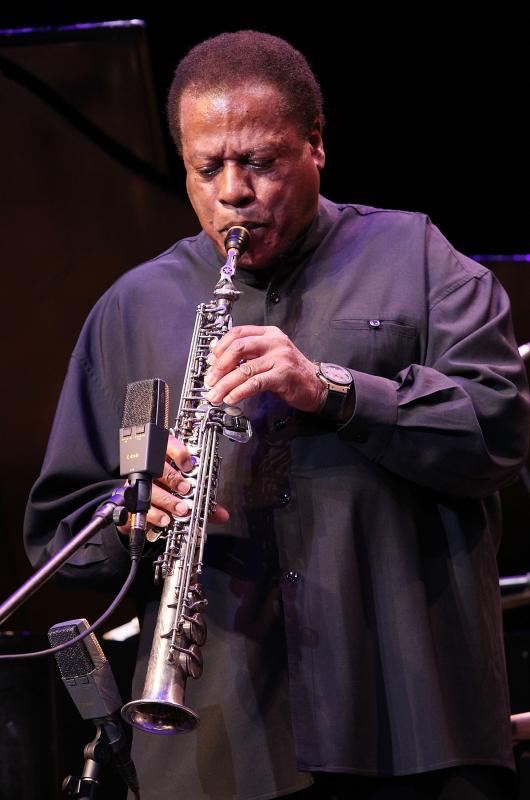 Appropriately Shorter then assumed center stage to lead his current quartet in a stellar performance of "Over Shadow Hill Way." It could not go unnoticed that Shorter's playing—even on only a single tune—instantly soared, carrying the audience into the stratospheres of our emotional and philosophical being and made a fitting conclusion to the night's celebration of his six-decade career as a restless iconoclast and perpetual seeker.

Only a month prior to the Monk Competition composer, performer, and producer George Duke passed away. A frequent partner with and staunch supporter of the Thelonious Monk Institute, his loss was clearly acutely felt by the presenters and performers as they incorporated into the night's concert a commemoration of Duke's accomplishments across a spectrum of genres and contexts.

Accompanied by a slideshow that revealed the impressive scope of Duke's collaborations—ranging from Billy Taylor to B.B. King to Bono—vocalist Ledisi performed "You Never Know" from Duke's final album DreamWeaver (Heads Up, 2013) and the a cappella group Take 6 delivered a rendition of "Fly Away," the occasional flaws of which made the tribute all the more endearing even as it reflected Duke's irrepressible positivity.

The 2013 Thelonious Monk Saxophone Competition was a refreshing affair in almost every sense. The Institute furnished its top prize to a female instrumentalist for the first time. The winner, Melissa Aldana, exemplified the personal expressiveness associated with jazz's signature instrument and the concert portion of the evening paid homage to one of the music's most significant composers, performers, and thinkers. The relative simplicity of the night's presentation only added to the sense of camaraderie and allowed the music to dominate, illuminating both the historic arc the night's many performances documented and the future contours implied by the competitions rising talents.