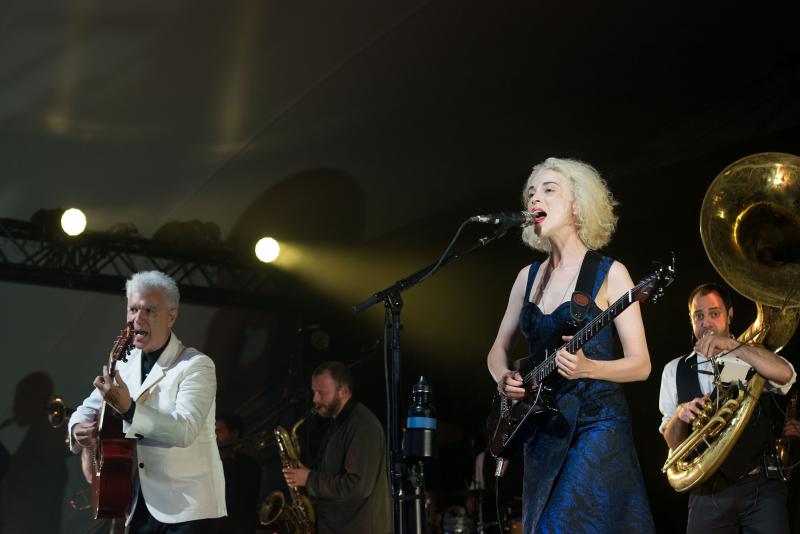 By JOHN KELMAN
July 1, 2013
Sign in to view read count
TD Ottawa Jazz Festival
Ottawa, Canada
June 20-July 1, 2013
Having made the decision, in 2012, to broaden its stylistic purview to include not only music on the periphery of jazz, but artists with no real connection to the founding raison d'être of the festival, the 2013 TD Ottawa Jazz Festival continued to bring extracurricular music to its main stage in Confederation Park, looking to both bolster its bottom line and bring a younger demographic to an event now in its 33rd year. While controversy continues to exist about whether or not a jazz festival can be called a jazz festival if it's anything but pure—a subject covered in the 2012 AAJ article, When is a Jazz Festival (not) a Jazz Festival?—there's still no doubt that the TD Ottawa Jazz Festival is a jazz festival. There may be acts like ex-Talking Heads singer David Byrne and his project with St. Vincent and even (gulp!) the Doobie Brothers (more about that in a moment), but during each and every day of the festival's 12-day run, there's so much jazz going on at venues like the National Arts Centre's Fourth Stage and Studio, Dominion-Chalmers Church and the OLG stage—a party tent located across the street from Confederation Park at Festival Plaza, which hosts late evening shows largely aimed at a younger demographic—that the TD Ottawa Jazz Festival remains an event still easily and justifiably jazz, keeping its name and continuing to be true to it.

One of the most notable achievements that the OJF has successfully accomplished in its extracurricular programming is to bring prestige artists to Confederation park, whether it's Robert Plant or Elvis Costello, who put on terrific shows last year, or this year's opening night with Willie Nelson, which was a smashing success, according to Director of Marketing, Sponsorship and Media, Suzan Zilahi, a woman who wears many hats but, amongst them all—and despite being seen in almost constant motion during the festival—always manages to take care of accredited journalists and photographers as if they were the only ones covering the festival, thanks to her own work and that of her efficient and friendly staff. Perhaps the only bump in the prestige road was the festival's booking of the Doobie Brothers—nothing but a nostalgia act at this point—but when the festival's original show with the legendary Aretha Franklin was pulled due to serious health problems, OJF, like all the other festivals now stuck with a gaping hole in their program, had to find, at the relatively last minute, something to fill that gap, and finding a group that's on tour, is in the general vicinity and has an opening on that particular night (June 26) is no small challenge.

And so, with the Doobie Brothers matching all three criteria, it may not be the most prestigious find for the festival, but it did bring a large crowd to Confederation Park and so, if nothing else, when it comes to finding acts to bolster the bottom line and fund the smaller shows at the Fourth Stage's Improv Series and Studio series—including the spectacular Dutch group Boi Akih, Norway's stellar Trondheim Jazz Orchestra and Christian Wallumrød Ensemble, ex-Ottawan, now Euro- resident saxophonist Peter Van Huffel's Gorilla Mask group, British saxophonist Courtney Pine's House of Legends, American pianist Steve Kuhn's trio with bassist Steve Swallow and Joey Baron, and so much more—well, all can very easily be forgiven.

With the addition of Dominion-Chalmers this year—a venue the festival has often used for its off-season programming, so using it makes good sense, even though it's a little farther away from the ground zero of Confederation Park (which abuts the National Arts Centre) and still within walking distance—there was a new and ideal home for acts ranging from gospel maven Mavis Staples, Cuban pianist Chucho Valdes and the Fats Waller Dance Party, featuring pianist Jason Moran and bassist/singer Meshell Ndegeocello, to African a cappella singing stars Ladysmith Black Mambazo and, closing out the series, the greatly anticipated Wayne Shorter Quintet, whose pianist, Danilo Pérez, opened the series on June 20 with a trio show that, by all accounts, was absolutely transcendent.

Of course, there's more. While the festival originally canned its late night jam sessions, citing financial reasons—and a small but very vocal group of dissenters demonstrated that there is value in making some noise—a sponsor came in at the eleventh hour and saved it. The problem? Its location in Westboro (absolutely not walking distance to Confederation Park) at the sponsor's club, AlphaSoul. Local bassist John Geggie returned to host the jam sessions, which also featured a core trio of Montrealers Josh Rager (piano) and the ever-inventive Jim Doxas (drums) for the first half of the festival, then replaced by local guitarist (and 2013 recipient of the Jazz Journalist Association's Jazz Hero Award) Roddy Ellias and ex- Ottawan/Toronto-resident drummer Nick Fraser. While it would seem to be inherently problematic in that the best chance of having successful jam sessions is to be located in close proximity to where the artists performing at the festival are staying (if not in their hotel), the festival provided a shuttle service to take interested musicians to/from AlphaSoul, a service which, based on some of the top-tier musicians who went, seemed to work. And, of course, the jam sessions have also always been heavily attractive to local musicians (and those involved in the educational TD Youth Summit) who want the opportunity to, perhaps, raise their game by playing with musicians at a world-class level. 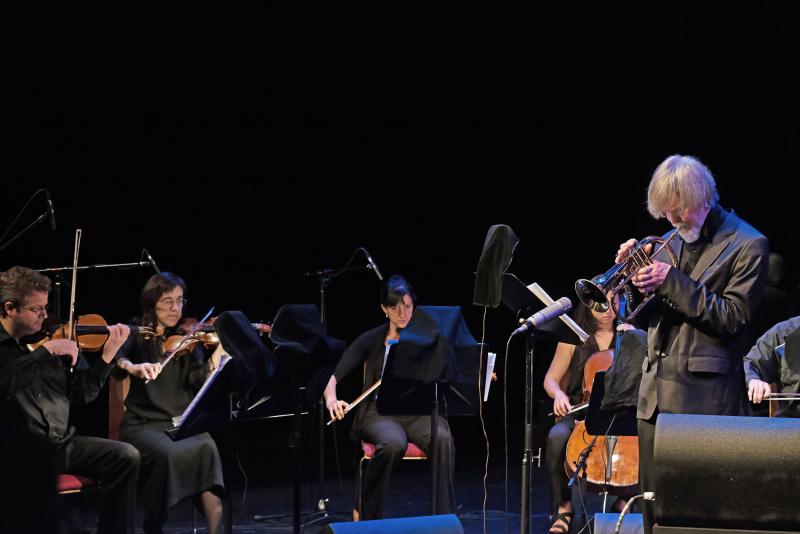 For the first time, The Brookstreet Hotel, a luxury resort/hotel located in the far west end of Kanata, will also be hosting jazz artists throughout the week, including western Canada's Hutchinson Andrew Trio (bassist Kodi Hutchinson, pianist Chris Andrew and drummer Karl Schwonik, who also played Confederation Park's Great Canadian Jazz series), Toronto's Hobson's Choice, Vancouver pianist Tyson Naylor, and Cuban expat pianist Rafael Zaldivar. It's a smart move as, despite Ottawa's relatively small size, there are those who never leave their residential areas to venture into the downtown area and so, rather than enticing them to come downtown for the festival, the TD Ottawa Jazz Festival is bringing it to them.

Sadly missing the first night of the festival and what was meant to be a superb performance by the Trondheim Jazz Festival, the following evening at the same venue, the NAC Studio, trumpeter Tom Harrell delivered a show that combined unfettered group interaction with what seemed like, at the start of the show, to be support from a local five-piece string ensemble fronted by cellist Julian Armour but ultimately became something much more integrated by the 80-minute set's midpoint.

Harrell has been working with the same core quintet ever since he began what is now a seven-year relationship with HighNote Records, beginning with Light On (2007) and culminating in last year's surprising Number Five (2012). Still, while this group now has five albums under its collective belt, Harrell's set didn't include a single track from those recordings. Instead, he looked back to three albums dating as far back as 1990's Sail Away (Fantasy), culling its popular title track, to 2003's Wise Children, whose vocal track with Jane Monheit was significantly reworked for his Ottawa performance.

But the majority of the music came from Harrell's 2001 recording, Paradise (RCA/Bluebird), which featured music arranged for a richer, more bottom-heavy string quintet that featured one violin, two violas and two cellos, along with a harpist and quintet that included bassist Ugonna Okegwo, who has been the trumpeter's bassist ever since and remains the unshakable anchor of his current quintet that also featured tenor saxophonist Wayne Escoffery, pianist Danny Grissett and drummer Johnathan Blake, whose The Eleventh Hour (Sunnyside, 2012) turned out to be one of the more unexpected (and welcome) surprises of the year. 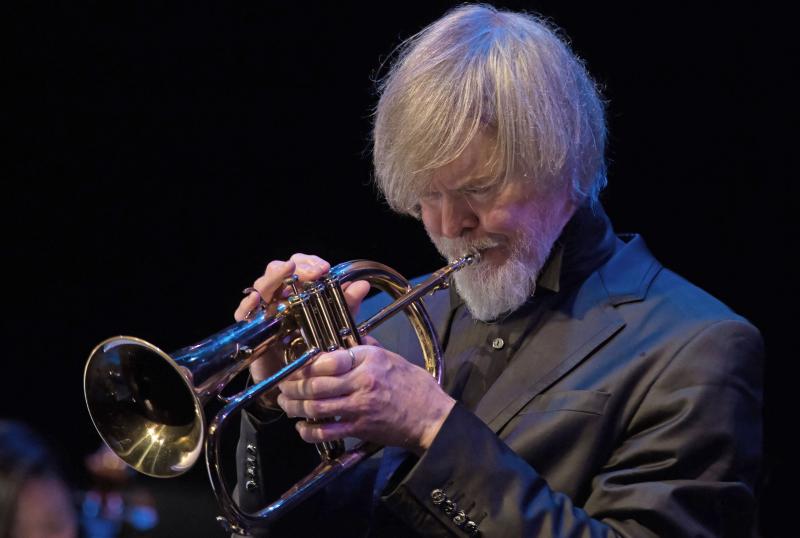 Beginning with the multi-sectioned "Paradise Spring," Harrell slowly, softly counted in the string quintet's opening solo passage only to come to a pause, where the trumpeter then counted in the quintet, reiterating the same passage but, in conjunction with the strings, becoming lusher in tone while remaining decidedly balladic. It was only when the third section came, with the quintet picking up the pace and leading to solos from Escoffery, Grissett and Harrell, that the music really began to swing, with Blake proving an effervescent player who, nevertheless, never overpowered the overall group dynamic.

Harrell's tone remains, paradoxically, one of the most buttery and pungent in jazz, whether on trumpet or flugelhorn, and while he largely stood inanimate when he was not playing—and only spoke to the audience to identify the names of his fellow players—when he picked up his horn it was something else entirely. Harrell's ability to get deep to the heart of his writing and deliver solos that combine inimitable ingenuity (that only matched the originality of his writing) with sublime lyricism has always been a trademark, but here, in a "with strings" context that, for some, turns good music saccharine, Harrell managed to sidestep that potential trap with ease.