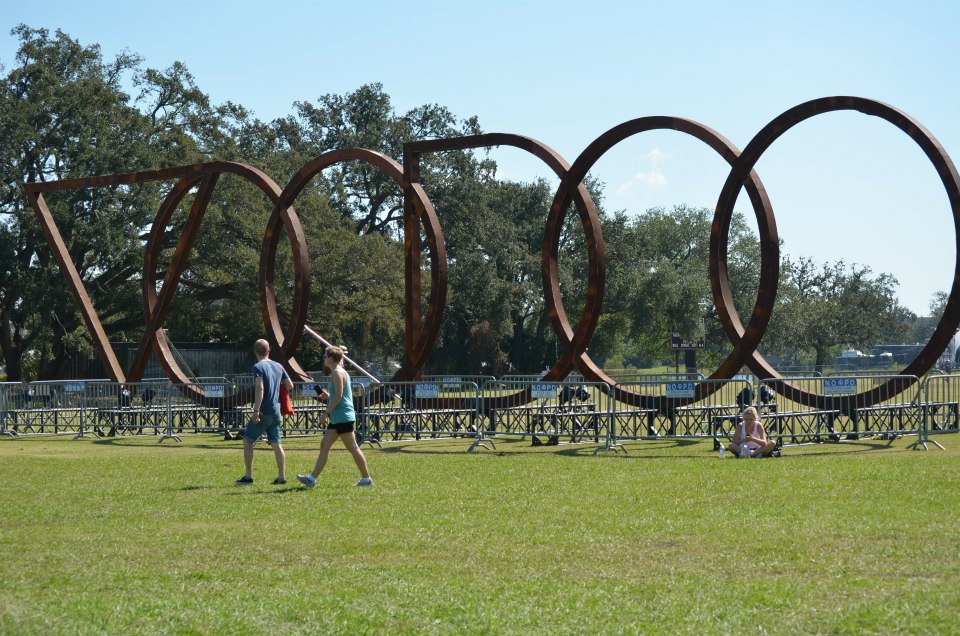 While an epic and catastrophic storm bore down on the Northeast coast of the U.S., a "storm" of another type descended upon New Orleans (a city not unfamiliar with catastrophic storms). New Orleans' 14th Voodoo Experience was a musical celebration featuring world-class food, art and interactive opportunities scattered throughout the city's fabled City Park.

The festival amusement park area included a Ferris wheel, the Ring of Fire and others. Performance artist Marcus Brown's electronic art installation project was set up just inside the gates. When revelers walked across the installation, Brown's walkway produced musical sounds, samples and loops that—depending upon weight, length of time it took the person to jump, slide, or walk across—melded into a musical gumbo that caused jaws to drop. It was not unusual to see people walk across, turn around, walk back and try it over and over.

As in past years, a marching band—the Noisican Coalition—roamed the grounds of the festival, giving numerous performances while providing the attendees with a New Orleans-influenced second line that played on self-made instruments: modified horns, household objects, percussive instruments and drums. The funky ensemble was a treat that caused festival veterans and neophytes alike to stop in their tracks and snap pictures. Additionally a fire-breathing robot rolled up and down the festival area's paved roads to a funky techno beat.

The festival's five stages (Le Ritual, Le Plur, WWOZ, Preservation Hall and SONY) were graced by artists playing almost every genre of music imaginable. The biggest draws were some of the music industry's bestselling artists and/or critical darlings such as: Neil Young & Crazy Horse, Metallica, Jack White, The Avett Brothers, Silversun Pickups, Gary Clark, Jr., Skrillex, Nas, Coheed & Cambria, Kaskade and NERVO. In addition, earlier in the day the side stages, as well as the main stages, featured acts that may not currently be well-known, may not have a national footprint or are just on the cusp of a national breakout.

Day 1 of the festival was jam-packed with performances by Gary Clark, Jr., the Avett Brothers and Neil Young & Crazy Horse on the (main) Le Ritual Stage; The TBC (To Be Continued) Brass Band, Little Freddie King, the 101 Runners and Paul Sanchez &The Rolling Road Show on the Preservation Hall Stage; Andy Suzuki & the Method, CC Adcock & the Lafayette Marquis, Delta Rae, George Porter & the Runnin' Pardners and Bootsy Collins on the WWOZ stage; Thomas Dolby, Supagroup and Say Anything on the SONY Stage; and finally Force Feed Radio, NERVO and Kaskade on the Le Plur Stage.

Friday was the warmest day of the festival. As the beautiful sunshine beat down on the park, New Orleans' own TBC Brass Band took the Preservation Hall Stage. The sparse crowd in attendance at the beginning of its set increased as the funkified performance progressed. By the end of the show, the crowd was whooping it up and dancing in front of the stage and on the benches stationed next to, and around, the soundboard. The band's set of favorites included brass band versions of Hank Williams' "Jambalaya (On The Bayou)," the Beatles' "Come Together" and Sly & the Family Stone's "Everyday People." 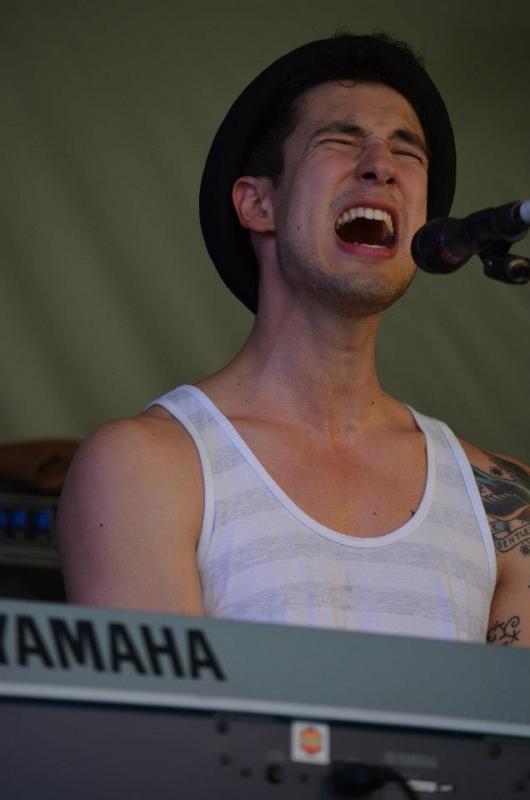 On the WWOZ Stage Brooklyn, NY's Andy Suzuki & the Method were busy laying down some blue-eyed soul with a bluesy rock edge. Their sound was a little like Ben Fold meets Billy Joel, further enhanced by a fiddle and djembe (an African hand drum). Announcing that it had flown in from New York that morning, the band was warmly greeted as it played "Her Ghost," "Take Care Of Me" (which Suzuki explained "got a huge reception during our tour of Southeast Asia"), and "Over Under."

As Suzuki and his cohorts were finishing up, the Preservation Hall Stage came to life with the electric blues of Little Freddie King. With a performance that was both aural and visual, he did his traditional duckwalk across the stage and was joined by Guitar Lightnin' Lee as they traded off lead guitar riffs. King's set was fueled by a great version of "Bright Lights, Big City," some James Brown riffs from "Sex Machine," "Bony Maronie" and other blues classics.

C.C. Adcock & The Lafayette Marquis, with its mixture of electric instrumentation and a standup bass, delivered a barn-burning set of boogie-and-roll swampy blues. Adcock had the audience in the palm of his hand as he bopped across the stage as he played with a flourish and dedicated his personal performance to Earl King. Highlights included "Maison Creole" (originally heard on HBO's True Blood) and "Fool To Care" (which was dedicated to Art Neville). 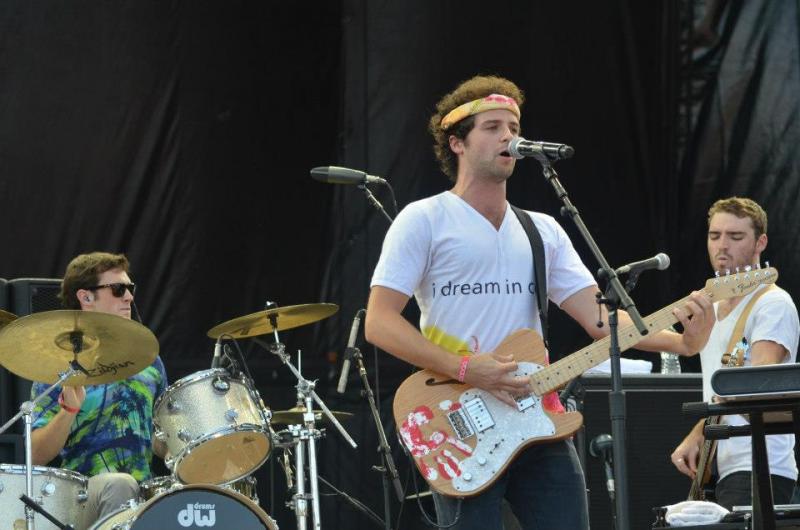 The first act to grace the Le Ritual main stage on Friday was Y Luv, appearing with lots of beach balls bearing its logo, placed strategically around the instruments. Lead singer, Freddy Janney, sporting an athletic headband and an "I Dream in Color" shirt, led Sam Nardella, Marcello Dubaz and Luke Hanna in the group's first time playing a music festival. The members of Y Luv, hailing from Los Angeles, met at the University of Southern California. The path to Voodoo began when the band submitted a video to the Red Bull Soundstage contest online, and fan support brought them to the status as one of the final five finalists. The group was selected by AWOLNATION to open the festival. The buzz around Y Luv includes its single "Driftin'" that reached number one on the Hype Machine Chart within a week of its release. The song was a huge hit with the Voodoo crowd that grew at the stage while the band played.

The 101 Runners featuring Big Chief Monk Boudreaux dedicated their set to Bo Dollis. They rocked the Preservation Hall Stage with a Mardi Gras Indian-infused set that included a "we-love-the-chief chant" for Dollis (who was laid-up at his home on Louisiana Avenue and unable to attend) and spot-on versions of "Soul, Soul, Soul," "Handa Wanda," "Shoe Fly (Don't Bother Me)," "Hey Pocky Way" and "My Indian Red."

Delta Rae swept the WWOZ Bud Light Tent like a sparkle of Southern sunshine. Formed in North Carolina, this American folk rock band was an instant hit with the hearty crowd that had gathered. Led by ethereal singer Brittany Holljes and her two brothers Ian (on guitar) and Eric (on keyboards), Elizabeth Hopkins providing vocals, Grant Emerson on bass and Mike McKee on drums, Delta Rae was named for a fictional character from the Holljes' mother's imagination of a Southern girl who could summon the Greek gods to earth. Favorites from their debut album Carry The Fire (Sire, 2012) included "Bottom Of The River," "Dance in the Graveyards" (which Ian Holljes invited the crowd to dance along to), as well as "Cold Day in Heaven" and "Whatcha Thinkin' Bout, Baby?" 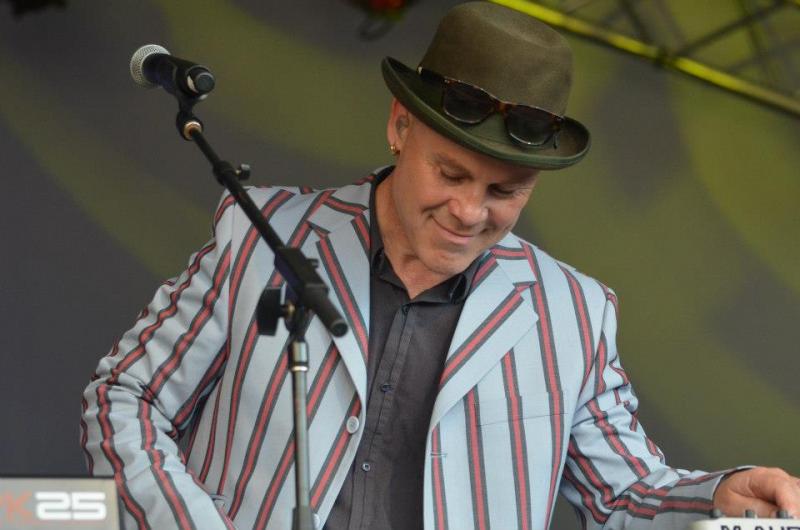 Thomas Dolby turned back the clock on the SONY stage while somehow managing to keep things firmly in the present with a set that included some old and some new (from 2011's A Map of the Floating City released on the Lost Toy People label). Dolby delighted hardcore and longtime fans with "One Of Our Submarines Is Missing," "Hyperactive," "She Blinded Me With Science," and "I Love You Goodbye" (which was inspired by getting lost on the back roads of Louisiana). Dolby, who is passionate about both his music and the advances made in technology—many of which he, himself, helped pioneer—left his Time Capsule unit at home due to the logistics of bringing the vintage trailer to the festival. In the media tent, when asked about the project, Dolby said, "the idea was that people could sit in it and leave a 30-second message to the future. I'm flying around on this tour and couldn't bring it this time. When I played Tipitina's, we parked it up the street and it got a lot of traffic and attention."

Paul Sanchez and the Rolling Road Show was up next on the Preservation Hall Stage. Featuring the talents of Arsene DeLay, Mary LeSang, Debbie Davis, Shoeless Pashley, Alex McMurray and many others, the Road Show performed high-energy versions of many of the songs from Sanchez and Coleman deKay's Nine Lives (Mystery Street / Threadhead, 2012) song cycle, based on the Dan Baum novel of the same name, that details the lives of nine New Orleanians between 1965 and 2005). The songwriters, along with actor-producer Michael Cerveris, plan to bring the music from album, A Musical Story of New Orleans (Threadhead Records, 2012) to the Broadway stage. The band and special guests brought down the house with tour de force performances of "Where Are the Bodies," "Fine In The Lower Nine," "Full Time Joanne," "Jump Out Boys" and "To Be Continued." 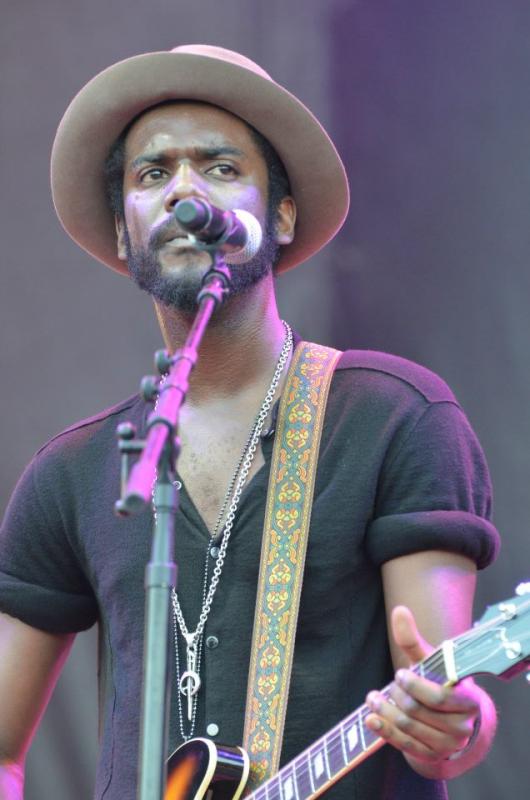 Austin, TX's Gary Clark, Jr. rocked the Le Ritual Stage with his special version of blues-drenched rock and rockin' blues. From the buzz that swirled and emanated from the crowd, it was painfully apparent to all that seeing Clark at this juncture of his career was akin to seeing Springsteen at New York's Bottom Line in 1975—he is set to explode across the musical landscape and become a very big thing in what should be a very short time. Clark then proceeded to stage a guitar clinic during his set which included stellar versions of the title tracks Blak And Blu CD (Warner Brothers, 2012), and the Bright Lights EP (Warner Brothers, 2011).

Highlights from the Le Plur stage on the first day include an afternoon set by New Orleans' own Force Feed Radio, aka Bryan Normand and Patrick Bowden, known for blending their love of bass-heavy electronic music through mix tapes and all-night dance parties. Die Antwoord (Afrikaans for "The Answer"), the South African rap-rave group of Ninja and Yo-Landi Vi$$er, thrilled the early evening crowd with "Enter the Ninja." Kaskade, aka Ryan Raddon, the Chicago native who was recently hailed by the New York Times as the "new face of electronic dance music"—despite his having worked in the genre for a decade—delivered a solid final set that showed why he has been a festival favorite and a top re-mixer for artists of Lady Gaga's and Beyonce's caliber.

With the sun having set, and the crowd grown larger as New Orleans' workforce finished its week and trekked out to City Park, Neil Young & Crazy House closed the night on the Le Ritual Stage. Though he is pushing 70 and at times looked his age, Young and Crazy Horse delivered the goods with a set that featured rarities from the '90s including the opener "Love and Only Love" and "Fuckin' Up," tracks from Psychedelic Pill (Warner Brothers, 2012) and the classics: "Needle and the Damage Done," "Cinnamon Girl," "Mr. Soul," "Hey, Hey, My My(Into The Black)" and "Like A Hurricane."