By LLOYD N. PETERSON JR.
March 26, 2010
Sign in to view read count
The Portland Jazz Festival is now in its 7th year under the artistic direction of Bill Royston. And at this point, it's pretty safe to say that this is a festival that has earned it's due as one of the most creative festivals that has not only survived the current economic downturn but has done so successfully on its own terms. Unfortunately, many jazz festivals today have to rely on the inclusion of other genres of music, especially those coming from pop and rock sensibilities. Now that's not a criticism as much as it is a sign of the times. 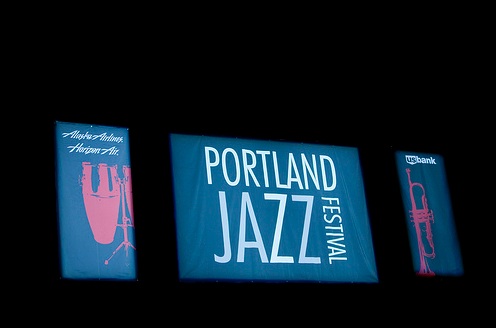 So how does a festival in the Pacific Northwest in one of the rainiest months of the year (February) pull off selling out seven of its eight major acts? The reason has more to do with the vision and creative wisdom of Bill Royston than it does any other factor. Is there a process template behind this type of success? I doubt it and tend to think it has more to do with Royston's ability to understand and perceive the make up of his audience along with his ability to share his enthusiasm with the local business community. I'm sure there is more to it than that but if I was starting a festival today or if I had one that was struggling, I wouldn't think twice about knocking on Royston's door.

This year's festival included a focus on the jazz of Norway, which in concept I appreciated but found myself wishing that Royston would have opened up the gates just a little bit more. Many of the musicians, as good as they were, brought similar approaches to their musicality. With an audience that is now clearly following Royston's lead, this creates an opportunity to open the parameters more while educating his audience on the outer fringes of artistic creativity; of which there are vast amounts within Norway and Europe. Again, this is more of a wish and I realize I am only one voice.

After saying that, I was completely knocked out by some of the performances. The Mingus Big Band was a nice surprise and pianist David Kikoski again validated his ability to swing and influence the emotional feel of a large ensemble. Seamus Blake continues to impress with his ability to take any approach of music and not lose his beautiful, deep and thick vibrant voice. There was also plenty of talk about the young 18 year old drummer, Justin Faulkner. However, on this set as impressive as his technical abilities were, I felt his musical feel was being compromised for the more crowd pleasing hand attacks. But more on Falkner later.

The solo of the night and the surprise of the festival, at least for me, came from trumpeter Alex Sipiagin. He has the X factor along with whatever that thing is that enables musicians to leave the notes on the sheet and take sound and feel to another level. 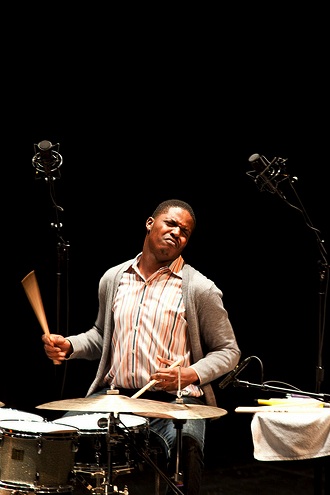 He also sat in with the Dave Holland Quintet while trombonist Robin Eubanks fulfilled prior commitments with the San Francisco Jazz Collective. I have been a big fan of this ensemble over the years but felt that perhaps over a period of time, it became a bit predictable. Holland, like his mentor Miles Davis, has the unique ability to not only assess new talent but also assess group chemistry along with the vision of the creative possibilities of the individuals and the group itself. It's just a small piece of this very brilliant and humble man.

Though I didn't feel as if Sipiagin reached the creative level of his solo in this set as he did with the Mingus set, he certainly had the chops to swing with Chris Potter while importantly, bringing a very telling fresh intense passionate spirit to the music. It was clearly noticeable and welcomed. I'm looking forward to watching this young artist as he further matures.

Since Nate Smith joined the quintet, he has developed into one of today's most rhythmically diverse drummers. His ability to seamlessly change rhythmic feels is almost spellbinding along with his encyclopedic sized rhythmic repertoire, which is just amazing. Every musician regardless of instrument should be taking notes.

Holland himself brings a joy to music and sound that can fill large rooms, which was the case here. What a beautiful soul this man must have. I have seen him perform more times than I can count but on this night, he provided a solo as soulfully enriching and poetic as any other I have been blessed to hear. 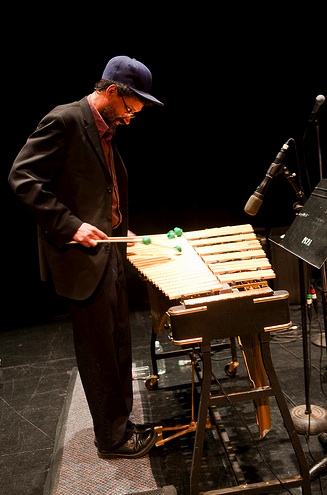 Perhaps the most underrated member of the quintet and in my mind, one of its most important is vibraphonist Steve Nelson. This is a musician who can match the creative sensitivities and humility of Holland and has the ability to build around the solid foundation that Holland aspires to. He always plays within the music with a respect that is second to none, but because of the chops in this band, can be overlooked. Importantly, he also appears to be re-inventing himself musically and artistically along with letting his emotions become more transparent. I feel this is a significant key to his more recent creative growth but perhaps that's not a surprise from such a beautiful and sensitive humble player and artist.

I have always felt the Portland, Oregon audience shared an appreciation for music that is at a higher level than most and is one of the reasons I'll make the trek to catch particular acts. Pharoah Sanders was no exception and received a long standing ovation prior to playing a note. He is an icon and wonderful representative of this important music and history and hearing his very first note was a reminder of his majestic voice and presence. On several occasions he brought out local saxophonist Devin Phillips who did himself proud in the presence of his "idol." But perhaps the stand out of this set was from the young drummer I mentioned earlier, 18 year old Justin Faulkner. This young man captured the audience with his technical dynamics and intensity but I was most impressed by his ability to get inside the music and bring the feel and time alive through his own voice. It was almost magical and one hopes he doesn't take this gift lightly. There can be a tendency for a young player to get caught up in the enthusiasm shared by the audience over dynamics, speed and flair but the truth is always in the "time and feel" which can create its own unique intensity.

One of the first Norwegian acts that I caught was the group, In The Country, which consists of Morten Qvenild on piano, Roger Arntzen on bass and Pal Hausken on drums. One of the very impressive aspects of this charismatic ensemble is its ability to take the listener to what I imagined to be the stunning landscape of Norway. The music was very in the moment and their use of spacing provided a graceful pastel texture. Additionally, their chemistry and style was also quite apparent and I was reminded of the beautiful creative late spirit of Sweden's Esbjorn Svensson. It should be pointed out that in the group's previous two performances, not more than twenty people attended but on this night, 500 plus were in attendance. That's not as much the group's doing as it has to do with Bill Royston and the new managing Director, Don Lucoff. Again, what a great job this staff has done with a festival that almost didn't survive 2009. Accolades must also go to Portland's music and arts community and their sincere efforts to work together to educate and support the greater Portland community.

On the last day of the festival, I had the honor of interviewing Dave Douglas prior to his performance at Portland's Crystal Ballroom. He would be performing with one of his latest musical incarnations, Brass Ecstasy, in memory of the late great Lester Bowie. As I mentioned in my introduction of Douglas, I believe his music will be a significant part of the tradition that future generations will be studying and researching. He has that rare ability of being able to write compositions that clearly have a respect for the past but are not bound by it. Additionally, the compositions are representative of our time and have that inherent character of courage and risk taking that seems to be inclusive of the work of visionaries regardless of the art form. The music is assessable but at the same time, it pushes the boundaries into new territories within its own creative spirit. It is a genius that cannot be taught and one that I believe is shared by not just Bowie but all the members of the Art Ensemble Of Chicago of which he was a part.

Brass Ecstasy includes players of major talent and voices and for me, was the high point of the festival. Every player ripped into their solos with majestic authority and power and turned the event into a festival all in itself. As impressive as the latest CD, Spirit Moves might be, it doesn't do justice to the actual spirit that comes roaring off the stage from these magnificent players. Luis Bonilla was a blur of epic proportions taking the trombone through the history of jazz at lightning speed while on tuba; Marcus Rojas continues to develop new possibilities in tone and color while never diminishing his power with his instrument. Vincent Chancey, like Bonilla is a former member of Lester Bowie's original Brass Fantasy but also spent time with the great visionary, Sun Ra. I was completely moved by his patience and sense of freedom in allowing the sound to grow and mature within the setting of the hall. Complete all-embracing intelligence realized through emotion and sound. 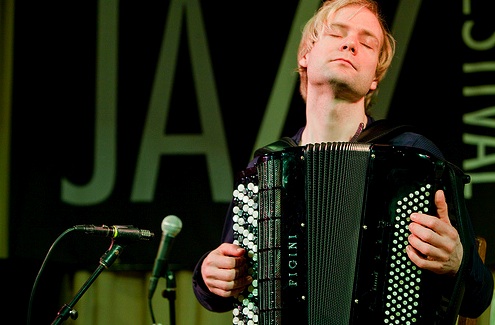 It's also worth noting the song selection in this set as it swung from Otis Redding's, "Mr. Pitiful" to Hank Williams, "I'm So Lonesome I Could Cry." I'm not sure there is another drummer other than Nasheet Waits who could seamlessly reinvent himself stylistically and rhythmically tune after tune. What a force. Then there is Dave Douglas, the leader, innovator and creative architect who never ceases to surprise whether pushing through new territories or reinventing approaches to creative universes previously traveled.

This was a festival that will be long remembered and it's important to note that the time frame of the festival was with respect to February being Black History month. Without those previous innovators along with the spirit of African American culture, we wouldn't have festivals such as this to enjoy and appreciate. A sincere thanks should go to all those that made the Portland Jazz Festival such a great success!