By GARY FIRSTENBERG
June 14, 2010
Sign in to view read count 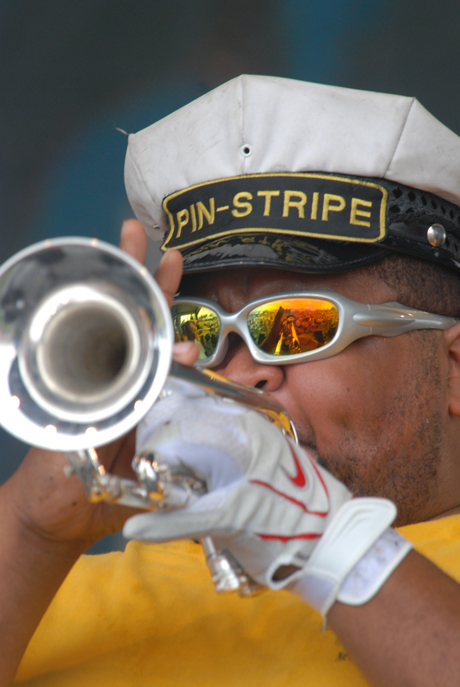 The city of New Orleans is riding high these days. With the beloved football team winning the Super Bowl, a new mayor promising a brighter future, a rebuilding of structures and economy, and a new HBO television show, Treme, extolling the virtues of the unique culture of this musical mecca, times could not be better for the 41st Annual Jazz & Heritage Festival. Like its famed cuisine, this huge music marathon offers a gumbo of sights and sounds; a diversified assortment of styles ranging from jazz to blues to gospel to rock, and everything in between. The local population is proud of its heritage, and tourists are flocking to discover the attributes of music seemingly embedded in the soil...second-line parades, zydeco bands, and Cajun dance troupes open doors to an entertaining Petri dish of musical styles. During two weekends in late-April and early-May, spanning about a dozen stages, the second oldest horseracing track in the country comes alive with a bountiful assortment of musical talent, sprinkled with areas displaying art, crafts, food, and culture, both regional and international. In a single afternoon, one could sample numerous exotic flavors...spicy jambalaya, cochon au lait po'boys, and crawfish monica, while strolling through art exhibits, blacksmith demonstrations, and even taking a ride on a folk-art inspired merry-go-round built by a Cajun woodworker.
However, it is the copious and high-energy music which takes centerstage. There is so much offered, and most of it is top quality. Within moments during a brisk stroll through the fairgrounds, one can catch funky brass from Trombone Shorty, the elegant jazz from one of the four Marsalis brothers, listen to old and 'older' classic folk-rock from the iconic duo, Simon and Garfunkel, or dance so animatedly at the fais do-do stage that the sugary white powder from the beignets will be shaken off your shirt. The trick is to dance to the music without spilling a drop of your rosemint iced tea...not an easy task.
There was a plethora of highlights at the festival this year, including several powerful tributes to recently-deceased local blues legend, Marva Wright. Here are some of the knockout performances:
"When The Saints Go Marching In" took on new meaning because of the success of the football team, and jazz giant, James Rivers, added a new wrinkle, playing a quirky version on bagpipes, mixed with snippets of "Amazing Grace" and "Hava Nagila," which means 'let us rejoice.' 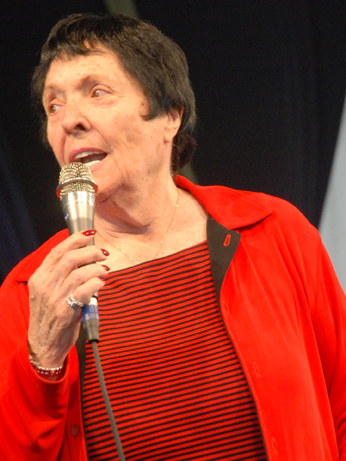 The 100th anniversary of Louis Prima was celebrated in high-stepping style, with separate sets by his son and daughter, and a wonderful tribute from Bobby Lonero, former guitarist with the maestro. The most heartfelt performance was turned in by Prima's former partner, Keely Smith, looking resplendent in a bright red jacket and her signature pageboy haircut. At age seventy-eight, she charmed the audience with nice renditions of "Up A Lazy River," Let The Good Times Roll," "That Old Black Magic," and "Jump Jive And Wail." Her voice was as strong as a hurricane, and her phrasing was like finely-cut glass.

Ex-Band drummer, Levon Helm, recently famous for his Woodstock Midnight Ramble sessions, in his barn in upstate New York, enthusiastically led a stellar group of rhythm and blues musicians, including former Bob Dylan guitarist, Larry Campbell. This was a marvelous show, with pure versions of New Orleans chestnuts such as "Such a Night" (with help from pianist, Dr. John), and "A Certain Girl" (performed with another titan on the keyboard, Allen Toussaint). The horns, led by Howard Johnson, blared fervently, and the tight rhythm section chiseled away at classic R & B melodies. The set reached an apex with a gorgeous version of The Band's "The Weight," as Levon flung his drumsticks into the crowd. 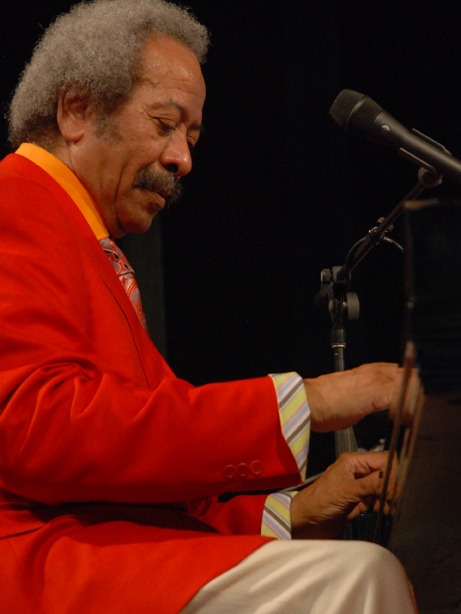 Speaking of Allen Toussaint, he kept very busy this year...he guested with such diverse artists as Helm and Elvis Costello, and played his own sets; one was straight rhythm and blues classics, and the other culled from his Grammy-nominated jazz recording, The Bright Mississippi. All of his shows exuded excellent musicianship and a fertile palette of rich melodies, both old and new, tried and true. One of the great things about New Orleans is that the music is non-stop; over forty venues around town have performances when the evening sun goes down at jazzfest; it is not unusual to take in more music until the wee hours of the morning. Offbeat places like bowling alleys, coffeehouses, and even laundromats turn into honky tonks when the neon begins to burn. Toussaint participated in one of the more moving and memorable performances...at the Jazz Shabbat service at Touro synagogue. Upon the conclusion of the religious Friday night service (with musical accompaniment from the Panorama Jazz Band), Toussaint played elegantly in this sacred setting, tickling the ivories on a medley of Professor Longhair-inspired tunes, singing passionately on "The City Of New Orleans" and Paul Simon's "An American Tune," and capped the evening with musical accompaniment from David Letterman's bandleader, Paul Shaffer...together, they performed exquisitely on "St. James Infirmary." The crowning moment as a foot-stomping version of "When The Saints Go Marching In," accompanied by the choral group in Hebrew! Only in N'awlins...Mazeltov, y'all!

The jazz tent was great place to seek shelter from the heavy rain, and Maurice Brown made it even more appealing with his steamy set of Hank Mobley-esque soulful jazz and blues. You could get the mud off your shoes by vigorously stomping your feet to the tunes.

Donald Harrison, dubbed a one-man jazz festival, alternately performed as a Mardi Gras Indian and led a straight-ahead jazz band on two separate stages. Another musical stalwart of the Crescent City, Terence Blanchard, played on several stages...he led his own group through moody and inspiring melodies, accompanied by percussion virtuoso, Danny Sadownick. In addition, Payton jammed with Preservation Hall Jazz Band, and most memorably, added a carnival-like ending to Simon and Garfunkel's "Cecilia" at the end of their set...the song also included guest accompaniment from Dr. Michael White on clarinet, and Dwayne Dopsie on accordion, which put a New Orleans spin on the whole affair. 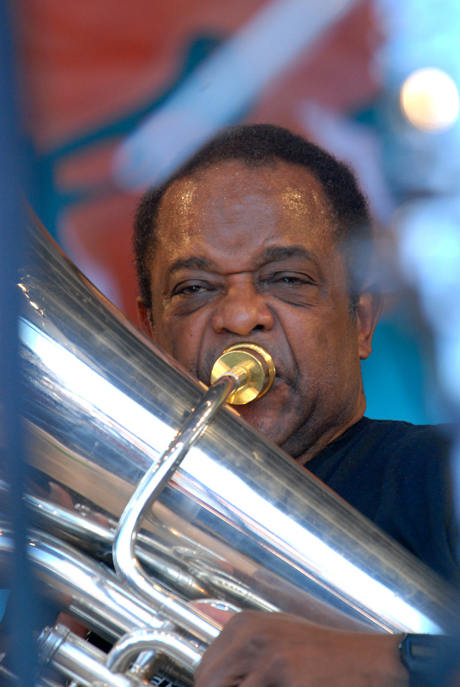 Local tuba and sousaphonists, Kirk Joseph and Matt Perrine, performed wonderfully, tapping into the second-line style on several compositions, and inflating a full sound on Chuck Berry's "Maybellene," and other funky tunes.

Chicago-bred trumpeter, Mario Abney, proved his sense of timing beyond his years. His youthful, yet well-versed band played scorching bebop and blues. In the original "Water Sweet Water," "Dedicated To His Mother," Abney performed with exquisite precision. He is one to watch in the future.

In a misty rain, Van Morrison bridged the gap between jazz, R & B, and pop music; his honeyed voice was strong, and he added a spiritual feeling to many of his songs. On "Brown-Eyed Girl," he even played an admirable saxophone. 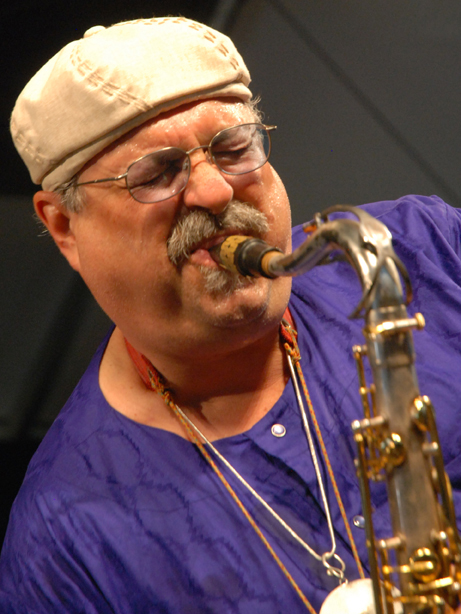 Joe Lovano and Us Five brought bebop in high style to the jazz tent. There was a beautiful Marcus Miller tribute to Miles Davis's album, Tutu, and a guitar woodshed featuring Steve Masakowski (from Astral Project), Jake Eckert (from Dirty Dozen Brass Band), and Todd Duke (accompanist for a lot of local bands). The guitar woodshed featured greasy versions of "Back At The Chicken Shack" and "Flood In Franklin Park." These guitar impresarios had fingers flying across the fretboards like lightning.

For a change of pace, comedian Steve Martin and the Steep Canyon Rangers, performed eloquent bluegrass from his recent Grammy-award winning album. Even the encore, "King Tut," sounded sweet in a countrified version. Musical chameleon Elvis Costello, worked with his current band, The Sugarcanes, and also put an Appalachian spin on his music, including a gorgeous version of "Alison." The ever-present Allen Toussaint joined Elvis on an acoustic, yet rocking, version of "Leave My Kitten Alone."

The great improvisational jazz quartet, Astral Project, played a strong set of original and traditional tunes...including the title track of Voodoo Bop. Bassist, James Singleton, strummed his upright with great intensity, and his face contorted like a Picassso piece of abstract art. This was another overwhelming crowd-pleaser. 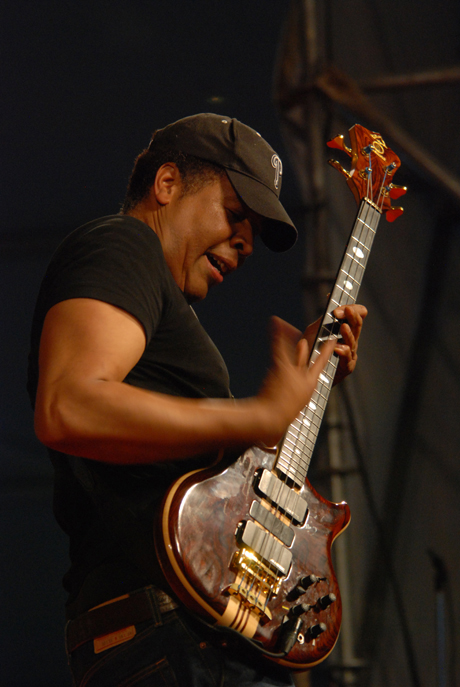 Stanley Clarke's thunderous electric bass-playing was so heavy, it could sink an oil derrick. His piano accompanist, Hiromi, shook, rattled, and rolled like a jazz version of Jerry Lee Lewis...her animated image was startling and joyous.

Producer Quint Davis introduced guitar virtuoso, Jeff Beck, as the greatest guitarist in rock and roll history. The stringman lived up to the hype, performing with precise power on a varied set, including "Birth of the Blues," "Over The Rainbow," "A Day In The Life," And "I Want To Take You Higher." His band was extraordinary, and the energy of this set will go down as one of jazzfests finest performances. Beck was handed a bouquet of flowers at the end of the set, and he unselfishly threw them to his audience.

Brian Blade played drums emphatically and proficiently with his own band, as well as with Wayne Shorter...two stunning sets. Also accompanied by John Patitucci and Danilo Pérez, Shorter turned the jazz tent into a sanctuary of sacred sounds. On "Joyryde," played with extreme cohesiveness.

There were numerous other highlights by a diverse assortment of musicians, including The Zion Harmonizers, Irma Thomas, The Neville Brothers, and B.B. King. King told the crowd he asked Saint Peter for a few more hours...at the age of eighty-four, his voice is still strong, and his playing on Lucille, his signature guitar, was terrific. In the Economy tent, ninety-eight year old trumpeter, Lionel Ferbos, performed like a man one-third his age. There was also a beautiful tribute to vocalist, Juanita Brooks, handled elegantly by Leah Chase, Betty Shirley, and Germaine Bazzle...the crowd was dazzled by a nice rendition of the fitting "There Will Never Be Another You."

Davell Crawford (son of Sugar Boy), hit all the right keys on his version of Randy Newman's Louisiana 1927, which brought tears to the eyes of many audience members, who are rebuilding after Hurricane Katrina. An exciting finish to the show included Dr. John and Jon Cleary joining Davell on one piano...it was thirty fingers of rhythm and blues heaven. 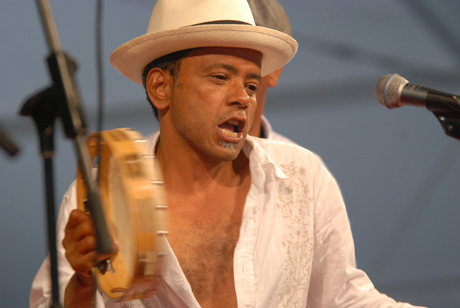 Finally, John Boutte, whose singing is reminiscent of Sam Cooke, added depth and breadth to "Basin Street Blues" and "Good Neighbor." He told the crowd that he was asked to play that evening at Preservation Hall, and the show started around midnight...his response was "Sure, I like early gigs." This proves that New Orleans is a 24-hour music city. So, hop on board that Streetcar named Desire next year, and you will be delighted, invigorated, and fulfilled by a festival replete with great music. And if you don't already know how to do it, you will certainly learn the art of eating crawfish...it is a fine mess!