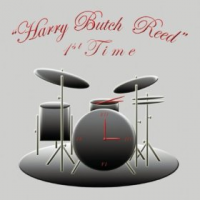 The attributes of exceptional drummers include superb timing, sensitive touch and self-expression of which Harry "Butch" Reed displays on his auspicious debut 1st Time . The Philadelphia-based player is a prime example of a talented musician that's worked to hone his craft over time. In a satisfying program that includes straight-ahead jazz delivered by Reed and equally impressive band members the music yields a wealth of enjoyment.

It is one thing to have technique but quite another to possess musicality. These pieces swing with melodious energy echoing the sentiments of the past and the present. It would be easy to make comparisons to more recognized names but Reed's skillful band proves that jazz is an expressive art-form that still thrives heard in the drummer's spacious drum and percussion opening in "Let's Go" and the radiant tenor work of saxophonist Greg Riley in "For You, Joann" as well as Matthew Parrish's powerful bass solo in the soulful "Circle of Love."

With original music mostly written by Reed the compositions focus song-like tunes with deep-pocketed theme in the blues groove "Love's Secret." But lighter motifs are found in the airy "Dancing in Five" with some wonderful acoustic guitar from multi-instrumentalist E. Shawn Qaissaunee and the Latin-flavored "What Time Is It" where Riley's bass clarinet serenades with supple piano comps and explosive drumming at the close.

The closing "Trip to Africa" is inspired by Reed's travels to Uganda, Ethiopia, Zambia, and Ghana in 2009 with jazz musicians including violinist John Blake. It's an infectious piece colored with the sound of varied drums, mysterious percussion and what sounds like locusts. What is clear throughout this debut is that Reed is not only a skillful musician but one with a keen ear lending credence to the Indian proverb that "A good drummer listens as much as he plays."

Let’s Go; Wakeup Blues; For You JoAnn; Edenfred; Circle of Love; Love’s Secret; Dancing in Five; You Don’t Say; What Time Is It; Trip to Africa.